Should You Turn Off Your Computer or Leave it On? 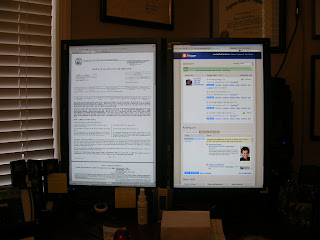 But Windows changed all that.  The program takes forever to boot and to shut down.  The much touted "instant on" operating system has yet to come to pass (why not?  Memory is cheap and a hard-wired OS it technically feasible).  So many folks took to leaving their computers on all the time.

At first, this seemed like a waste of electricity, but then the government stepped in with its EnergyStar requirements, and now we can all feel like we are saving electricity by allowing our computers to go into a "sleep mode" when not in use, rather than shutting them down entirely.

Until recently, I did just that.  However, lately, I have been shutting my computers off at the end of the day.  Why is this?

Well, for starters, even in a sleep mode, computers and particularly monitors, use energy.  If you feel the heat vents on a flat panel display when they are shut off, they are quite warm.    And some displays will not shut off, even if you turn them "off" (they go into standby mode instead).  So killing the power and the power supply is the only way to fully shut off a computer in some cases.

Rebooting on occasion is also good for Windows, as it tends to clear out the backlog of temp files, open file handles, and other half-assed things Windows does on occasion (as well as many applications, such as Adobe Acrobat).

Are there any energy savings?  Perhaps, but not much.   As this thread notes, most computers, when running draw less than one amp, with the displays being the major draw in power.  For a large office building, this could, of course, add up to a lot of power cumulatively, but then again, so can leaving the lights on (which many offices do as well).  We are talking perhaps a 10 cents a day in power, perhaps.  Not much.  But over a year, that does add up to $36.50 in savings.   For a large company with 1,000 computers, this could be as much as $36,500 in electricity, assuming each computer uses 100 watts during off hours.

One could also argue that those 100 watts also need to be offset by air conditioning, which would generate other savings.  You may not think 100 watts is a lot of heat, but it does add up and does make a room warmer.  I notice my office is distinctly warmer than the rest of the house, mostly due to the computers, monitors, printers, and other electrical appliances running.

Some folks would argue that cycling the computer on and off creates more wear on the computer, as it goes from room temperature to operating temperature and back again - thermal cycling.  There may be some Engineering truth to this, of course, but I don't think it significantly degrades the product life of the computer - it will be obsolete long before it wears out.  And most computers these days fail due to overheating rather than heat cycling.

Parasitic electrical draw, on a household scale, can add up, however.  We have three computers (plus a laptop), and maybe a dozen wall-pack transformers, for everything from the DSL modem, to the router, to my cell phone docking station, to a half-dozen office phones, clock radios, weather radio, and the like.   Add this all up, and you may have a fairly large chunk of the non-HVAC portion of your electric bill.

Leaving the computer on all the time also allows it to update software.  Automatic software updates can be very annoying, as each manufacturer decides when it wants to update its software, and oftentimes, the updates are cosmetic or to add "features" you don't want.  For example, some newer versions of Windows Media Player as just plain annoying.  I prefer the older version.

And of course, with a computer you use infrequently, like a laptop, all these programs decide they are overdue to "phone home" the moment you turn on the laptop, usually at a limited bandwidth Wi-Fi location.

So there you are, 10 minutes before your flight, and you want to check your e-mail.  Your computer decides that a 10GB Windows Update is a better idea and starts to download it.  You try to abort it to get on the plane and screw everything up.   Worse, for the rest of your trip, your computer keeps trying to do this update, every time you turn it on - even when you have 20 minutes of battery life left.

For these and other reasons, I turn most update settings to "OFF" and then update manually once in a great while.  I have found also that sometimes a manufacturer will send an update, only to later find it was bug-prone, and then have to send a second update to fix the first one, but by then, your computer has crashed.

When you computer is on for long periods of time unattended, it could also be vulnerable to attacks by other computers, if your firewall settings are not properly set up or your firewall is off (a surprising number of people have no idea how to set up their firewall or indeed if they even have one).  Perhaps it is a rare event, but it is a little scary sometimes, if you do go to Windows Firewall and read about all the pinging of your address that is going on from computers in Russia or wherever.  Just the barbarians at the gate, testing the locks.  Nothing to be concerned about.

Recently, I had to install a new hard drive and reinstall Vista (ugh).  One annoying feature of Vista is the indexing feature, which you can disable, sort of, only after a lot of effort in obscure tabs and pages.  It will sit there and grind away at your hard drive for hours, indexing files, a tacit admission that the underlying program is incapable of finding anything in a real hurry.

This constant head-seek annoys me, although I suppose it doesn't wear on the voice coil or anything (although why did my last drive fail again?  Turns out it was low rpm - maybe from being on all the time?).

So lately, I have been shutting off the computer.  Maybe it saves a couple of bucks a month (hmm... that's a free beer, and we like free beer) and it also discourages me from casual web surfing.  If the damn thing is OFF, I am less inclined to turn it ON.
Newer Post Older Post Home