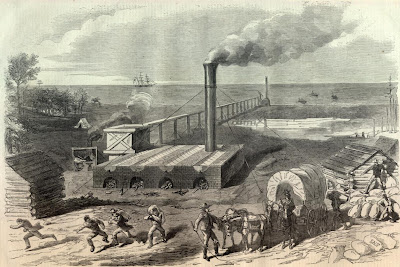 The ideal behind the factory is that everyone works together for a common good, trying to increase productivity and profitability.  It is an ideal rarely achieved.  In many American factories, people work at cross-purposes, and often decreasing productivity results in higher profits for the individual.
When I was 18, I went to work for General Motors as a Co-Op student.  They thrust me into a number of jobs, everything from working the metallurgy lab to being temporary foreman over a dozen men twice my age, to the dirty and dangerous job of working in the forge plant.

One job which foreshadowed my career as a Patent Attorney was the suggestion department.  GM had a system whereby employees could submit suggestions to improve productivity.  And if the idea was adopted, the employee would get a monetary reward equal to a percentage of the first year's savings.  Often, this could end up being a lucrative amount of money.

One fellow, an old machinist, had an idea to use a dial jig on the ball cage presses.  By using this simple idea, it kept the operator's hands away from the press.  They put the blanks into a dial-shaped disc, which when turned, moved the blank into the mouth of the press.  The finished piece could be removed from the press, even when the press was in operation.

It was a good idea and saved a lot of time and was an obvious safety improvement.  The suggestion board approved a monetary reward for the machinist.  My job was to determine how many man-hours were saved using this idea.

And therein lied the problem.  As it turns out, the foreman was rated for his department based on how many hours per 1,000 pieces his department cranked out.  The employees, of course, were paid by the hour (piecework bonuses was one of the first things the Union scotched, years ago).  But the foreman was charged with getting the requisite production out of his employees, based on tables, set up years prior, rating the "standard" production rate for each part.

Like any rating, it was uneven.  Some parts were harder to make than others and took longer, and others were far easier.  And the ratings charts did not reflect the actual rates in the field.  The foreman had long ago accommodated this in two ways.  First, he would offset a part where the rating was not in his favor, by the more favorable ratings for other parts.  And Second, he would run off a few thousand or tens of thousands of "easy" parts to up his production numbers.

The net result was, that management had no idea how long it really took to make these parts.  And also that we made a lot of parts that were then scrapped immediately as surplus, in order that the foreman could "make his numbers".  The Japanese would surely be puzzled by this phenomenon!  After all, they learned their vaunted productivity ideas from us.  And as you may have guessed by now, that plant is closed, now converted to a warehouse to sell cheaply made Chinese goods.

All of that of course was bad enough.  But since the dial jigs increased productivity, the foreman was loathe to sign off on the new numbers.  He used the increased productivity to make himself look good and to offset some of the bad rating numbers on the "dog" parts.  And as a result, the machinist did not get nearly as much bonus as he should have, for his innovation.

When I asked the foreman, he explained all this to me.  I asked him why the standard numbers weren't just changed to reflect reality. After all, they were just numbers in a book, not laws of nature.  But that opened a whole new can of worms.  If they changed his production goal numbers, all the other disgruntled foreman would want a review of their numbering system as well!  So it ended up being an impasse, where the status quo was preserved, even though it made no sense.

By the way, the Patent Office has a similar problem - production goals based on obsolete or politicized data, so that some departments have days to examine simple cases, while others have mere hours to make a Patent-ability decision on complicated subject matter.  And the idea of adjusting the numbers ends up falling on deaf ears.

As it turns out, in many organizations, there are enemies to productivity - situations where it makes more sense to be less productive, or to be wasteful, rather than to be productive and efficient.   And usually this is because the incentive system is set up to encourage people to "game the system" rather than get the work done.

Overtime is an example of this problem.  In some factories, people intentionally "slow down" production so as to create the need for expensive and profitable overtime.  If management needed a project done by a certain deadline, you can be sure that overtime would be required.  Workers actually slow down in response to production pressure.  It is amazing to me that anything gets done at all.

Assembly lines are one way of enforcing work discipline on workers.  But they can be abused, and if run too fast, parts simply don't get tacked on properly.  So the enforcement of the line often can backfire, as products are sent back for "re-work" or the quality drops off.

What amazes me continually is that no one seems to have figured this out.  We have some of the brightest managers around coming out of management schools, and yet no one seems to understand that when you set up productivity goals, these goals often serve to detract from productivity, as people spend more time spoofing the goals than actually meeting them.

Back in the day, we had something called "Industrial Engineering" - the idea that you could figure out, scientifically, the best way to perform a task and how long a person should take to perform such a task, in a humanly possible and humane way.  Americans were leaders in Industrial Engineering, and we exported our ideas overseas, where they were eagerly snapped up by the Japanese and Germans - who became efficiency experts as a result.

In the last 50 years, however, Industrial Engineering has been viewed as a quaint anachronism - if not an outright fraud.  Some Industrial Engineering gurus, it seems, fudged their data to show increases in productivity where there were none - or little - in order to collect lucrative consulting fees.  But it would seem that we Americans threw the baby out with the bathwater - and discredited the entire science, rather than try to improve upon it.

And again, I think this is mostly an American phenomenon.  Overseas, if someone doesn't work, they are fired.  They are not afraid of annoying a Union leader by trying to figure out how long it should take to put a bolt on a car.  It may be a harsher system, to be sure.   But it is a lot harder to spoof productivity goals in Japan or Korea.  And this is why their companies can produce products at lower costs - even here in the USA.
Newer Post Older Post Home