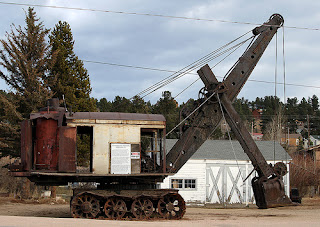 
I read this anecdote the other day, and I'm sorry but I can't remember the source for it.  If someone can point it out to me, it would be appreciated:

At the height of the Great Depression, millions of men were laid off from their jobs.  Unemployment was at 20% or more.

At a downtown construction site, work was underway to build a new skyscraper.  A modern steam shovel was being used to excavate the foundation for the skyscraper.  Two unemployed men looked on at the work in progress.

The first one looked at the steam shovel and remarked, "You know, that steam shovel is taking away jobs that could have been done by men!  It easily has replaced at least 100 men with shovels!"

The point of the story is that decrying automation is silly and futile.  And eliminating automation to "preserve jobs" is utterly stupid.  And yet people - weak thinkers - routinely propose this sort of nonsense, as if eliminating some labor-saving device is the answer to all of our problems.

And indeed, to some, this is literally a religion.  The Amish eschew some, but not all, labor-saving devices.  But their argument is one of a religious nature, not an economic one.  When laboring for money to pay their tax bills, the Amish use (but do no own) compressors, air tools, cell phones, and other modern conveniences.  And I know this, because I've hired the Amish to work on my home and seen the incongruity of an Amish on a cell phone.

This is not to suggest they are hypocrites, only that even they are practical and realistic.  They know that they cannot pay their tax bill if they have to labor with hand saws and hammers.

But in industry, we do see resistance from Unions, in particular, to automation - "replacing a man with a machine!" they cry, when what they really mean is "machines don't pay union dues!"

But the flip side of the coin is that increasing productivity means lowering costs of goods, which in turn means a higher standard of living for all of us.

Unfortunately, most of us never get to see the vaunted labor-savings of labor-savings devices.  While come countries, such as France, have tried to go to a 35-hour workweek, in the USA, it seems that, if anything, people are working harder and longer hours.

Those same restrictive work rules and onerous benefits packages mean that it is cheaper to pay someone overtime - to work 50-60 hours a week - than it is to hire two people to work 30 hours a week each.  The basic overhead of employment is so high today, that you have to flog an employee like a coal mine mule, to make any money out of him.

So it is not necessarily the labor-saving devices that are causing job losses.  But rather we have the conundrum of a very few people working very hard to make a lot of money, while a lot of people work not at all.

And if you asked the guy working 60 hours a week if he'd rather work 30, he'd say "yea" - but want the same pay.  You see, people in this country who make a lot of money ($100,000 a year or more) squander it faster than ever before.  So they "need" a higher income to get by, even as the cost of goods and services drops, due to automation.

It is an interesting conundrum.

Because when it comes right down to it, who wants to dig with a spoon?
Newer Post Older Post Home