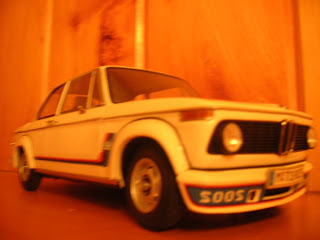 The venerated BMW 2002 Turbo (here shown in model form) was, when it was all said and done, just a car.  And by today's standards, really not a very nice one.
Cars.  Men love to obsess about them.  And people spend their whole lives devoted to them, spending countless hours working on them, washing and waxing them, detailing them, and of course, driving them.  And then they spend countless hours on websites talking about them.

Funny, but for some reason, people don't obsess as much about, say, refrigerators or dishwashers.  Can you imagine a website devoted exclusively to the 1957 Frigidaire?  I can't.

But cars are appliances.  They are stamped out of steel, welded together, and a motor installed, just like a refrigerator.  And many folks like to imbue certain cars with powers that, well, really they don't have.

Poorly made muscle cars of the 1960's and 1970's fall into this category.  We all wanted these cars as kids, and now as adults, we can afford them.  But they are just stamped-steel unibodies, often with truck engines installed, riding on primitive live-axle suspensions (sometimes with leaf springs in the back!) and horribly bad bias ply tires up front.

And many had brakes that were so weak they couldn't pull a hobo off your sister.

The build quality was horrific, the interiors made of cheap vinyl over cardboard, and the overall content was, well, just a cheap empty steel box with a big motor, that's all.

But folks obsess about having a "Boss 302" or a "Hemi" or whatever, as though these were finely made Ferraris, and not just cobbled-together marketing efforts based on plebeian sedans, with a few "performance" bits, such as fake scoops and hood tachs, tacked on.

Styling is what sells these cars - and we all liked the muscular stance and styling of them.  So much so that the carmakers are now bringing them back - Mustang, Camaro, Challenger.  But of course, once again, these are hardly fine sporting machines, but just the basic car platforms owned by the big-3, with "muscle car" bodies tacked onto them.

In a way, it is like the "New Beetle" - just a Jetta with "tortured sheetmetal" and not half the space capacity of the underlying vehicle.

I do respect someone who actually buys and restores and maintains an older car themselves, as this does take some real hands-on talent to do.  But the mere ownership is really nothing special.  Anyone middle-class person can choose to own just about anything, often merely by choosing not to fund their 401(k).

I have reached the point in my life where cars are more and more appliances to me.  While I enjoy them, what I enjoy more is financial independence - the ability to be financially secure and to not have to work.  And having a hobby car often detracts from that goal.

And owning a hobby car that you never drive - or drive once or twice a year - makes no sense at all to me.  My neighbor has two of these, a '74 El Camino and an '85 Camaro, and is finally selling them.  Another neighbor has a '57 Chevy that sits in the garage for 364 days of the year.  He can say he owns it, but other than a garage-clogging nuisance and an once-a-year parade float, I am not sure what the point is.

And no, old cars are not usually a good investment.  If you restore one, expect to get 50% back on your money.  And if you keep it, generally it appreciates at about the rate of inflation.

However, if you use our old friend, the compound interest calculator, you'll see that $2500 invested in 1960 at 8% would be worth, after 50 years, $117,000.  In other words, about the same rate of return as in the stock market.  There is no real great investment here, and this does not factor in the storage costs for 50 years.  And of course, that would be if you never drove the car, or if you did, spending tens of thousands of dollars restoring it, perhaps multiple times.

So keep that in mind, when it comes to cars.  They are just appliances, not living things.  What you do with them is more important than the mere ownership of them.  Don't fall for the hype of the hobby industry (often promoted in magazines that are owned by or sponsored by the people who sell you parts).  Because, like a teenager throwing money at his Mom's Honda, you can end up just squandering a ton of dough this way.