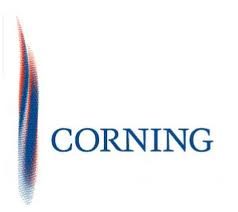 Corning Glass might at first appear to be another one of those rust-belt companies that stagger on in Central New York.  But it actually is a high-tech corporation with high profits and a low P/E ratio.
Today on CNN, they list the "top 20 tech companies" in terms of profitability.  The usual suspects appear, of course - Microsoft, Google, HP, Intel.  But clocking in at #9 with a bullet, is Corning Glass.

Corning?  A high-tech company?  Who knew?  And profits of $3.6 Billion on sales of $6.6 Billion?  That is a pretty amazing profit margin.

And the rest of the company's numbers look impressive as well.  The stock is trading at a little under $20 a share with a P/E ratio of an attractive 8.84, a dividend yield of 1.02% (better than a CD, these days) and earnings per share of $2.203.

For a "high tech" company, these are not bad numbers.  And with the explosion in smart phones and tablet computing - not to mention flat-screen displays in general, the company's "gorilla glass" might continue to increase in market share, as it did last year.

Of course, stock-picking is always fraught with peril.  Gorilla glass may be the next big thing, or not.  Maybe after two years, it shatters into a billion pieces, because of a chemical effect that escaped notice during the testing phase.  Maybe their Patent will be held invalid and others will copy it - for less than half the cost.  Maybe, maybe, maybe.  Investing is all about risk-taking.  And when you buy a share of stock, you have to hope that horribly bad things don't happen while you are a shareholder.

I recently found an old Louis Auchincloss book at the local library.  They were throwing it away - Portrait in Brownstone.  I picked it up because I met his brother when I was growing up in Cazenovia.  My Mother was enthralled by old money like that.  Today, no one gives a damn and the library throws out his books.

This lead me to check out some of this other books (East Side Story, House of Five Talents, Honorable Men). Honorable Men was an interesting story, as it follows the life of "Chip" Benedict, an heir to a glass empire.   Chip. Glass.  Get it?

Anyway, in one part of the novel, his brother-in-law persuades him to build a glass museum near the factory in upstate....Connecticut.  The museum gets out of hand, goes way over budget, but becomes an renown institution of its own.

Sounds like a familiar story, no?  I'm surprised the Houghton family didn't sue him.

I had always assumed that Corning was one of those old-line rust-belt manufacturers whose carcasses litter the Central New York landscape.  Perhaps I assumed wrongly. 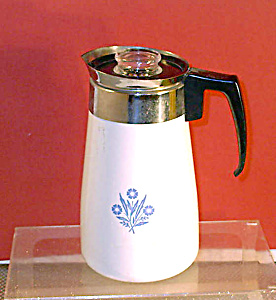 I had one of these that I bought at a garage sale - and later sold at a garage sale of my own.  The infamous Corningwear stove-top percolator.  You can't kill these, even if you drop them.  Corningwear is now made by World Kitchen and the trademark licensed from Corning.
Newer Post Older Post Home