The End of the World Timeshare Resales, Inc. 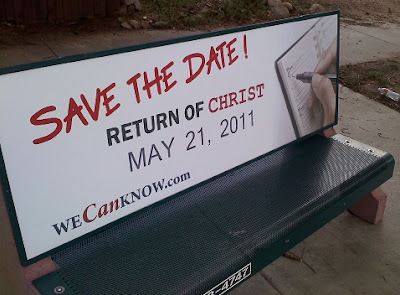 We laugh at people who believe in silly nonsense like the world ending yesterday.  But yet, we all engage in group-think on occasion - and end up believing in illogical things that are against our own best interests.  The May 21 doomsday cult should be a wake-up call to all of us that our society is not as advanced as we would like to think it is.


End of the World and Timeshares.  What do they have in common?  Both ideas are sold in large rooms full of people, who each reinforce the others beliefs, to the point where a group-think emerges and people will start to believe anything.  This is why you shouldn't go to a Timeshare sales promotion - or to an evangelical church for that matter.  You may think you have self-control, but within an hour after you get there, you'll start to think that "investing in your vacation" makes sense, as does end-times theology.

And of course, for the record, both are utter bullshit.

But on a larger scale, we all get sucked into group-think every day, either through the mass-media, or in our own social circles.  People who watch television tend to think it represents a "norm" and that what is presented on the news shows is "informative" - because everyone on television treats it so seriously.  Few bother to look at the superficial treatment of the "news" on the news, and few question why it is all written at an 8th grade level or below.  The few that do, turn it off.

But even on a smaller scale, we are influenced by our peers and friends.  Our own social circle validates our own ideas and reinforces them.  And this includes which products to buy, who to like, who to hate, which politics to believe in, and so on.  The so-called "word of mouth" begins here, and it is a powerful force and one that marketers dream of capturing.

And sorry, Angie's List, you didn't succeed at that.

So on Facebook, Suzie clicks on a button and her Facebook page declares that she "Likes" Chi-Chi's crappy fake Mexican food.  Now, this normative cue has been suggested to all of Suzie's friends, and also is endorsed by someone in their peer group.  It is a very powerful thing to attempt to harness, and increasingly, social networking sites, like Facebook and all the wanna-bes, are harnessing this energy - using the power of people to unwittingly shill for a large corporation (which is why I am no longer on Facebook).

And yet, people who spend an hour a day on Facebook, declaring their dying loyalty to Chevy or Ford, or to TGI Fridays, or whatever, look askance at some "End-Timer" who believes the world ended yesterday.  After all, only a fool would believe such a thing.  And of course, those Tex-Mex Nachos at Chi-Chi's sure are yummy!  Particularly when washed down with a "Lite" beer!

Whatever the answer is, on a personal level, the answer is clear.  Making yourself into a shill for someone else's business, or interests, or religion is rarely going to profit you personally.   All it will do is drain your energy and wallet and leave you with little.

You have to be skeptical and try to think for yourself.  If you find yourself buying a car because a friend has a the same or similar model, ask yourself if you are doing this to impress them (or because they impress you) or because it really is the make and model of car that best fits your lifestyle.

Listen to opposing viewpoints.  You learn more from your mistakes than from your successes - if you chose to learn, and not just label your mistakes as successes.  I've seen groups of like-minded people sit around and congratulate each other for their poor financial acumen - leasing cars, getting home equity loans, etc.  No one in the group bothers to say, "Gee, maybe having no debt is better than constantly taking on more and more" - because no one in the group wants to hear that.

Or take the poor soul who loses his job, drops out of school, is divorced from his wife, or whatever, and instead of admitting failure and learning from it, says that the job sucked, the school was no good, and his wife was a "bitch".

WE ALL DO THIS - and admitting to it is the first step.  And to some extent, we cannot ever be truly free from this sort of "hidden persuasion" in our lives.  We all seek out normative cues as I have written about before.  We all want to know that what we are doing is right and rational.  So we look externally to see what the rest of the herd is doing.  And if they are all wearing funny hats, we don one, too.

But somewhere, someone was the first to put on the funny hat - perhaps by accident, perhaps by design.  The rest of us just follow the fashion without question.

Thinking for yourself - truly having an original thought which is not merely an agglomeration of others ideas or a mere repetition of what you have heard from others, is probably the most difficult thing you can achieve in your lifetime.  And for many of us, perhaps impossible.  The great majority of unwashed masses will go to their graves merely barfing up what the Glenn Beck said, and professing their loyalty to their favorite brands of soap and religion, and thinking that life is merely a matter of selecting items from a menu, as at their favorite chain restaurant.

Avoiding that fate takes work.  Unplugging from the TeeVee and the media is a first step.  This means watching no Television and not constantly being on news websites or Facebook or whatever.  Getting all of your information from one source is problematic, as oftentimes that source is biased.  Even the Internet today is suspect, as Google searches tend to push you to things you already searched on.  For example, I type "end of the world 2011" in Google to get the image above, and as a result, Google pushes me to evangelical churches in subsequent searches.  The folks at Google think I have had a religious conversion.

Getting information from a panoply of sources is often the best way.  And this could be anything from a book (not a latest bestseller than "everyone is reading) an article, or even an old technical service manual.  It could be from a movie (not the "latest blockbuster" that everyone is watching and buying the t-shirt and video game of) or an old television show (downloaded from Netflix, not watched with onerous commercials) to whatever.

But the best source of information is probably your own direct experience - something that each of us has, and something that is hard to spoof, if you perceive reality directly and accurately (and not as a mere menu-selector).

Direct experience is the most instructive and illustrates the folly of us all.  When I see a fellow who drives an 8 mpg SUV to work complain about the price of gas, I realize that he is getting his normative cues from the Television and has dampened down his direct experience response to the point where reality is whatever the folks at Fox News tells him it is.  He has a right to drive a small house to work, and it is Obama's fault that gas is $4 a gallon.  The idea of driving less or driving a smaller vehicle are seen not only as unreasonable, but downright un-American.

Reality can be skewed this way, but not for long.  The smart thing to do, of course, if you want to avoid being a victim of periodic oil speculation and other price variations, is to not set up your life so it depends on fossil fuels so much.  You can drive less and live more.  But that takes a form of thinking that is not validated by the Television and all of your neighbors.