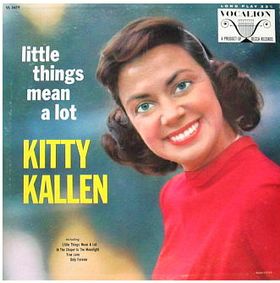 This is a very disturbing picture of Kitty Kallen.
Blow me a kiss from across the room
Say I look nice when I'm not
Touch my hair as you pass my chair
Little things mean a lot
Give me your arm as we cross the street
Call me at six on the dot
A line a day when you're far away
Little things mean a lot
Don't have to buy me diamonds or pearls
Champagne, sables, and such
I never cared much for diamonds and pearls
'cause honestly, honey, they just cost money
Give me a hand when I've lost the way
Give me your shoulder to cry on
Whether the day is bright or gray
Give me your heart to rely on
Send me the warmth of a secret smile
To show me you haven't forgot
For now and forever, that's always and ever
Honey, little things mean a lot
A lot of people in this country make good money - we are a wealthy country, despite what the naysayers say.  And there are a lot of people who make over $100,000 a year that are living "paycheck to paycheck" - even U.S. Congressmen.
Why is this?  Because they spend more than they make.  And where are they spending?  All over the place.  It is tempting to look for "the one thing" than bankrupts people - folks like to tag complex problems with simple answers.  But the reality is, most of us get into financial trouble through the "death of 1,000 cuts."  There is no pumping severed femoral artery bleeding us out in a matter of minutes.  Rather, we slowly bleed to death, over time, due to small expenses, which seem trivial at the time, but collectively, add up to a LOT of expenses.
Little things do mean a lot - and they add up, too!  One problem with personal finances, or business finances, for that matter, is that the little expenses often add up to a lot of money over time - and dwarf such "big ticket" items as car payments and mortgage payments.
And yet, while most of us will hem and haw and research and dither about buying a car or buying a house, most of us spend the bulk of our money on trivial things, that, taken alone, seem small, but taken together, represent the bulk of our budget.
Weak thinkers will say "Well, it's only a few dollars, it doesn't matter!"   And weak thinkers often criticize people who try to save money as being "cheap" and "stingy" for "cutting back on penny-ante things."
In business and in the government, it is the same way.  As I noted before, I had a friend who told me to "cut out the waste" in my business to make more money.  But try as I might, there was no pie slice on quickbooks labeled "waste" - just hundreds, if not thousands, of little expenses.
Similarly, our government budget is made up of  a lot of pie slices as well - each with its own constituency.  You could easily cut 10% from each pie slice, but finding the "waste" in the Pentagon budget, the fraud in welfare, and the excess in earmarks, is, well, time consuming and hard to do.
As I noted in my rowboat analogy, these little holes in your rowboat may seem like normal leakage.  But if you make enough of them, your boat turns into a soup strainer, and sinks out of sight, rapidly.
So, no, a $5 coffee drink at Starbucks isn't going to bankrupt you right away.  Nor is a $69 a month gym membership.  Or $100 a month for Cable TeeVee.  Or $125 a month for your cell phone plan with texting.   But taken together, all of these expenses add up - and add up quickly, to the point where you are spending hundreds, if not thousands of dollars a month on "little things" like buying lunch every day at work.
And weak thinkers will laugh and criticize people who bag their lunch or try to save money.  Why is this?  Because they want to validate their own spending habits as "normal" and thus financially sound.  When someone says, "You know, $5 is a lot for a cup of coffee, I'll just get a free cup in the break room" - that frightens the listener.  Because it calls into question their value system.
Let's take a typical salary slave working on a cubicle in downtown Anytown, USA.  Every month, they pay a lot of "little" expenses, that add up to a lot:

Of course, the list goes on and on.   You can throw in clothes shopping in the mall, going out to dinner with friends, paying cover charges to be seen at the trendy clubs, the list goes on and on, particularly for young people, who don't think very hard about money, are more concerned about status than wealth, and are very concerned about how they are perceived by their peers.
Each one of these things is priced at an attractive "below $20" pricing, which is the level that the human being does not cogitate as costing anything.  "It's just a few bucks!" they say, "Stop being so cheap and miserly!"
But taken together, these 14 items alone add up to nearly a cool $1000 a month - which is not chump change.  That's $12,000 a year, which is a lot.
Oh, yea, you "make good money" - I forgot.  But as I illustrated in my Disposable Income posting, for every $100,000 you make, you may really only have about $10,000 in "disposable income" to spend.
So, if you are spending $12,000 a year like this, and have only $10,000 a year in disposable income, chances are, you have credit card debt - which increases every year.  And like those extra pounds you put on, it doesn't seem so bad, until one year you wake up, and you realize you are over 30, overweight, and heavily in debt.  How did we get here?
$20 at a time - that's how.
My suggestion is this:  Before taking on any NEW expense in your life, think about what other expense in your life you can get rid of.  Your income and expenses HAVE to balance out - and that is after you fund your 401(k) and savings.
As a young man, I never thought much about these things - working out a budget, deciding what to spend on.  That would be hard to do!  So instead, like most Americans, I spent until the checks bounced  - or my balance was zero.  And that is an undisciplined way to manage your money.
If you are not funding your 401(k) to the maximum amount allowed under the tax code, you should not be squandering money on things like this.  If you are in debt, you should not be squandering money on things like this.  Get your priorities straight - Pay YOURSELF before you spend money paying others.
People who don't buy these sorts of "small items" on the basis that they "can't afford them" are not being cheap, they are being realistic.  And it is weak thinkers who say "stop being so stingy!"
It takes years and years of experience to realize that you don't have to buy everything in the Mall.  And even if you did, it would not make you happy.  And oftentimes the best item on the menu is not the most expensive item on the menu - and in fact, this is usually the case.
You can do very much in life and do it on a budget.  In fact, if you budget properly, you can do more because you'll have more money to spend on different things.
On the other hand, being a spendthrift ends up meaning you will do less over the long run.  You will end up paying, over time, more and more of your income in interest payments, to pay off debt for things you bought years ago - things long ago discarded or meals long ago digested.  Does that make any real sense?
Of course not.
Yes, you have to be careful with money, and that is not being "mean" or "stingy" but being smart.  And over time, you will accumulate wealth and you will be happier and healthier than the person who just "has to have it all now" and finances everything over time.
But, alas, the majority of people fail to realize that for much of their lives - in fact, most of us never lean this.  We spend and spend and spend and have a good time, and when it all goes horribly wrong, we get depressed and blame the government.
That is an alternate reality I do not subscribe to.  Sorry.
Newer Post Older Post Home