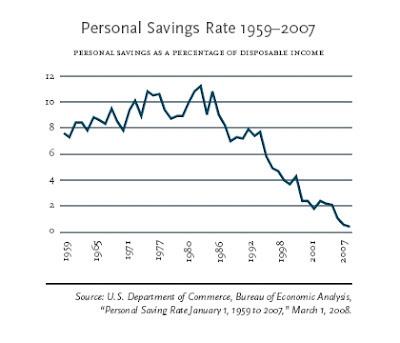 Consumer overconfidence lead to the drop in savings and increase in consumption of the last two decades.

The idiot media loves to report on the Consumer Confidence Index, as if it were some sign as to the strength of the economy.  And this, of course, is partly what is wrong with our economy.  It is based all on consuming and not on producing or saving.  We are told that buying crap is a patriotic duty, as it "creates jobs".  But in reality, wealth cannot be created merely by consuming - you have to produce as well.  An economy based on consumption is little more than an economy based on a Casino.  In fact, it is worse, if the consumption is based overwhelmingly on imports and we produce less for export.

But on a personal level, the consumer confidence scheme of the last two decades has devastated many a person's personal finances.  During the 1990's and 2000's, when stock market portfolios went up, up, up, and then housing prices went up, up, up, many middle-class Americans found themselves in the odd position of being "rich on paper".  This meant that they owned a lot of investments and had staggering amounts of equity in their homes, but in real terms, were cash-poor, as they were spending a lot, charging a lot, and accumulating debt.

But most of us didn't worry too much about these things.  Why fret over $20,000 of intractable credit card debt when your house just increased by that much in value in the last six months?  On paper, anyway, many of us were millionaires, and things like mortgage debt, credit card debt, car loans, lease payments, and bills, bills, bills, seemed trivial at the time.

So during the 1990's and 2000's, the savings rate of this country plummeted and actually went negative.  Negative, as in borrowing more than we were making.  And this drop in savings mirrors the drop in the economy.

While we were spending, mostly on Chinese-made goods, the Chinese were saving - both personally and nationally.  On a personal, corporate, and national level, the Chinese have the highest savings rates in the world.  They accumulate wealth, we dissipate it.    And this is not just something that is done at national level, but a personal one as well.  So blame the government all you want, but check the balance on your own savings account first - chances are, you are part of the problem, too.

And the Chinese government buys our debt, and is our largest creditor.  So all that money they save, they use to invest in us.  They win the battle without firing a shot, and Sun Tzu would be proud of them.

But is all lost?  Do we all need to start learning to speak Chinese?  Well, that probably wouldn't hurt, actually, if you want a secure job these days - Americans are notoriously mono-lingual, and as our markets become more international, jobs will always exist for someone who can translate, and job opportunities will always be greater for someone who is bi-lingual (A recent posting for an Engineering job online noted "some proficiency in Chinese is helpful").

But there is good news.  A lot of us took the recession as a wake-up call to turn around our personal finances.  I know I did.  It was when I started this blog.  I cut back on spending dramatically and started saving more.  And I cut back on debt entirely.  And nationwide, this is an overall trend.  People are borrowing less, saving more, and spending less.

Now, of course, lower spending is not good for the economy.  But people have not cut back on consumption entirely, just cut back to reasonable levels.  And lower spending and more bargain hunting (valuing money more) means that prices are not going up as much as retailers and manufacturers would like.  The old days of just slapping a price on things and expecting people to pay it are long gone.

But more saving means more money available for investment.  And if you are running a company, now is a good time to sell stock or raise capital.  People are investing and interest rates are low.  With more investment in industry comes more growth and efficiency.  If you have money to invest in better machinery and consumers are demanding low prices, you can offer better products at lower prices and thrive.  In a market where interest rates are high and consumers are willing to pay any price, efficiency is not valued as much.

Long-term, I think this means a much stronger and more rational market, despite what the naysayers are saying.

Consumer saving has rebounded sine 2008, to record levels not seen since the early 1990s.
Today, investors are once again worried, as the economic news isn't booming like they'd like to see.  And it won't be booming for some time.  But a positive increase in productivity, sales, profits, employment, and savings are not bad things - just because they aren't as great as you'd like them to be.

It will take a long time to turn around the economy, given the damage done over the last two decades.  But it will turn around, eventually.  That much is certain.  The U.S. of A. is not holding a "going out of business" sale after nearly 250 years  in operation.

Consumer confidence will gradually increase.  But I think after the spanking we all had in 2009, few of us will engage in the kind of mindless exuberance that characterized the last two decades.  Our older population will be saving more and spending less.  But this is a good thing, in my opinion.