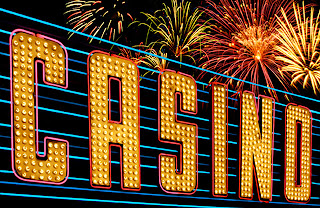 The Casino mentality pervades our society today.   Even our government believes in the Casino mentality.  But at best, all a Casino - or any form of gambling - does is rearrange money from one person to another.  Little or no real wealth is created.


The creation of wealth.  How does it occur?  Usually, wealth is created when someone takes a raw material and turns it into something of higher value, usually with the addition of labor.  Wealth can even be created from ideas - which really are instructions on how to create value from lesser materials.

And most businesses are all about creating wealth this way - as well as in calculated risk-taking.  We, as a society, reward those who take risks - that pay off - and punish those who avoid risk or who take on risks whose positive outcomes fail to materialize.

The Casino, on the other hand, is just raw risk-taking for no social good.  You go there and risk your money, and little is achieved, other than a few hours of amusement.  And the risk-taking factors (odds) are stacked so that no matter what, the odds are you won't win.  There is no way (or very little way) to go to a Casino and perceive a low-risk transaction that others are avoiding and be rewarded by a win.

On the other hand, take the example of the farmer.  A farmer takes dirt and seeds (along with a host of chemicals) and creates a crop.  From lowly materials (dirt, seeds, chemicals) he produces a marketable good, whose market value is far higher than the source materials.  We reward him for his labor, as well as his risk-taking.

You see, if we paid farmers based on labor rates alone (as they do in Communist countries) most would be making minimum wage - after all, much of farm labor is unskilled.  But we are not merely paying farmers to drive tractors and combines, but to take a risk - the risk that the weather will be good, there will be rain, and that the market price for their crop will be high.  And farmers can make a lot of money some years, and lose some in others.

And in our economy, we even sell off this risk - in the form of commodities trading - by trading on the future price of corn, beans, or pork bellies - such that a farmer can ameliorate risk by selling off the future crop for a fixed price, and let some other person assume the risk of price fluctuation.

In that instance, the risk-taking is performing some social good, by stabilizing prices (in most cases) and allowing the farmer an assured income (provided the crop does well).

Or take the example of a manufacturer.  In a factory, they take raw materials - steel sheet - and stamp it into car bodies.  A few thousand dollars of raw materials goes in one end of the factory and tens of thousands of dollars of automobile comes out the other.  Again, there is risk to assume as well.  A poorly designed or poorly styled car may flop in the marketplace, or consumer tastes may change (as happened to GM).  We reward the manufacturer not only for the value added, but for the risk-taking involved.

And if the reward is high enough, others get into the business to get at a slice of that reward, which in turn, lowers prices for consumers, and another social good is performed.

Now granted, these are idealized scenarios, and I am sure some Commie Hippie Scumbag (I am redundant here, thrice) will argue that the farmer is raping the land with his chemicals and the factory is polluting the air.  That is missing the point here, and illustrates how some people can miss the big picture.

The point is, a Casino does little, if anything, in terms of creating wealth.  No raw materials are used to make something better, no risk is assumed that furthers a social good.  In fact, a Casino not only fails to create wealth, it creates poverty in its place.

And people who like Casinos and gambling in general are succumbing to poverty-think.

In the town of Auburn, New York, a factory once stood, owned by Bombardier Canada, which refurbished old New York City subway cars.  The factory took a raw material (worn-out subway cars) and by adding labor and know-how and raw materials, turned out the clean, neat, and largely graffiti-free subway cars you see in Manhattan today.

But once they re-habbed the last car, the factory closed.  What to put in its place?  Well, manufacturers were not chomping at the bit to locate in New York State - where they would be treated little better than criminals and taxed out of existence - and only after the local Union went on strike for a decade or more.

So the Mayor of Auburn hit on an idea - let's build a Casino!  We'll give the land to the Indians, who can then claim it is part of their reservation, and then a Casino can be built where a prosperous factory once was.  It would be a "clean industry" in a town that has had to struggle with PCB cleanup issues.

Fortunately, the idea never came to fruition. But it is sad that they would think that gambling would save the City.

By the way, the "gaming industry" attracts a lot of people with names distinctly not native-American, even if they are on an Indian reservations - which to me, is another reason simply not to go.  Buying drugs or gambling is just putting money into the pockets of odious, violent, and corrupt people whose interests are anti-societal and diametrically opposed to yours.  You buy drugs, you are culpable for the decapitations in Mexico.  You go to a Casino, you are liable for the mob hits in New Jersey.  Want to reduce crime?  Stop giving money to criminals - it is as simple as that.

And of course, the whole plan was sold on Jobs, Jobs, Jobs, which we all know, as obedient little Socialists, are created only by Government Action and not by the private sector.  But of course, some annoying naysayers tried to point out that the few construction jobs would last only months, and likely go to contractors from Pennsylvania, who would then leave the area once the job was done.  The remaining jobs of waitress and croupier would be fairly low-paying jobs, and not create any real long-term wealth for the area.

And of course, others, like me, might point out that the amount of gambling that people can do is pretty finite.  Most people don't gamble.  Some may try it once in a while as a lark.  The hard-core compulsive-addictive type can't help themselves - and that is the core of any Casino's customer base.  And once they run out of money, as many did in the last recession, they stop coming as well, out of necessity rather than choice.

So the idea that "If you build it, they will come" is a bit flawed, as the more gambling outlets that open, the less business each will do.  And today, we have gambling nearly everywhere.  There is a gambling boat not 10 minutes from my house - 8 trips a week.  And I can buy lottery tickets in nearly every State.  Like I said, even our government is jumping on the "something-for-nothing" bandwagon, looking at lotteries as a "fun way" to tax people, albeit on a voluntary basis, at least.

But the key is, if you go to a Casino, you don't create wealth in any real sense.  If you win, which is improbable, you are merely taking money from a loser.  And if you lose, you get nothing in return, and your money goes to pay a winner - and for the Casino overhead.  Money is not being created, just rearranged.

Yes, there are a very few games where you can try to out-psyche your opponent - such as poker.  But online poker games illustrate that being there in person is not always necessary to win such games.  And of course, there are legions of people who claim they can win big at poker (online or otherwise).  But in many cases, these folks are either shills (faked-up poker blogs) or just deluding themselves and not counting their losses, which are many.

But even for the winners, no real wealth is being created.  When you give your money to a car dealer, you at least get a car in return, and the car company makes a profit, turning iron ore into a car.  But when you give your dollars to a Casino, it is far more likely you will get nothing in return, except perhaps at the all-you-can-eat buffet.

Yes a restaurant creates wealth, on a limited basis.  A kitchen, like a farm or a factory, takes raw materials (potatoes and meat) and turns them into a value-added entree, by adding labor and know-how.  So yes, a restaurant in a Casino creates some wealth.  But that accounts for a small fraction of the overall money changing hands.

Some new economists would argue that entertainment itself is a form of wealth creation, and I guess I would have to go along with that.  A movie studio takes raw materials (sets, actors, scripts) and creates something of greater value - a feature film that can be exhibited for money.   And yes, they take huge risks that their project won't be a bomb (and like the Casino, their odds are long!).

Similarly, one might make the argument that sitting in front of a machine with flashing lights and putting in your life's savings is an exciting form of entertainment - and that the Casino is "adding value" to its raw materials of machines, building, neon signs, and scantily-clad waitresses, by selling a gambling service.

And I will leave it to these new-age economists to argue that one out.  Because from my perspective, it isn't much of a value-added.  For most people, the entertainment value of a Casino is pretty nil.  And as I noted, their core constituency is the compulsive gambler, not the occasional guest.

So even assuming we give the benefit of the doubt to the Casino, and argue that they are creating "entertainment wealth", I would argue that the amount of increased wealth, and the resultant benefit to society are pretty nil.  It is not like they are growing corn or building cars or computers - things than can be used to create even more wealth.

When a politician suggests opening a Casino as a means of "creating jobs" and creating wealth, maybe it is time to investigate who is running against him in the next election.  Because gambling does not create wealth, but merely rearranges it, often causing great misery in the process.  It is not an answer to anything, and any politician who suggests it is lying to you.
Newer Post Older Post Home