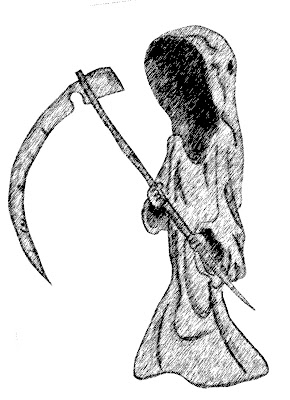 While death and taxes may be inevitable, debt is not inevitable, and taxes can at least be minimized.  When you take on debt, you may be increasing your tax rate.  Let me explain...

As I noted in a previous posting, during your working career, your incentive is to make as much as possible.   But when you retire, the incentive is to make less - to avoid paying taxes.  So if you take out less money from your 401(k), you pay less in taxes, and received a greater benefit to yourself over time.  If you can stay within the 15% tax bracket, you end up getting more bang from your buck than if you take out more and end up in the higher brackets, such as the 25% bracket and above.

And at the present time the 15% bracket limit works out to $34,500 individually, and $69,000 married, filing jointly.  Most middle-class people can live fairly comfortably at those limits, as the median income in this country is about $50,000.

The problem is debt.  If you retire with a debt load, such as a mortgage, then you will likely have to take out more money than the numbers outlined above, just to make your mortgage payments and live a comfortable lifestyle - if you are a typical middle-class or upper-middle-class person living in America.

So, if you retire with a $2000-a-month mortgage payment, that might mean you need an additional $24,000 a year in income to live on.  And that means spending your 401(k) money faster and taking it out at a higher rate.

And that higher rate might push you into the 25% tax bracket, which means every dollar you take out to pay that debt costs $1.25, instead of merely $1.15 if you kept to the lower bracket.

Yes, you might be able to deduct the interest on your taxes.  But if you are near the tail end of a mortgage, this may mean little in the way of interest deduction, and in fact, a standard deduction may be higher.  And of course, other debts (credit cards, car loans, etc.) are not deductible at all.

Optimizing the payback from your 401(k) and Social Security dictates that you stay in the lower brackets, if at all possible.  The jump between the 15% bracket and 25% bracket is the most pronounced (thank George Bush for that, with his upper-class tax cuts).

For the average middle-class person, I think staying in the 15% bracket in retirement is a sound goal.  It also provides you with a nice spending limit goal as well.

But the interesting thing is that the cost of debt is not just in the interest and principle you have to pay back, but also in the excess taxes you may have to pay if you are paying off debts in your retirement years.

And yes, this effect works for working people as well.  Joe decides to put $500 a month into a car payment.  In the 25% bracket, it means he pays $625 of his hard-earned cash to do so.  But Steven decides to put that $500 into an IRA instead - which means he pays no taxes on that money.  Spending more, instead of saving, can mean paying more taxes, both in retirement and while you are working.