The Problem with GPS systems..... 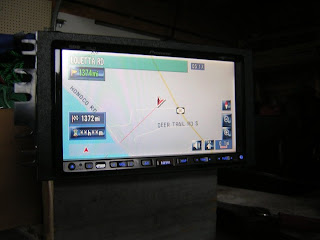 A GPS unit, such as this Pioneer AVIC Z2 unit that I recently installed in my BMW (replacing a factory system) can be outdated fairly quickly.  If you don't understand how GPS technology works, you can end up more lost than before!

Here on the island, it is funny to watch tourists with their GPS systems.  The lady at the gatehouse tries to provide directions, but the blowhard Dads (are there any other kind?) say "Nevermind!  I've got a GPS SYSTEM!" and they roar off, only to get lost within 10 minutes.

The problem is threefold.  First, many of the roads on the island were moved or closed off more than 10 years ago, and as our island is a little-traveled area, the map database people didn't bother to update their maps.  So people go tearing down Riverview Drive, not realizing that part of it is now the driveway to the club, and a dead-end, with low hanging oaks to tear the roof off their camper.  The GPS says it goes through!  And GPS systems are never wrong, right?  Technically unsophisticated people rely too heavily on technology.

Second, our island is being overhauled, with new buildings going up and new roads being built, and old ones torn up or re-aligned.  Your GPS says the road goes straight ahead, but there ain't no road there anymore!  So most of the map database for the island is pretty worthless.  But of course, there are basically two roads on the island, so why did you need GPS again?

Third, people have a paranoid Fear of getting lost, even on our little 7-mile long island where all the roads basically loop around, eventually.  There is no dead-end road clogged with rusted cars with skeletons behind the wheel - tourists who got hopelessly lost and were never heard of again.  But fear is a strong emotion - and a useless one.

And people fear the most minor of inconveniences.   So they do U-turns in the middle of the road, convinced they are "on the wrong road" and "out in the country somewhere" because they haven't seen a stoplight or a Burger King.  We have neither on the island,  thankfully.  If they just kept driving, they'd get to where they are going.

But they don't.  They spin around, try to follow the GPS, which shows them driving across an unimproved swamp, and they curse and say "what is this crazy place?  It doesn't exist on the GPS!"

Well, try looking out the window, instead....

Preventing frustration with GPS requires that you know how the system works.

GPS systems use global positioning satellites to determine your position - usually within a few yards, for most modern systems.  Map software stored in the unit then takes that position and tries to put you on a corresponding nearby road in the map database.  Sometimes the position can be off, particularly if the system can only shoot a couple of satellites.  So sometimes, particularly with parallel roads, it may put you on a service road, when you are on a nearby highway.

So, right off the bat, these systems can be problematic, as within a few years, they are obsolete and outdated.

For cars with built-in systems, this is particularly problematic.  My 2002 BMW X5 came with a CD-ROM based system, that required a dozen discs to cover the USA.  When you changed States, this often meant pulling over to change discs.  And since CD-ROMs are slow, it also meant that the system would lag behind the vehicle if you were traveling fast through a complex area.

Newer systems use DVD-ROMS, which are somewhat of an improvement in that you need not change discs, but nevertheless can be slow.

My old system started losing pixels, and moreover the map database was obsolete.  New discs are like $250 if you can find them (or have someone burn a bootleg set for you).  A used Pioneer AVIC Z-2 was $480 on eBay with 2008 maps - stored in an internal hard drive that is also updatable.

And therein lies a big problem with built-in GPS systems in cars - the car will still soldier on for a decade after the built-in GPS system is obsolete.  A friend of mine just bought a 2004 Mercedes with 56,000 miles on it.  It is far from being worn out, but the CD-ROM GPS system is pretty obsolete by today's standards - just a few years after it was built!

Add-on dashboard GPS systems like the Tom-Tom, Garmin, or the like are one answer.  These are a lot cheaper than built-in units, and you can take them from car to car.  And unlike built-in units, they won't linger on your dashboard as a testament to obsolete technology, years from now.

Dash-top units will become obsolete, too.  But they are cheap to replace over time.  On the other hand, they also are more easily damaged in transit and are at risk for being stolen.

GPS systems are great.  And when they work as advertised, they work great.  We were driving through Harrisonburg, PA last year and had a hankering for Indian food.  The Pioneer had a feature to find nearby restaurants, even sorting them by food type.  In no time, we had exact directions to one of the best Indian meals we had had in a long time.  Beats pulling off the Interstate and eating at a Gas Station Subway!

But other times, they don't work so great.  And you should expect that, and know when to turn them off, look out the window and look at your map - or ask for directions, instead of just assuming your technology will know-it-all.