The Millionaire Next Door 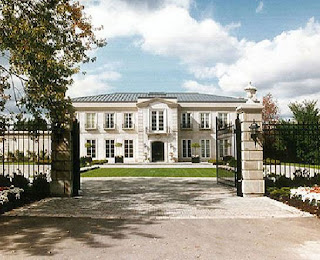 Most people think that Millionaires live in a house like Jed Clampett.  Most people are wrong.


There is an interesting book called The Millionaire Next Door, which talks about who are the average millionaires in the US of A.  What is surprising about the book is that most Millionaires are not like what the stereotype suggests - people in top hats and tails, swimming in their money vaults like Scrooge McDuck.

Rather, a lot of very average people end up as Millionaires.  Today, it is not hard to do, as a million dollars is not a lot of money - or not as much as it used to be.  The average American home is worth a quarter-million dollars, and in many suburban neighborhoods, the "Leave it to Beaver" home of the 1950's is a half-million, easily.

But oddly enough, the typical Millionaire makes little money and lives a fairly modest life.  The folks who make $250,000 a year and live in a $750,000 home in McLean, Virginia are less likely to be Millionaires than the guy running a chain of self-service car washes in West Virginia.  Go Figure.

According to the book, the median total annual income of Millionaires is $131,000  - an astoundingly small amount, when you think about it.  Having a high income (high cash flow) and a high net worth are not necessarily related.  And in fact, for middle-class people, I would suggest there is an inverse relationship.  The typical "big salary" man of the big city spends as much as he makes, and has no real wealth.  A guy with his own business, who makes far less, tends to save more, as he is not certain that a paycheck will be there tomorrow.  The millionaire, on average,  has an income less than 7 percent of their wealth.  They are worth a lot, but don't make a lot.

The median net worth of a millionaire household has a net worth of $1.6 million.   As you might imagine, this means there are a LOT of people with a net worth just over a million dollars, and a very few people with mega-millions or billions of dollars.  The millionaire class in this country is fairly large - but mostly upper-middle-class, not "wealthy" in the traditional sense.  And of course, as inflation devalues the dollar over time, the standard of Millionaire will drop accordingly (so in a way, it is a skewed statistic, as we are arbitrarily defining the class as anyone with a net worth over a million dollars.  If we chose $500,000, not surprisingly, most members of the class would be in the $500,000 to $1,000,000 range).

It is an interesting book, as it illustrates that the secret to success in this country is not to be found in spending, but in saving.  Living up to your salary level only insures that your net worth stays low, even if your earning power is high.  But if you can live at a level below your salary level, you can accumulate wealth and become rich.

For most people in the middle class, this is simply a matter of choosing to do so.  Few choose to do so.

And the more a person makes, often the less they chose to do so:

"You may ask: How can someone be considered wealthy if, for example, he is worth only $460,000? After all, he's not a millionaire. Charles Bobbins is a forty-one-year-old fireman. His wife is a secretary. They have a combined annual income of $55,000. According to our research findings, Mr. Bobbins should have a net worth of approximately $225,500. But he is worth much more than others in his income/age category. Mr. and Mrs. Bobbins have been able to accumulate an above-average amount of net worth. Thus, they apparently know how to live on a fireman's and secretary's income and still save and invest a good bit. They likely have a low-consumption lifestyle. And given this lifestyle, Mr. Bobbins could sustain himself and his family for ten years without working. Within their income and age categories, the Bobbinses are wealthy.

The Bobbinses are quite different from John J. Ashton, M.D., age fifty-six, who has an annual income of approximately $560,000. How much is Dr. Ashton worth? Is he wealthy? According to one definition, he is, since his net worth is $1.1 million. But he is not wealthy according to our other definition. Given his age and income, he should be worth more than $3 million.  With his high-consumption lifestyle, how long do you think Dr. Ashton could sustain himself and his family if he were no longer employed? Perhaps for two, at most three, years."

That should give one pause.  How can you have a net worth of only 1.1 Million dollars while making over a half-million dollars a year?  All it would take to save up a few million would be to live on "only" $100,000 a year and put the rest into savings.  But many of us - most of us - when we start making money, think we should "reward" ourselves with a big house and leased cars.  And this chews up the money in short order.

Personally, I would prefer to save more and then retire early, than to work like a dog (as most Doctors are forced to do these days) to make a lot of dough and then have nothing to show for it.

It is all a matter of choices.  We expect the poor to make poor financial choices - that is what makes them poor in the first place.  But when educated people - middle-class and upper-middle-class people squander their wealth, it gives one pause.