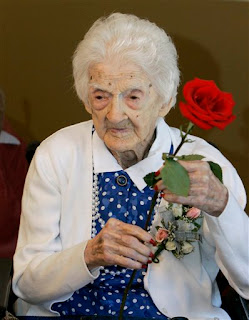 Older people are often victims of economic crimes and petty rip-offs, if not just bad bargains and bad advice.  We shake our heads when granny gets snookered for a few bucks - or her entire estate - and they say to ourselves,  "well, I'm glad that will never happen to me! "   But what happens when YOU become elderly in a world that will be confusing and complex and hard for you to understand?  Being proactive in preventing other people from being ripped off is to act in your own self-interest.
As I noted in earlier posts, many folks have the attitude that anyone dumb enough to be snookered by a payday loan or other rip-off is really just a victim of their own folly.  And to a large extent, there is truth in that proposition.  You can't protect people from themselves, if they really want to drive their car off a cliff.
But on the other hand, if we allow our society to devolve into a dog-eat-dog anarchy of unrestrained capitalism, it ends up having a corrosive effect on society as a whole.  The end result of such financial anarchy can be found in places like Latin America and the Middle East - where even people of modest means live in walled compounds surrounded by concertina wire, to keep out the great masses of poor and desperate.
Do you really want to live like that?  I know I certainly don't.  But increasingly, our country is devolving into gated communities of the well-off, many of whom make their living running chains of check cashing stores or the like - and living in desperate fear of their own customers.
But beyond that, there is a more immediate effect to you, in the long-term.  The elderly are constantly targeted for financial abuse, by both criminals as well as respectable institutions like banks and financial advisers. We call granny a fool for investing all her money in an overpriced annuity, and say to ourselves "Thank God that will never happen to us!"
But the reality is, if we live long enough, we may end up becoming senile and confused.  And at that point in our lives, who will be there to say, "Excuse me, Mr. Financial Adviser, but you can't prey on the elderly!"
You see, living in a dog-eat-dog world is fine and all, when you are a young pit-bull.  But it sucks when you are a cat.  Or if you become an aged pit-bull, doddering around waiting for some aggressive young dog to rip your throat out.
Cons, scams, rip-offs, and even just plain bad bargains, all come back to haunt us, even if we are not the direct victim of these.  Every person who gets scammed and conned - and told by the law that there is "nothing that can be done" because the scammer is above the law or the law doesn't have the resources to go after them - that person becomes bitter and disillusioned with life and more importantly, our country.  That is a person who won't be there to defend our country when it is threatened.  That is a person who will say "screw the future, where's my hot meal?  Where's MY payoff?"
And that is a dangerous thing, as empires and countries do not fall from external forces, such as the Visigoths or the Taliban, but from internal decay and rot - when people no longer think their country is worth defending, they open the gates and let the invaders in.
And if our country is a haven for con-men and ripoff artists, and our citizens are viewed as just lambs to the slaughter, can you blame people for giving up?
I am not saying this has happened just yet - but it could over time, if they think that the entire system is stacked against them.
And long before that happens, you may become old. And in the year 2040 or 2050, we will live in a weird different world than today.  Who knows what life will be like then - only a few decades from now?  Think about it - 30-40 years ago, the personal computer and the Internet didn't exist.  Now imagine you were born in 1910 or 1920 and are trying to comprehend the changes of just the last few years - or the technology.
It will happen to you too - and to me.  And one thing that concerns me is if I become old and befuddled (and no snarky comments, please!) that I, too, will be vulnerable to being ripped off.  That my life savings will be lost when I trust some "nice young man" at the investment firm, or I fall for some sort of scam or con, because I am too old and hazy to understand what is going on.  And then I will be too ashamed to say anything because of fear of being labeled senile.
The elderly deserve better than that, and YOU deserve better than that - because, God willing, someday you may be elderly and vulnerable.  But in America, there are all sorts of scams that target the elderly, and in most cases, the people perpetrating these scams hide behind the law or the police are too busy and too underfunded to go after these complex economic crimes.
And all too often, most of us remain silent, convinced that the victims of these crimes are culpable and to blame, not the criminals.
Newer Post Older Post Home