The Future of RVing? 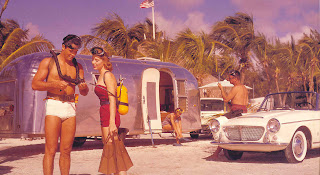 The RV industry has done a good job over the ages of selling the fantasy of the RV lifestyle - as if you could just drive down to Florida, park your Airstream on the beach and rent a little Fiat to drive around.  But the hash reality is something different today - high costs and unattractive places to stay.  With a glut of vacation rentals on the market, does RVing make any sense any more?


UPDATE:  Read this article (in .pdf format) by a journalist who covered the RV business.  He became disillusioned after he actually bought an RV and realized how poorly they are put together and how the financing can bankrupt many owners.   He gives the industry 20 years, tops, before a massive reshuffling occurs.  Maybe a bit dramatic, but who knows?
* * *

We just returned from a four-day vacation in Florida.  We left the RV at home and rented an old cottage on the beach.  It was $250 a night, which for two couples, was pretty reasonably priced ($125 per couple).  Of course, that is the nightly rate.  If we chose to stay a week or a month, the rates would be much, much less.

Was this cheaper than RVing?  Perhaps.  Even with our small $8000 trailer, which we pay $88 a month to store, there are costs involved.  We would have easily spent more in gasoline to tow the trailer (15 mpg versus 22 mpg) perhaps spending $20 to $50 more in fuel.  And then there is the amortized cost of the unit, its registration, repair and maintenance, and storage costs.  If you figure this out in terms of number of days used, even at two months a year (which would be a lot for many RV'ers still working) it might work out to $50 a day or more.

And then there are the RV park costs.  Even a basic State Park can run $25 a night, and some "RV Resorts" can run $50 to $75 a night.  If you add this all up, even for our tiny 17-foot travel trailer (the cheapest way to RV) the costs approach that of just renting a vacation cottage.

If we had an expensive motorhome or large travel trailer or 5th wheel, the costs of RVing would likely have exceeded the cost of renting the beach cottage.

And the relative experiences are quite different.  The cottage was charming and located right on the ocean.  Ocean breezes blew away the bugs and made for a cool, pleasant stay.  The house was roomy and had a huge wraparound porch, and lots of privacy to boot.

An RV park, however, would not have been on the ocean - or likely would not have been (most cannot afford the taxes anymore and many were sold off in the land boom to make way for condos).  And even if it was, we would have been parked, chock-a-block next to another RV, sitting in the shade of our awning and looking at someone's tires.  In terms of quality, it is not on the same level.

RVing makes sense only if it is a cheaper alternative to renting a home.  And that was the original idea behind it.  You towed a little trailer to a place and set up camp for cheap - and enjoyed beautiful vistas and the great outdoors.  It was cheaper and sometimes better than renting a camp or vacation home.

But today, particularly on the East Coast, the idea that you can just pull up to the beach and set up camp is a fantasy - and a fantasy sold by the RV industry.  Few places remain on the beach anymore, and those few that remain are very highly priced.  It is far more likely that you will be parked in a campground next to the Interstate Off-Ramp, lulled to sleep by the sound of the cars on the highway, as opposed to the roar of the ocean.

With the recent recession, a lot of RV makers went belly up.  Smaller players like Bluebird went bankrupt (no doubt aided by a fiasco in axle weight calculations on their latest models that forced a recall).  The mighty Fleetwood Enterprises has reorganized as a motor-coach maker, shedding most of its former glory.  Monaco is now owned by Navistar.  Other companies are hanging on and hoping to tough it out.  Dealers are pushing more modest coaches and trailers, and gas mileage is being touted once again.

The high price of gas is giving many pause as to the cost-effectiveness of RVing.  Many Canadians drag enormous campers up and down I-95 every year, right by my house.  They take them to Florida to camp, usually in an inexpensive campground near the off-ramp, and then in the summer, head back North.  The cost of dragging a 35-foot 5th wheel or driving a 40-foot motor coach can cost in the thousands of dollars - just in fuel.

Some folks just leave the camper in Florida and then drive or fly back.  But by doing so, defeat one of the purposes of RVing - to be able to travel and see the world.  The RV just becomes a de-facto Condominium - one that depreciates, not appreciates, in value every year.  And with so many condos on the market today for cheap, one wonders why you'd pay $50,000 to $100,000 for an RV plus a $400 to $800 per month lot rent, when for the same price you can buy a condo that might actually increase in value over time- or at least hold its value - as well as be more relaxing to stay in.

We plan on taking two months off this summer to explore the maritime provinces of Canada - New Brunswick (which we have visited before), Nova Scotia, and even Labrador.  We will be dragging our little 17 foot camper up there, and it should be fun.  But we will also be keeping an eye out for rentals for future visits.

Because while we enjoy our RV and are (or were) enthusiastic RV'ers (Charter Life Members of the Good Sam Club, no less!) the economics of it all make less and less sense, even as we have gone to a cheaper and cheaper RV.  The idea of driving a small station wagon with a few totes and suitcases of possessions (and getting 40+ mpg) seems a lot more appealing than getting 15 mpg (which is good, for an RV) and dragging all that weight around.

And as we get older, the hassle of setting up camp, cooking on a small stove, sleeping in a small bed, showing in a tiny shower, seems less and less attractive.  And with the national demographics the way they are, this does not bode well for the RV industry.  While older retirees may constitute a lot of the RV'ers out there, as I have noted in other posts, there reaches a point, after age 70 or so, where it just becomes a lot of work, and infirmities and illnesses interrupt the best laid plans of the "full timer".  Read the classifieds in any RV magazine and see what I mean - "Illness forces sale..." are the three most commonly seen words in a listing.

And of course, there is the maintenance issue.  Quality in RV construction is the dirty little secret of the industry.  We toured an RV factory in Elkhart, Indiana, and it was interesting to see the teenagers with staple guns, slapping together these things.  After owning several and having to maintain them, I have to say, that most are shockingly poorly made.  Regularly, they need to be taken apart and re-assembled and fixed and tinkered with and rebuilt.  Engines often do not last long, nor do transmissions - being heavily over-burdened at one moment and then left idle for months at a time, which is the worst thing you can do to any piece of machinery.

And the upper-end coaches can be a nightmare to repair.  At the Wanderlodge factory, we saw firsthand, the assembly of a million-dollar coach, with the entire area between the frame rails being taken up with wiring looms and hydraulic hoses in a black bundled nightmare.  Woe be to the owner who has to trace the wiring on any of that!  For most folks, "do it yourself" repair is out of the question - you can't even change a flat tire on one of these monsters.  No thank you!

So long-term, what does this mean?  Well, for you the consumer, it means that today, more than ever, you should "do the math" on RVing as a lifestyle.  It may be far cheaper for the foreseeable future to rent a vacation home with all the amenities than it is to buy an RV and stay in an RV park, parked next to other vehicles.  And many sites, such as Vacation Rentals by Owner, for example, offer you the chance to rent directly from an owner, which saves both of you a lot of money.

For the industry, I am not sure we will see a "bounce back" in the near future.  Baby Boomers are hoarding cash for retirement - as they failed to save in the past.  A glut of cheap, used rigs still burdens the market.  Older RV'ers are selling off coaches as they reach their 70's and 80's unable to handle the hassle of driving big rigs and setting up camp.  Or their widows are selling them for pennies on the dollar when their husbands die.   High gas prices scare the pants off of people, who don't want to own a 5-8 mpg vehicle in an era where gasoline prices regularly spike and recede with regularity.

While the recent gas bubble has burst, $4 a gallon gas will be back before long.  And I am sure before I die, $10 a gallon or more ($20?) will be the norm.   Even factoring in inflation, this will be a severe increase in the price of fuel, I think.

So, while we like to look at all the pretty pictures of the Airstreams and Wanderlodges on the Internet, the reality of paying so much for an unnecessary expense, at a time in our life when we need to conserve cash, just doesn't make sense.  And then there is the problem of where to store it, as well as the maintenance on such an intermittently-used item.

On the other hand, for a few thousand dollars, I can rent a vacation cottage on a remote mountain lake for a week or even a month.  It is no contest as to which is the better deal.

Our plan is to keep the RV for a few more years.  But likely we will transition into vacation rentals in the future.  It will be cheaper, less work, and more enjoyment.  More time spend vacationing, and less time spent dicking around with sewer hose connections and the like.

And from a cost standpoint, it will be a break-even or perhaps cheaper than RVing.
Newer Post Older Post Home