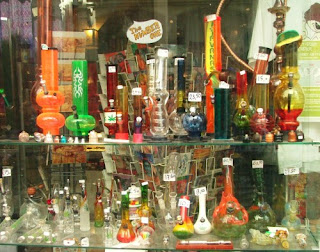 Chronic marijuana use, over time, can lead to serious emotional and mental health issues, as well as financial problems.  Paranoia and Agoraphobia are not uncommon, but the norm.  It is very sad.


One aspect of marijuana use not discussed much is what happens to people who never quit - people who smoke pot for the rest of their lives.  What happens is a form of mental illness sets in.  And it is not pretty, or pretty to be around.  And people who are "chronics" tend to end up as trouble-makers for themselves, their employers, and their friends.  If you know such a person, run, do not walk away, before you get drawn into one of their petty life dramas.

Patty, a suburban housewife, is falling down this slippery slope.  She and her husband smoked a lot of pot in their own circle of suburban pot-smokers.  To all outward appearances, they appear to be normal middle-class Americans, he an executive for public broadcasting (big surprise there) and she a stay-at-home mom.  But behind closed doors, the bong comes out and they are also "swingers" as well.  All is not as it seems in Peyton Place!

To each, their own, as they say.  And your sex life and your personal life are your business - until they spill out into everyone else's.  And not surprisingly Patty Pot Smoker is always starting something in the neighborhood - getting involved in causes, writing angry letters to the editor, and the like.  But that is only when she leaves the house, which, as time progresses, is less and less.

Yes, mental illness is starting to rear its ugly head, and leaving the home, when stoned, seems "harsh" and difficult and staying home so comforting and cozy.  She has agoraphobia, first class.  And this is not uncommon among stoners.  If you are prone to this type of behavior (and we all are - sometimes I do not leave the house for days at a time!) then pot will enhance it.  The world seems like a frightening and scary place to the stoner.

We can only hope that hubby won't lose his six-figure salary job.  But you know stoners!  There will undoubtedly be some contretemps about some silly nonsense, and he could end up with his ass out the door, at age 55.  And where do they go from there?  Because, as you might guess, they haven't saved very much for retirement.  It all went up in smoke - and in take-out dinners and new cars.

His wife left him when the pot became too much.  Having a stoner husband or Dad is difficult, as they are not there when you need them, and often forget things like picking up the kids from after school.  You end up so stressed out over it, you realize that being a single Mom would actually be less work - one less child to take care of.

What should have been the greatest achievement in his life - his marriage and family - ended up as another in a long string of embarrassing failures.  But nothing is too great to sacrifice on the almighty altar of the gange.  Give up smoking pot to be a Dad?  Why bother?

Frank leaves the house less and less and suffers from chronic depression as well as borderline psychosis.  This is the "fun" part of being a pot smoker, after all.

Gerald moved back in with his parents - at age 50.  A lifelong pot smoker, whatever little ambition he started with in life has long since left him.  He does the minimum needed to get by, and that ain't a lot.  Gerald's problems would be his own if it didn't impact other people - or will impact others down the road.  But it is like the difference between being Eccentric versus Crazy - once you start annoying other people, you are no longer merely eccentric.

And in Gerald's case, not only is he annoying his parents, he will annoy us all when retirement age looms shortly.  Flat broke and with no employment history, he will have to rely on SSI to get by in retirement - taking far more out of the system than he ever paid it.  You and I will be asked to support Gerald's lifestyle, in effect.  He had a helluva party, to be sure.

To be sure the connection between mental illness and marijuana use is one of those cart-and-horse kind of things. Many young people, who suffer from depression or the incipient stages of schizophrenia, may "self-medicate" themselves with marijuana.  Correlation and Causation are two different animals.

But it goes without saying that if you are not in an altered state all the time, you are probably more likely to better manage your own personal affairs.  I harp on this time and again in this blog, but it is a basic truth.  If you are stoned, drunk, hallucinating, or crazy, chances are, your checkbook is pretty messed up.  If you can't think rationally, you can't act rationally, and all it takes to succeed in America is to act rationally in an irrational world.

So, people will rail at authorities, saying "that if only pot were legalized" (or whatever) their lives would be a perfect paradise.  Otherwise, why bother trying?  And this sort of thinking goes for non-pot smokers, too.  It's just that pot smokers do a lot more of it.

And if you are struggling with mental health issues, taking mood-altering substances isn't going to help.

In my own life, I have had the opportunity to witness, firsthand, the decline and fall of many a good person, due entirely to drug use. Marijuana makes long-term users paranoid, reclusive, low-performing, and constantly in crises with "authority figures".

And not only do they not succeed in life, they can barely maintain themselves.  Many work at crappy, dead-end jobs - if they work at all - for years at a stretch.  One day, they wake up and realize that most of life has passed them by, and they have nothing to show for it.  And more frightening, retirement is around the bend, and they have nothing saved for it.

And this is where pot smoking ceases to be funny, but becomes a big burden for the rest of us.

But once again, if you are stoned, or a stoner, and reading this, chances are, it won't make much of a difference.

And this is one reason why I think this Medical Marijuana thing is a good experiment to try.  Marijuana users will never believe that their problems don't stem from the illegalization of their drug.  If we allow some folks to smoke this crap legally, we can follow the results and see what happens.

And as I suspect, what you will see is that the typical marijuana user will still be broke, poor, living with is parents, and mentally ill.

And that was the reason I gave it up, 25 years ago.  It was not only not making me happy, but making me depressed.  As a depressant, you'd expect it to do that, of course.  But at the same time it "calms you down" it tends to provoke anxiety.  It is hard to function on pot, and hard to deal with stress when on pot, ironically.

Happiness has to be found internally.  And if you find yourself finding it in a bottle, a pill, or in a joint, chances are, you aren't really finding happiness, but an artificial crutch - a construct - which is masking your underlying pain and preventing you from dealing with your underlying issues.

Remove the crutch, and you may learn to walk again.  I know I did, although with a limp.
Newer Post Older Post Home