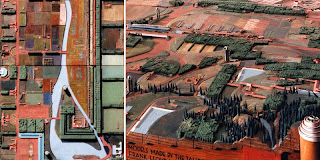 Frank Lloyd Wright's vision for the future was a spread-out Suburban Sprawl he called "Broadacre City."  Today, we are realizing his dream, the so-called 'Edge City' - but finding it to be a costly and unsatisfying dream. 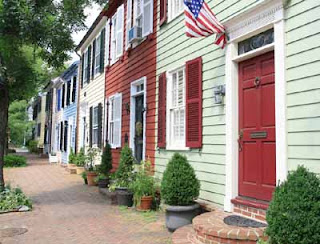 Before the turn of the last Century, people built houses that literally touched one another.  Being within walking distance of work and shopping was essential to efficient living in an era before automobiles.

How close together?  Back then, your house would likely touch the neighbor's house.  The photo above is from the City of Alexandria, Virginia, one of the oldest Cities in our country.  In an era where land was plentiful and people few, they laid out the city in small lots and people built right up to the edge of the property lines.  Why did they do this?  Population pressures were not that great, and land was relatively cheap.  Why live so close together and pay a premium for a "downtown lot"?

And the answer, of course, is transportation.  Most goods moved by horse and wagon - or by ship, barge, or boat.  If you were a businessman or a tradesman, you needed to be near your place of business and also near markets where you could buy and sell goods.  And this meant you had to be within walking distance.   Life was hard, the work was long, and no one had the time for an hour-long commute on foot every day.

The Trolley came to Alexandria and people started moving out along the trolley lines into "Suburban" neighborhoods around the turn of the last Century.  And across America this trend continued.  And the Automobile accelerated the trend toward Suburban Sprawl.

At first, however, many of these Suburban neighborhoods were relatively self-contained.  In our neighborhood of Hollin Hall, the developer built houses, but also built a shopping center, with a theater, grocery store, hardware store, drug store, doctor's offices, and the like.   And they left room for a local school, which the County built.  It was only the commute to work that required a car.  And the roads in the development connected to other roads in the area.  Very few streets were "dead ends" or "cul de sacs" as they are today.  If you wanted to go somewhere, there were five or six through routes you could take, depending on which direction you were going in.

Today, we have, through zoning, created new "edge cities" where every activity is marshaled into a separate district, and clogged and congested roadways connect them all.  People live in housing developments on half-acre lots.  The roads in the developments do not connect to anything, other than a grand entrance with a waterfall and gatehouse.  This, in turn, connects to a two- or four- lane road, which eventually leads to the Interstate.  To do anything at all, living in one of these developments, requires that you enter and exit through this one choke-point.

Work occurs in a similarly laid-out "Office Park" located in a district of office parks - often miles away.  To get there requires an hour of very frustrating driving - through many stop signs, stop lights, and congested roadways.  It is not pleasant driving at all.

Shopping is in a gaudy and distracting shopping district - usually on a divided two-lane highway lined with Lowe's, Home Depot, McDonald's and other chain stores, punctuated by the occasional shopping mall.  Like the scenery on The Flintstone's, it repeats after a while.  These areas are also annoying to drive in, as you go from stoplight to stoplight, barely covering any ground at all, usually at 35 mph nominally, but more like a 15 mph crawl, with the un-timed lights.

Schools are in yet another area, and often miles away.  Today, schools run enormous fleets of buses to haul students to and from a shorter and shorter school day - if the students do not drive themselves or are driven by their parents.  For many kids, the bus ride is almost equal to half the school day and may in fact exceed the amount of real classroom time.

Because of this type of "Architecture" people who live in these Godforsaken places have to spend an inordinate amount of their income on automobiles and gasoline.  And since these sort of places are designed around the car, the car is central to their lives.

If you live this lifestyle, chances are you are the type of person who leases one car after another or buys a new car frequently.  After all, you need "reliable transportation" - or at least that is the lie we all tell ourselves.  The real reason, of course, is that in a society where people drive everywhere, what you drive is a statement of who you are.

So what's wrong with "Edge City" - as we now call Mr. Wright's "Broadacre City" dream? (the same idea, but with uglier houses than he envisioned).  Several things:


1.  People get no exercise in their daily lives:  Driving everywhere - door to door - they walk hardly at all.  As a result, to "stay fit", many people actually drive to designated places where exercise is permitted - gyms and jogging and biking trails.  And people pay for the privilege of exercising, too.  How queer!

2.  The entire thing is predicated on cheap gas:  Unless we can come up with valid designs for an electric car, the Edge City Lifestyle will always require cheap gas to run.  When gas gets expensive, the lifestyle is not sustainable.  And people in the Edge City will not buy fuel-efficient cars.  After all, who you are is what you drive - and a gas-guzzling SUV is the image that most of these folks want to project.

3.  It squanders precious land and open space:  As the population of the Earth staggers upwardly, we are coming to another tipping point in our history - another potential food crises.  We have more and more mouths to feed, but in the last 50 years we have been plowing under more and more farmland to build Suburban Sprawl housing developments.  In some areas, in an attempt to halt sprawl, they mandated one house per five acres.  Developers responded by building on five acre lots - eating up farmland at an increased pace!

4.  Loss of Habitat:  This rapid consumption of land has also had a negative impact on the environment, both from a ecological and an aesthetic point of view.  Beautiful woodlands and wild areas are not at "Woodland Mews Townhomes," which is no longer a habitat for wild life.

5.  Pollution:  All those cars driving willy-nilly around in circles all day long has added to our pollution problem.  Because of this type of architecture, the average mileage driven in America has crept up from  10,000 miles a year in the 1960's to 15,000 miles a year today.

6.  Groundwater and Runoff:  Concrete and Asphalt roadways cause water to runoff instead of soak into the ground.  This means more fresh water going into storm drains, to be dumped into the nearest river or bay - which it turn decreases salinity of the bay, killing off the seafood that once fed the area.  So when you leave Woodland Mews Estates to go to "Jack's Seafood Shack",  you get served some seafood harvested from Thailand or Vietnam.

7.  Unsatisfying Lifestyle:  The Edge City looks perfect and clean and neat.  Everyone has a shiny new car, and the vast greenswards are mowed and trimmed by an army of quasi-illegal aliens and their leaf blowers.  On the surface, it all looks very perfect and clean and neat and, well, corporate.  But it isn't real and has a fake feel to it.  And living and working and shopping in such places has an unreal effect on the brain.  Nothing is on a human scale.  Instead of being self-actualizing, you become little more than a consumer, with your only real job in life being to choose from among a number of brands or products.  Unhappy, people trade in their cars and their spouses, seeking something newer, flashier and perhaps better.  They rarely find it.

So how do we unwind this horrible nightmare we designed?  In many ways, it may not be possible.  This type of architecture was very popular and the neatly done models and maps sold an entire generation of zoning officials that this was the new, modern, and futuristic way of doing things!

You, of course, as a person, could choose to do otherwise - to live a different kind of lifestyle - live in a different house, work in a different place, send your kids to a different school.  You do have choices - even if you think you do not.

And people who say "I have no choice - I have to stay here and make the mortgage payments on my end unit at Woodland Meadows Mews Estates Townhomes!" are missing the point.  Financial burdens that you take on willingly and create are not obligations for the rest of your life.  You have control - you need only realize it.

"But," you say, "I like the Edge City!  I love my new Acura!  And I love the neatly manicured  plantings surrounding the low-rise office building I work in!"

Yes, you may say that, but actions speak louder than words.  Near every "Edge City" in the country is the old city - or the old town.  The historic district where the homes are close together and where all the good restaurants are.  A place where the architecture is on a human scale and has a "real" feel to it.

And this is the place the Edge City residents go, when they want to have a good time.  Because they know that the strip malls and the chain restaurants of the Edge City aren't real, and aren't really very much fun, despite their advertising slogans and jingles.