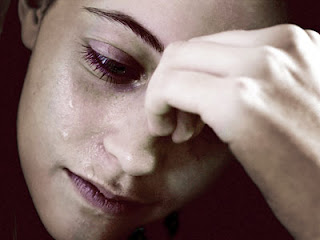 Why do people worry so much, even though they have little to worry about?  Is this part of the programming in our brains?
Worry.  It, well, worries people.  And people worry about the stupidest stuff.  Did I leave the iron on?  Maybe the stove?  Perhaps the house is on fire, even as we speak!  The brain, it seems, has an endless capacity for worry.

Or, let me amend that - perhaps the brain has a constant capacity for worry.  In other words, you get rid of one thing in your life to worry about, and your brain obsesses about something else.  It is like the amount of worry expands to fill the void, once you eliminate one worry.

People buy lottery tickets on the premise that they will "win big" and "never have to worry about money again!"  The reality is something different.  You win millions of dollars, and your money worries are just starting - the more money you have, the more you have to worry about!

We worry about paying our bills, saving for retirement, not going bankrupt, losing our jobs, getting into an accident, having an unexpected repair bill.  And we worry about our health.

And that is the ultimate worry that no one worries about enough - in this country.  We over-eat and over-drink and smoke and fail to exercise.  And yet, if asked, most folks would say their main worries were financial or political.  And yet the most likely "bad thing" to happen to them will involve an ambulance.

Living here on retirement island, I see that worry is never-ending.  People retire here, comfortably, and have enough money to live on.  Many have pensions, in addition to Social Security.  No worries, right?  And yet, many worry themselves to death.

And many of these worries seem silly to the rest of us.  People create worry to fill a void in their lives, and oftentimes, these sort of worries are trouble-makers.  In other words, people create trouble so they can worry about it.

The two main worries, of course, when you retire, are running out of money or losing your health.  And most people drown out those worries with more superficial worries - such as voting Suzie out of the Parcheesi club, or complaining about the government.

I've seen people who drink to excess, don't exercise at all, are easily 50 pounds overweight, and smoke.  What is their primary worry?  That Obamacare will bankrupt the country.  And yet, I see a massive coronary as an event far more likely to impact their lives in the near future.  And yet, that is something that they can actually DO something about - by losing weight, eating better, exercising, dieting, drinking less and cutting out cigarettes.

That is an extreme example, but it illustrates how we all sometimes obsess about things that are largely out of our control, while blithely ignoring those things more likely to affect us that we do have control over.

I was at the bank the other day and the bank manager was turning up the volume on the TeeVee in the bank (why do banks need TeeVees anyway?  If I was manger I'd toss that, first thing).  She was telling me that there was some compelling testimony in the "Tot Mom" case or some such bullshit.

She said "Have you been following this?" and I replied, "Well, no, I find those sort of things really don't impact my life very much, and I don't have the emotional energy to devote to such things."

She probably thought I was being rude, and she probably thought I was an idiot for not obsessing about the "Tot Mom" on trial.  But if you think about it, what is the point?  Unless you are on the jury, it really makes no difference.   And publicizing and making these tragedies into celebrity trials rarely results in justice being enhanced.  Remember the O.J. trial?  If there weren't cameras in the courtroom, O.J. Simpson would be on death row, today.

Worry is unavoidable.  And excessive worry can lead to depression.  When you worry about things that you have no control over and cannot change, your brain starts a downward spiral of depression and pent-up anger.  Figure out what you can worry about that you CAN change - your behavior, your eating habits, your spending, your work habits, your drinking, your smoking, your driving, etc.  Because chances are, by altering the habits you can control you can immensely improve your life.

Worry is annoying, to be sure.  But like any other emotion, if you can harness the energy and put it to good use, you can improve your overall lot in life.  Emotions, by themselves, are not to be trusted.  Over-analyzing them can also be a dead-end.  Take than energy and focus it where it can do some good.

And at the end of the day, you won't have much to worry about.
Newer Post Older Post Home