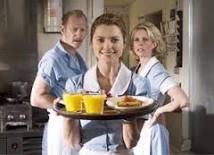 If the minimum wage is raised to $10 or $15 an hour, should this affect your tipping?  Maybe, maybe not.

A lot of ink has been spilled recently about raising the minimum wage.   People on the Left correctly note that working minimum-wage jobs sucks (and I can attest to that, personally) and that no one can "support a family of four" on a single job at minimum-wage.

Of course, "supporting a family of four" on a minimum-wage job is not written into the Constitution, is it?

On the Right, economists note that many minimum-wage jobs are entry-level positions taken by people who don't necessarily need the money.   High school students, college students, and retirees often work part-time at jobs that don't justify paying much in a way of a salary, simply because the economics of the business can't support the costs.   A small gift store, for example, can't afford to pay someone $15 an hour to sit behind the register all day long - but can afford $8 an hour.   And sitting behind a register all day long isn't exactly back-breaking work.

The other argument that economists make - and it is a legitimate one - is that if you raise the minimum wage up too high, then it will cause other wages to go up as well, and also raise the cost of goods and services, leading to inflation.    The poor will always be with us, and if you raise the salaries of the poor, it only means that money is worth less.   You can't legislate that everyone be wealthier - you can't make "every man a king."

Sadly, the points raised by economists are often missed by the Left, who accuse them of being heartless bastards who just want to stamp on the poor.   But what they are pointing out are logical fact-based arguments, and what the Left harps on are emotional arguments.

And let's face it, as plebes, we'd all like to vote ourselves a raise, right?   So when you tell Cletus you are going to increase his salary by 50%, he thinks it is a pretty swell deal.

But even Cletus can add up a column of numbers, and many folks, even if that can't add, understand that when someone promises something-for-nothing (particularly a politician) it usually ends up badly for the little guy.

An easy way to compare wages with annual salary is to double the number and add three digits.   There are 50 working weeks in a year of 40 hours each, giving a total of 2,000 hours.    So for someone making $15 an hour, that equates to an annual salary of $30,000 a year.

Thirty grand a year is a pretty good income.   Median household income in the USA is about $51,000 a year, so a couple making $30K each is making above the median salary.   And from personal experience, I can tell you that you can live very comfortably in the USA on that kind of money.

A lot of people today - even professionals, tradesmen, factory workers, and the like, are making salaries in this range.   And when you tell them that a waitress at a diner or a guy flipping burgers (or serving coffee drinks) is making more than they are (or just as much), well, they get a little pissed off.

And in a recent article, some claim that they will stop tipping if the minimum wage is raised.

Tipping is an interesting concept, and in the USA it is practiced in a different manner than in the rest of the world.   People in the US routinely tip 15%, 18%, and 20% or more, and think nothing of it.  In many other Western countries, tipping is either reduced, non-existent, or even not allowed.  In some countries, like Japan, a tip is treated as an insult.

But we have this crazy system in the USA, where part of the cost of overhead (labor) is at the discretion of the customer.   It is weird.

And the tax authorities and Department of Labor have factored in tipping into wages.  If you work at a job that involves tipping, you have to report your tip income.   A predetermined amount of tip income is presumed by the IRS.

And "minimum wage" depends on whether the job you have is a tipping job or not.   So the idea of $15-an-hour waitresses might be a bit overstated.   At present, the minimum cash wage for tipped employees can be as low as $2.13 an hour.

Yea, you read that right.  Two bucks an hour.

But this creates a bit of a conundrum for the consumer.   Do you tip the server or not?   How do you know how much they are making?   And in some sense, tipping is wholly unfair to waitstaff, as it is based on the cost of services, not on the labor involved.

For example, a waitress at a Diner might scramble to serve your eggs (sorry, bad pun) as well as that of a dozen other customers.   But since the average ticket is $10 or so, she makes maybe a buck or two on each customer.   And she is more likely to be paid that $2.13 wage than anyone else.

On the other hand, Jean Claude, the snooty waiter at "Chez Louis" has an average ticket of $100 and ignores your repeated requests for more water.   He gives lousy service, gets $10 to $20 per customer in tips, and likely makes more than the minimum wage.

It ain't a "fair" system, to begin with.

Compounding this is the fact that the consumer has no idea what the wage base is, without asking.   If you are at Seattle Sea-Tac airport, well you know from the news that people are making $15 an hour there.  Thirty grand a year ain't chump change, and it is likely one of the higher paying employers in the area.   Do you tip someone who is making more money than you?

It is an interesting question.   But since waitstaff don't advertise their wages, it is a hard one to answer.

Of course, one way around this conundrum is to eat out less, which is something I try to do more and more.   Expensive restaurants can be fun - and the food very good - but when you are spending $50 to $100 per person to eat, it is not something you can do in the long run.   On the other hand, at a diner, I feel guilty if my ticket is only $5, and I can't leave a tip of at least a dollar or two, particularly if the harried waitress had to hump to serve me.

It would be nice if our tipping system was more along the lines of our European friends - and less of a way of foisting off labor costs onto consumers.   But I don't think that system is going to change anytime soon.

Our crazy tipping system does have one advantage, sort of.   Since the cost of labor is a 15% "option" for the consumer, the proprietor of a restaurant can advertise lower prices for items.   For the very poor, this means that meals are more affordable, if they decide not to tip, or tip less.  This does keep restaurant meals affordable for the very poor - at the expense of the wait staff.  Hopefully, the wealthier clients make up the difference.  Hopefully.
Newer Post Older Post Home