That's the sound of history repeating....

It's a familiar story.   A European country defeated in war and nearly bankrupt, embraces a charismatic leader who fans the flames of nationalism, as well as prejudice, to accumulate power and bring back a feeling of national pride to its citizens.   They feel outnumbered and overwhelmed by their former opponents, and want to recapture the former glory of their empire.

And then one thing leads to another, and the "fearless leader" starts to annex neighboring territories.

Are we talking about Nazi Germany circa 1938?  Or Russia today?   The parallels are enormous.

Of course, today, it is unfashionable to persecute Jews.   Perhaps Gay is the new Jew.  History is perhaps not repeating, but merely echoing.

The reasoning given for invading the Crimea is an echo of the "logic" given by Hitler to invade Czechoslovakia.   He claimed that German citizens were being treated badly by the Czechs, and that Czechoslovakia (along with Austria and the Sudetenland) were "natural" parts of a "Greater Germany".

And today, just as back then, a world torn by depression and weary of war, didn't want to "start something" over some small Eastern European country, and tried to negotiate "Peace in our Time."

Only this time it's different.  This time both sides have nuclear weapons.

And of course, the Italians are out of it, this time around.   There is no charismatic leader running Italy - a macho-man womanizer who runs the country out of his back pocket.   Oh, wait, there was.   But Italians wised up in time.

Actually, the parallels between Russia and post WW-I Germany are many.   After World War I, we imposed what many argue was an unfair treaty of Versailles on Germany - a treaty that insured that their government would be weak and corrupt, and that their economy would suffer.  Under such circumstances, a charismatic leader would naturally emerge - one that would break the rules, violate treaties, and tell his people that that should have pride again, in their nation.

Of course, we did not impose such a treaty on Russia, but when the Soviet Union collapsed under its own weight, we didn't really do enough to prevent the new Russian government from devolving into an oligarchy of powerful and corrupt business interests - leaving the average Russian to suffer for years, until their economy could turn around (and to some extent, it never did).  Putin is popular in Russia as he is seen as eliminating some of the worst of the corrupt practices of the post-Cold War era.

And parallel goes further.  Putin has "cleaned house" so to speak, having former friends arrested for various alleged crimes just as Hitler turned on the Brownshirts.   And it goes without saying that political dissidents and protesters are routinely jailed for expressing their opinions.   If I was living in Russia right now, I'd be figuring on a way of getting out.   You remembered what happened to the Jews who stayed in Germany, thinking that "Mr. Hitler" was just all bluster, and eventually, the German people would "come around."   It didn't end well.

And of course, this time around, Japan has no interest in being part of an "Axis".   But perhaps North Korea?   Sort of fits the bill.

But all that being said, are we doing the right thing here?  How is this going to play out?  We are poking the Russian Bear with a stick.   And when you enter a cave, poking a bear, and the bear has no way out, it has no choice but to strike back.  An animal cornered is a dangerous animal, no matter how weak that animal may be.

Much of their former territories were stripped away, and from the Russian point of view, you could understand where they might feel as though they were being surrounded - as more and more of their neighbors aligned themselves with Western powers - NATO and the EU.  As more and more countries started to turn to the West - including countries right on Russia's doorstep, it was inevitable that some sort of confrontation would result.

Putin does have a point about the Ukraine, which, like most countries, contains people of more than one ethnicity, as well as disparate interests.  It is uncontested that the Eastern half of the Ukraine is mostly Russian and looks to Moscow.  The Western half, wants to align with the West.   And that right there is why the country has been in turmoil for the last few years.

But of course, invading isn't necessarily the correct response.   Recent history shows that there is a legal way of dividing a country in half.  Following a referendum in 2011, Sudan was divided into two countries, Sudan and South Sudan, and with the blessings of the world community, it peacefully divided into two separate entities (of course since then, there has been war between the two halves, as it turns out the oil is.... guess where?).

Putin engineered a "referendum" in the Crimea, but it was not recognized by the international community.   And strategically, he went about it all wrong.   The Crimea is not contiguous with Mother Russia, but an island of land surrounded by the remainder of the Ukraine.   Why not have a nation-wide referendum, and see which provinces want to stay with the Ukraine, and which want to join Russia - or form some new, independent Russian-leaning country?   It would have saved a lot of trouble.

Defusing this situation is essential to preserving the peace - and the world economy.  Sadly, leaders on both sides are presently in bluster mode - each trying to out-macho the other with strong talk.   Neither, it seems, wants to be perceived as "weak" by negotiating a UN-backed solution of the sort I have outlined above.

And that is the problem right there.   Not that the situation can't be worked out, but that the egos of the world leaders, and their public opinion polls are more important than doing what is right.  Obama, facing mid-term elections, doesn't want to be perceived as "weak."  Putin is backed into a corner and can't back down, as his popularity with the Russian people is at stake.

And guess what?  Putin ain't going anywhere.  The photo below is from the 30th G8 summit on Sea Island, Georgia, a stone's throw from my house.   Look carefully at the assembled "world leaders" in the picture - and think about which ones are still around.   The answer is, of course, none of them, except the glaring Russian in the background - the fellow with the 1000-yard stare. 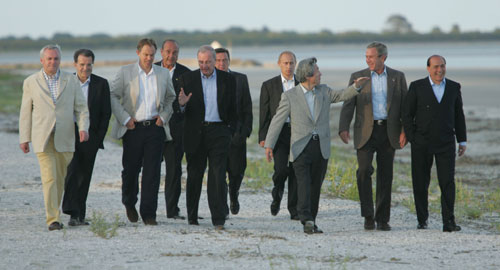