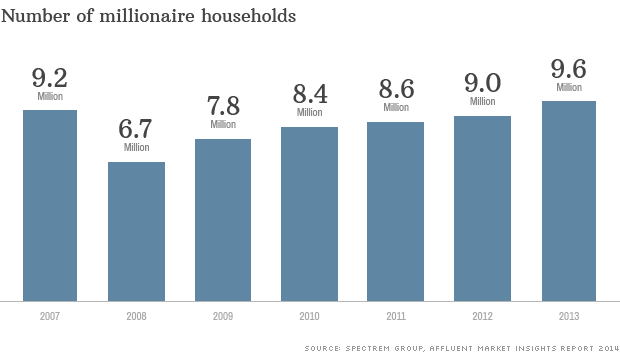 Being a Millionaire isn't what it used to be.  In fact, if you are a middle-class person in the USA today, by the time you retire, you will likely be a Millionaire.  We need a new standard to define what is rich in this country.  (Chart courtesy of the Bureau of Meaningless Statistics)

Another stupid story from CNN Money.   And stupid with a capital "S".   The graphic above originally listed the number of millionaires with a dollar sign, so there were "$9.6 Millionaires in this Country" according to the story.   By the time I captured the image, CNN realized its mistake and sent yet another of its graphic designers to its torture dungeons for re-education.

Being a Millionaire isn't what it was once cracked up to be, and many people today who are not counted as Millionaires are effective Millionaires because of the pensions they receive.

What do I mean by this? Well, as I noted in another posting, there is some dispute over what is a Millionaire exactly.   Most financial "experts" (read: old hacks) call anyone with a million dollars in investments other than their primary residence a Millionaire.

As I noted in that other post, this is utter nonsense, as it means that someone who has tons of debt could be called a Millionaire, whereas someone who actually paid off their mortgage isn't allowed into the club.

Chances are, if you are reading this, you will be (or are) too. Why do I say this?   Well, if you've read this far, you own a computer, have an education, and are solidly middle-class.   And anyone in the middle-class today can and will be a Millionaire, by the time they retire (or should be) or will be an effective Millionaire.

OK, Bob, so now you've added a third definition of Millionaire.   What does "effective Millionaire" mean?

Well, simply stated, if you receive a pension or other recurring benefit that totals $50,000 a year or more in retirement, you are effectively a Millionaire.

Why is this?   Well, because in order to create an equivalent amount of wealth in an IRA or 401(k) plan, using the 5% rule of withdrawal, you'd have to have a million bucks set aside, to live on for 25 years or so, in retirement.

This means that most schoolteachers and government employees, who receive pensions of $50,000 or more, are effective millionaires.    Or to put it another way, they are no richer or poorer than their neighbor who has a million bucks socked away in his Merrill Lynch account.

And no, the guy with a million dollars in his 401(k) can't just take it all out in a lump sum and spend it - as I noted in a recent posting.   Not without horrific tax consequences, anyway.  The pensioner and the 401(k) retiree have one thing in common - they get paid a regular amount over time

This also means most military retirees fall into this group as well.  If you join the military at age 20, and retire at age 40, you can receive a pension - immediately  (Sadly, those who served in Iraq or Afghanistan for a decade and then retire, receive nothing).  And while this amount may be lower than $50,000 a year, since it spreads over a far longer period of time (and with COLA increases, can be easily over $50,000 a year, by retirement), those who receive military retirement benefits - even lowly enlisted men - are effective millionaires as well.   Sadly, only 17% of those in the military receive retirement pensions, as a majority leave the service before that 20-year cutoff date.

(By the way, this is wholly unfair, as it incentivizes the military to discharge soldiers just shy of their 20-year service anniversary).

If you count the number of effective millionaires in this country the number is far more than "$9.6 million [sic]".

And this is a good thing, as if only 9.6 million people were millionaires in this country, only about 3% of us could afford to retire in any level of comfort.

In the coming years, you will see this 9.6 million number increase, and increase dramatically.  And no, this isn't because of "income disparity" or "the rich getting richer" or some other sort of bong-hit nonsense thinking.   It is simply because more and more of us are retiring on savings and fewer and fewer and fewer of us have defined benefit pensions.

Again, the IRA and 401(k) laws were passed in 1978, the year I graduated from High School.  So the "401(k) generation" (a better moniker than "baby boomer" or "millennial" as we actually have something in common) will be retiring (at age 65) in 2025, which is not that far off.  And many people retiring between now and then are retiring at least in part on their own savings, as their companies (or even the government) abolished defined-benefit pensions over the years.

So we are seeing a dramatic shift between a generation of pensioners and a generation of savers.  And no one seems to notice this seismic shift.   Today, you might think the situation in Crimea or a missing plane is what is "important" in the news.   But more important things (that happen slowly) are going on, and no one comments on them.   Well, except me.

To me, this is like watching an iceberg slowly move South.   It is a noticeable event, but happens so slowly that many folks ignore it - that is until the Titanic strikes it in the middle of the night.   Only then is it "news" and by then, it is too late.

And unfortunately, the Titanic event, which is slated to occur in the next decade, is the legions of retirees staggering toward retirement with nothing saved whatsoever.   We are heading off into the ocean of retirement, but only with enough lifeboats for less than half the passengers (and none of those are for the folks in steerage).

Sadly, the thing many people take away from the chart above is that "the rich are getting richer" and the "workers" are getting screwed, because they think "millionaires" are rich.   And this is in part because the term "millionaire" is really outdated and outmoded.   Due to inflation, we need to re-think this term and come up with a new one, to define what it really means to be "rich" in the USA.

When I was a kid in the 1960's, we watched "The Beverly Hillbillies" and were told that "Old Jeb's a Millionaire!" which we thought was impossibly rich.   But back then, gas was 35 cents a gallon, and Grandma's new Chevy was $2500, out the showroom door.  I still have the receipt.

Because back then, a hundred grand was enough to retire on, but not really a lot of money - at least not enough to consider you to be "rich".

The other problem with the term "Millionaire" in addition to inflation, is that it includes everyone from some middle-class schmuck who can now afford to retire, to people making a million dollars a year or more, and Billionaires like Warren Buffet.   It is a silly moniker, as it groups together disparate people - from the middle class to the very, very, VERY rich.

If you are reading this, and you are in your 20's, I can almost guarantee you will be a millionaire by the time you retire.   In fact, in 40 years, if you have only saved up a measly million dollars, chances are, your retirement will be pretty pathetic.   By then, if history is any indication, gas will be $35 a gallon (if we still burn it) and cars will cost $250,000 each (if we still drive them).   Inflation will make a million dollars not a lot of money.

So maybe we need to come up with a new definition for the wealthy.   And since prices seem to have gone up by a factor of ten over the last 50 years, maybe "Ten Millionaire" is a better term to use to define someone who is "rich".

So maybe "Ten-Millionaire" is a better term for today's economy.   And with inflation, maybe in another 50 years, we'd have to go to "Hundred-Millionaire" to define who is really rich.

But today?   Millionaire is just a name for the guy next door.
Newer Post Older Post Home