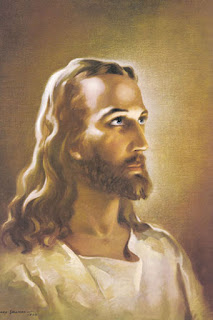 When in doubt, invoke the name of the savior....

I have been getting this SPAM e-mail for a few days now, and is interesting the angle they use to snare people.  Note that it arrived from one e-mail address yet asked me to respond to a second e-mail address. For a terminally ill lady, she knows her way around the Internet!

Dearest in the Lord.
Greetings in the name of our Lord Jesus Christ, I am Mrs. Elizabeth George an aging widow suffering from a long-time illness. I am writing this mail to you with heavy tears in my eyes and great sorrow in my heart because I am currently admitted in a private hospital, I have some funds I inherited from my late loving husband Mr. George, I will tell you more about myself and my plans with this money when I hear back from you. I shall be waiting for your response. Through my email: [redacted]
Best Regards
Mrs. Elizabeth George.

Mrs. Elizabeth George Period has an interesting angle - use Jesus.  There are a lot of so-called Christians out there who really have no clue what Christianity is all about, other than a brand-name faith they adhere to.   A man pledges his loyalty to Bud Lite, Chevy Pickups, Remington Shotguns, and Jesus Christ.  No Miller, Fords, or Muhammads for him!   And in their mind, Jesus is a pro-wrestling tough guy who is coming back any minute now with a machine gun, to gun down the people who pledged to the wrong brand of religion.  Because that's what Christianity is all about - being on the winning side.  Good thing they "picked" the "right" religion!
The other side of this twisted view of religion is that, in your personal life, if you are successful, it is because you have the favor of the Lord.  If you fail in life, you somehow incurred his wrath - or more likely, one of those heathen transgender gays incurred his wrath and he's taking it out on you.  Nothing, of course, is ever your fault.
So this SPAM e-mail, hitting the inboxes of the "faithful" doesn't appear sketchy.  Of course, some old sick lady wants to give you money!   It is a sign from God!  He chose YOU to receive this largess because you have been faithfully attending church posting Christian memes on Facebook and all that hard work is finally paying off!
Of course, when it all goes horribly wrong (which it will) the victim can blame those Godless Communists, Antifarts, or Lesbian feminists for the failure - and their loss of a few thousand dollars in "processing fees" or whatever the grift is.
But that's the point - if you want to grift people, use Jesus as a talisman.  It worked for Trump - one of the most Godless people on the planet, unless you consider him to be some sort of (ersatz) God, which many of his followers secretly do, and of course he himself thinks.
Just take any old grift and slap a Jesus on it.  Jesus wants you to buy this used car.  Jesus wants you to take out this payday loan.  Jesus wants you to vote Republican.
The possibilities are endless!
Newer Post Older Post Home
View mobile version