Christianity has taken a new turn - for the worse.

I was scrolling the Internet the other day and saw the term "Visible Christians" being tossed around.  The term struck me, as .I knew right away what they meant.  When I grew up in America in the 1960's, most people were Christian or Jewish, and very few were Muslims.  Granted, a lot of people who went to church or said they were Christian didn't take it very seriously.  And as time went on, they took it even less seriously.

You went to church as a means of socialization.  You didn't really believe that God created the world in seven days or that the world was only 5,000 years old.  No one believed that Noah was over 900 years old, and no one named their kid "Noah" either.  We viewed the Bible as stories - parables - with a point, but not to be taken literally.

At the same time people became more liberal in their religious views, many were becoming far more conservative - in fact, wacked-out.  The "Born Again" movement started in the 1970's as a bunch of hippies decided to get away from sex, drugs, and rock-n-roll and get into Jesus.  As one joke of the era went, "I used to be all fucked up on drugs.  Now I'm all fucked up on the Lord!"  And oddly enough, the glassy-eyed stare of the "Jesus Freak" wasn't much different than the glassy-eyed stare of the drug addict.

You see, there are a lot of clueless people out there, and they desperately want to latch onto some sort of movement - any movement.  When the whole "counterculture" thing took off in the 1960's, some people just jumped on that bandwagon - it was an attractive bandwagon, too, fueled with drugs and sex.  But many got burned out by it and switched sides when they got "love-bombed" by some proselytizing young people.  The "Jesus Freaks" weren't leaving the counter-culture to join the Catholic church or even a mainline protestant church, but weird new cult-like churches operating out of old storefronts and teaching bizarre beliefs.  The cult era had begun. 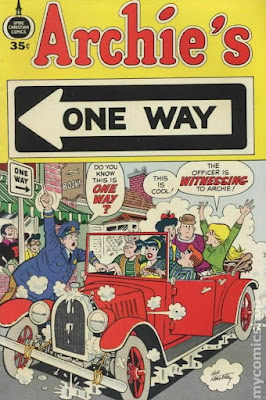 These comic books started to appear in the 1970's and as kids, we laughed at them.

Of course, these new cults were not limited to Christianity.  In fact, most were something else entirely - claiming provenance from far-eastern religions or even wacky new beliefs in space aliens or something along those lines.  After the Manson murders and the Jonestown suicides, cults became less popular, although many survived and thrived and some even became recognized (by the IRS at least) religions.

Jesus Freakism morphed into a more mainline Protestant religion and continues today.  "Born Again" became "Evangelical" and new "Mega-Churches" sprang up across the country by the 1990's.  It was a profitable venture!  This new form of Christianity had taken off and gone mainstream - and political.

Traditional evangelicals had eschewed politics in the past - citing passages from the Bible to the effect that politics and religion shouldn't mix.  In fact, some folks adhere to this principle today.  I recently met a couple who identified themselves as devout Christians, but were dismayed at the direction modern Christianity has taken.

At the same time these new forms of Christianity were expanding, traditional churches were declining.  Fewer people were going to services and, worse yet, fewer were donating money to their churches.  Many folks felt that their old church wasn't keeping in step with modern times and that the teachings were pointless, weak, and outdated.  These new evangelical mega-churches taught hellfire and brimstone, and also provided community services, such as day care, 12-step programs, coffee houses and outreach programs.   The mega-church was like Walmart - you could do all your shopping there.

Meanwhile, back in the Vatican, hard-liners were still arguing whether Mass could be said in anything but Latin - and that divorced people were persona non grata in the church.  The Catholic church, already rocked by one scandal after another, was doing its best to toss out what few members they had left.

By the way, this illustrates how indoctrination doesn't always work very well - or work for long.  People wring their hands at the prospect of a new generation of young people "indoctrinated" into radical Islam or fundamentalist Christianity.   Yet, the legions of lapsed Catholics who were raised in Parochial schools and forced to attend Mass weekly - if not daily - are testament to the notion that indoctrination doesn't always stick.  In fact, children tend to rebel against the values of their parents - something that should scare the crap out any born-again Christian who is home-schooling their children.

And yes, in addition to lapsed Catholics, I have met a number of people who were raised in fundamentalist households who have rejected their parents' belief systems and moved in an entirely opposite direction.  Funny thing, some of us have some semblance of free will.

But getting back to "Visible Christians" I knew right away what the author was talking about with this phrase.  While the "Jesus Fish" symbol goes back for centuries, it was not a prominent symbol in Christianity when I was a kid.  I think our church had it on the sign out front, but that was it.  Maybe a weather-vane on the steeple?

Suddenly, though, the Jesus Fish was everywhere - appearing as a decal or mylar-plated plastic logo on the trunk lid of every evangelical's car.  They appeared on business signs, business cards, and stationery.  It wasn't enough to be a Veterinarian, you had to be a Christian Veterinarian.  The Jesus Fish became a not-so-coded symbol, like "Let's Go Brandon!" among the far-right, so as to tell the "good" folks from the bad.  Sort of like the Star of David that Hitler made the Jews wear, but in reverse.  Lack of Fish was the new Star of David - or Pink Triangle.

To some extent, this is handy for me, as I have had some bad experiences with "evangelical" business-people.  Some believe that if they are successful in business, no matter how underhanded they are, that it is a sign that God favors them, so they keep doing bad things.  Others just let their subliminal prejudices give you shitty service or even horrific service.  We changed Vets mostly because the "Jesus Fish" Vet in town not only was openly hostile, but nearly killed our dog.

Back in the day, your religious beliefs were a private matter.  You didn't know if someone was Catholic or Protestant or Jewish, unless you were in the locker room.  People didn't wear their religion on their sleeve.  Today, they literally do - and they make a big stinking deal about it, too.

To me, this is a sign of weak faith.  The person who has to shout out all the time about how devout he is actually has serious doubts about his own faith.  He hopes to shout down these doubts and fears by creating a lot of noise - a distraction from the quiet disturbing questions that the circus of modern evangelical religion cannot silence.

The "Visible Christian" tries to view every thing in life through the prism of religion.  The problem with this model is that the Bible doesn't have all the answers to modern questions.  You do have to think for yourself, on occasion.

When I was studying Engineering, our professors told us that they could not teach us all the answers to Engineering problems, as we would encounter, in our careers, problems that had never been solved before. They could only teach us to think like Engineers, and thus teach us problem-solving methods we could use to attack new problems.

Funny thing, though, when I went to Law School, they said the same thing - the goal wasn't to give us pat answers to questions that had already been decided, but to teach us to think like Lawyers, so we could argue cases involving novel issues. And that is damn handy, as no one litigates settled issues - every case has some novel aspect.

Sadly, many today think that education is all about memorizing answers to known problems, and that if you memorize enough answers, that maybe someday someone will present you with that exact problem to "solve" even if it was solved years before.

Religion, I think, works the same way as an Engineering or Legal education.   It is not a set of pat answers to known problems, but a way of thinking about things and then applying that thinking to new problems.  Well, that's the way I think it should work, anyway.

The Bible, for example, is divided into two halves - Old Testament and New Testament. The New conflicts with the old, because, we are told, God sent his only son down to Earth to straighten things out because we were doing it all wrong.  The New Testament was Bible 2.0 - a software upgrade that overwrites the first version - correcting errors.  "An eye for an eye" is updated to "Turn the other cheek" - and the two "answers" are incompatible. You have to pick one.

Others see it a different way.  They go rooting through the old Testament looking for trouble and often finding it.  Everything in the Bible should be taken literally, even the story about a guy living in a fish.  There is no room for discussion or dissent.  And funny thing, the guy at the pulpit gets to decide which of two conflicting "answers" in the Bible is the correct one.

And I guess some people need that sort of certainty in life - that there are correct answers in the teacher's edition of the book, and no wiggle-room or uncertainty.  Because, let's face it, left without any sort of guidance, a lot of people go right off the rails, with no internal moral compass.

Worse yet, these folks want to impose their answers on the rest of us, even if their answers make no sense even for them.  They believe the Earth was created 5,000 years ago - ergo, that is what should be taught in school.  None of this fossil nonsense or evolution!  It's my way or the highway!  For some reason, even learning about different belief systems is, itself, a threat to them.

Some are calling these new movements, "Christofasicm" as it seems that not only are these new Christians embracing a superstitious Old-Testament-based version of Christianity, they want to force everyone else to follow it as well. "America is a Christian nation!" they cry, "In God We Trust!"  They claim the "Founding Fathers" (who, like the Old Testament, should be consulted for every aspect of modern life) were all fundamentalist Christians.  Never mind the fact that Thomas Jefferson cut up his Bible and pasted "the good parts" into his own Jeffersonian Bible.  I doubt the founding fathers would pass muster in today's evangelical world.  Poor Benjamin Franklin - they'd burn him at the stake!

The good news is, of course, that these "movements" seem to come and go, and according to some sources, at any given time, one-third of the members of an evangelical church are in the process of joining, one-third are regular attendees, and one-third have one foot out the door.  It may be, that ten or twenty years from now, the landscape is littered with the shells of foreclosed mega-churches, unable to service their mortgages as they run out of new members to fleece.

And this seems to be a distinct possibility, given the number of scandals that these mega-pastors seem prone to.  I know firsthand, some friends of mine (now deceased) who threw tens of thousands of dollars at an evangelical church - buying stained-glass windows and having their name emblazoned on a brass plaque at "their" pew.  When they ran out of money, pastor stopped returning their calls.

Nothing is certain except change.  Of course, that assumes we can survive the present.