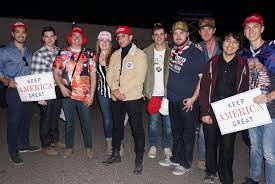 Racism, Misogyny and Nazism - what's not to like about the new College?

A friend of mine went off to college this fall, and came back already, disgusted.  She is of Asian descent and was accepted at a well-regarded, but rural college in the near-South.  When she got there, she was taunted and bullied by (literally) MAGA-hat wearing freshmen, who told her to "go back to China!"  The school did little or nothing in response.

She left after weeks of abuse, but what pushed her over the edge was her roommate - also 18 years old, was roofied at a fraternity party.

To the school's credit, they were appalled by the whole thing (but did they expel the miscreants?  Did they shut down the fraternity?  Of course not!).  They did, however, fully refund her tuition and dorm fees.  I guess that's something.

In a way, it worked out for her.  When I asked her what she was studying and why she was going to this particular college, she seemed uninterested in her own future.  Her parents had subscribed to a pre-paid in-State tuition program, and this was a school that accepted her (she didn't have stellar grades) and her major was "business" or something like that.   Better to cut to the chase early on and get your money back.

As a college dropout myself, I understand.  No point in spending four years getting a degree you don't need or want in a subject you have no interest in - and spending all that money.  Better off to find your path.  The human brain doesn't finish developing until age 25 - the age I sobered up, got serious about my future, and started my career.  So I am sure she will do well, despite a false start.  She already has plans for a work-study program, which is sort of what I did in life.

But what appalled me was the way she was treated in college.  Appalled, but not shocked.  I noted before that College has become High School 2.0, and we've infantilized an entire generation.  We raised the drinking age on the grounds that kids weren't mature enough to drink (yet could vote and die in wars).  So we act shocked that young adults act like big goofy kids, after we treat them like.. big goofy kids.

Again, I was lucky in that, at age 18, I was a salaried employee of General Motors.  It was a sobering experience and a dive into the deep end of the pool.  No one asked if I could swim or not.  Going back to a "regular" college later in life was quite a contrast.  I would leave work at 5:00 PM and drive to school for night classes, still wearing my lab coat with my United Technologies employee ID badge. My fellow classmates were talking about which frat party they were going to, and which chicks were "hot."  I was thinking about making mortgage payments on my house.  I was only 22 at the time, and maybe they were 19 or 20.  But we were worlds apart in terms of responsibility and attitude.

Not that I didn't still do a lot of harebrained 20-something bullshit.

But I think it has gotten worse since then.  Kids are graduating from High School knowing little or nothing,  As one person noted, we are putting so much emphasis on "STEM" education, we are graduating Engineers who can solve technical problems but have no clue why Nazism is a bad idea.

And some folks in this country think that's just swell!  How sad.  How did we get this way?