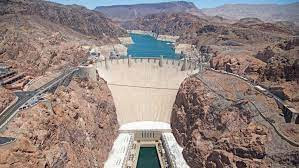 There are a lot of dams in America - and the world - are they good or evil?

I was recently at a campground and was extolling the virtues of camping at Army Corps of Engineers (ACOE) Parks.  When you are 62 or older, they can be as little as $11 a night!  I've even stayed in some for free.   And they are built right on the water (unlike many State Parks, which for some reason assume campers would rather be in the bug-infested woods and not have those pesky water views) because they are usually built next to dam sites.   For whatever reason, the Army Corps of Engineers was tasked with building a lot of our nation's dams.  And no, you don't have to have served in the Army to camp there!

My friend I was talking to replied, "Well, I am against dams, so I can't stay at one of those parks!"

There are close to 100,000 dams in America and they serve a number of purposes.  Some generate electricity. Others are strictly for flood control.  While others create water reservoirs and divert water to different communities.  Some, such as those on the upper Mississippi or the "Tenn-Tom" control water levels to create navigable waterways.  Some  create recreational lakes.  Some do more than one of these things.  And some are well made and well-built. while others are a little sketchy.  And they have effects on the environment, both positive and negative.   The bottom line is, of course, that most of them are here to stay, as we are dependent on dams to provide water for drinking and crops, as well as hydroelectric power for living.

Of course, the USA is not alone in dam building.  China recently built a huge dam and it has its own share of controversy - controversy which is not allowed within China itself.  Similarly, Ethiopia recently built a dam on the Nile river, which pissed-off Egypt, who has its own massive dam downstream.  My Dad worked on that latter dam (as a manager, not pouring concrete or anything) back in the 1950's before the Egyptians tossed us out and had Russia finish the dam.

Dams have always been controversial and also beneficial and also have negative side-effects.  One of the most famous floods in our history - the Johnstown Flood - was the result of a poorly built and poorly maintained dam, built on private property to create an artificial lake for rich folks to have regattas on.  When it burst, the poor folks in Johnstown, Pennsylvania were washed away, and as you might imagine, there were little or no consequences for the rich folks involved.

Most dams, however, are better built and maintained than that.  But damming a river does affect the health of a river.  Periodic flooding affects the wildlife and how the river flows.  Some dams periodically release water in large flows to simulate annual flooding to keep the river healthy, or at least try to.  And in the Pacific Northwest, "fish ladders" have been tried to let the salmon swim upstream to spawn - with mixed success.

Some folks - like my friend - argue that all dams are evil and should be torn down so as to "go back to nature" - but I think that ship has sailed.   Whether we like it or not, we have built an entire nation on dams, and to tear them all down would result in millions starving, without power or water.  All of Los Angeles would be uninhabitable desert without dams.  The central valley would not be the agricultural powerhouse that it is, without dams.

It is cute to say, "tear down 7 the dams" but you have to think about the millions - tens of millions, maybe hundreds of millions - of people who would suffer and die if such a thing were to occur.   And we can't simply replace all that hydro power with coal-fired plants - or natural gas-fired ones.

That is the problem, fundamentally - too many damn people.  And every form of power generation has some sort of disadvantage. Anything involving combustion pollutes -  even if it is "only" carbon dioxide.  Nuclear has its obvious problems - plus the staggering costs.  Solar is expensive and consumes acres of land.  Wind turbines are ugly and chop up the baby birdies.   There is no simple, clean, solution that doesn't have at least some drawbacks.

Funny thing, though, as I noted, the rest of the world doesn't seem to wring its hands so much about hydro power.  In Canada, they generate a ton of energy with hydro power and export a lot of it to the United States.  You want the lights on in New York City, you have to damn the river in Quebec.  So much of Canada is on hydro power that they call electricity "hydro" up there - which is confusing, as I thought they were referring to their water bills.

I used to do work for a Swedish company called "Vattenfall AB" which is Swedish for 'Waterfall."  Guess why.  Yes, they generate a lot of hydro power as well - although their later projects involved underwater powerlines across the Baltic to take advantage of cheap power from former Soviet states.

So you have to wonder why there is so much hate for dams in the United States.  At one time, we viewed things like the Hoover dam or the Bonneville dam as signs of progress and modernity.  Heck, Woody Guthrie wrote songs about how great the dams would be when they were done and how much power they would generate.  Of course, he was being paid by the Works Progress Administration to do so.  His son might have other opinions, today.

Of course, not all dams are great, or even good.  There are some that are unsafe, poorly maintained, or poorly designed.  Some flood control schemes (including levees, also an Army Corps product) end up protecting one community at the expense of another.  And fish and game might lose habitat as the result of damming a river (although such damming also creates lakes and wetlands for other fish and game).  It can be a mixed bag.

But I wonder, sometimes, where this "Dams are bad!" mentality comes from - and whether it is fueled by our opponents in the world.  And we do have opponents in the world.   Foreign agents have stirred up discontent in this country - as we do in other countries - and have gotten people to think our greatest accomplishments are defective, if not outright fakes.   We are told that our food is poison, our products shoddy, our government corrupt, and our technology destroying the environment.  And the people spreading these rumors are from countries that are poisoning the atmosphere and waters of their homelands, while their people starve.

But such is the nature of freedom.  Like I said, the big damn in China has its share of detractors - but none of them are in China.  Dissent is not allowed there.  China is also the biggest emitter of greenhouse gases, emitting more than all Western countries combined.  They don't talk about that much, either.  We don't because most Americans are not aware of it - convinced that all pollution comes from our country and others are innocents.  Most Americans believe the "Pacific Garbage Patch" is made up of old McDonald's wrappers and soda straws - and not fishing gear and garbage from Asian nations.

Freedom is a double-edged sword.  We are free to think and discuss, but also free to believe in things like Qanonsense and "Stop the Steal!" and so on and so forth.

This is not to say that every dam is safe or desirable or has no negative consequences.  Some argue, for example, that the dams on the upper Mississippi as well as the Tenn-Tom waterway, were an expensive boondoggle, as they created a navigable waterway that few people use.  The upper Mississippi hasn't gone dry just yet, but when we camped on both waterways, we saw little in the way of barge traffic - maybe one "tow" a day if that.

But to write off every dam as undesirable is sort of nonsense - particularly when they are not likely to go away anytime soon - if ever.  We are reliant on technology to keep the staggering population of the world alive, and it is long-past the time to go back to Amish living standards or "back to nature" as some would posit.  As I noted before, we are part of nature, including our technology.  So this idea that there is a "natural" world and an "artificial" one is, itself, flawed.

I think the point is, before you go off on some depressive negativity bandwagon that posits that the United States or the Western world is evil, corrupt, or bad, that you examine where this sort of stuff is coming from.  Because, chances are, a lot of it might be fanned by foreign sources and fueled by useful idiots.   We are not horrible people and our country isn't awful.

And not ever dam is damned.