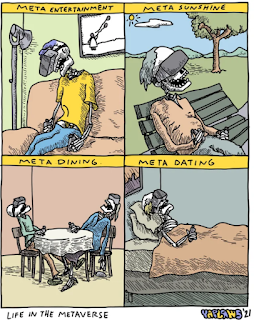 It seems there is a drumbeat of negativism about Facebook these days.  Is someone shorting the stock?

First of all, let's get this out of the way.  It's Facebook, not "Meta" no matter how much Zuckerberg wants it to be otherwise.  And "Alphabet?"  It's fucking Google.  Get over it.   You can re-brand all you want, we know where the real money is coming from. And in the case of "Meta" the only thing really making money for them is Facebook.

I hate Facebook.  It is the worst thing to ever happen to computers since AOL.  And I was very negative about the Facebook IPO.  After all, how much money can you make from advertisements for bogus nutritional supplements or sketchy credit-card refiancing deals?

Apparently a lot.  And what's more, both Facebook and Google have figured out how to skim a little bit from retailers, every time you click on a link to buy something.  And if you even talk about a product, it seems, your phone somehow figures this out and you get bombarded with ads for that very product.

It's enough to make one not want to consume at all.

But I was wrong about Facebook.  Well, not wrong about Facebook, but wrong about my fellow man.  That is the disheartening thing about it - you realize exactly how stupid your friends are and how stupid people are in general.  Today we are having serious discussions online about whether the world is flat, whether Nazism "wasn't all that bad" and whether slaves were happier back in the good old days.  And I am not kidding about this, either.

Sure, maybe it isn't a lot of people who think this way, but they are recruiting more and more, online, thanks to the likes of Facebook and Twitter and so on and so forth.  Facebook bears the largest burden of shame, though, as they really pioneered this "social media" thing and turned it unto an ugly thing.  I never recall "flat earth" discussions on MySpace - but maybe that was because it fizzled so quickly.

Not that I would let Google off the hook. Remember back in the day when their motto was "Don't be evil" - they were going up against the hegemony that was Microsoft.  Well, Google ditched that slogan, when they, well, became evil.  I guess it happens to any large corporation or near-monopoly.

I got off Facebook early on.  It just seemed there was something "off" about it and it kind of scared me.  Mark, to his credit, wanted nothing to do with it in the first place.  This is not to say he doesn't spend "screen time" on his phone, but he doesn't post messages on discussion groups - he just lurks.

But getting back to topic, it seems the media is rife with stories and Op-Ed pieces about how Meta sucks and how Facebook is "losing" members (the rate of growth has stalled, which I guess some folks call "losing").   Cartoons, such as the one above, mock the whole "Metaverse" concept.   Pundits argue that for $10 Billion and counting, Zuckerberg doesn't have much to show for it, other than a bad reboot of Second Life.

Maybe they're right, too.  What made Facebook work was the AOL effect.  People had computers but didn't know what to do with them, and navigating the Internet by URL was klunky and difficult.  How you find what to look at - and what to buy?  Facebook solved that problem for the novice computer users by providing a one-stop shopping location where your data was displayed, along with that of your friends, and of course, paid advertisers.  Of course, the problem with Facebook - and any social media - was that it was ridiculously easy to hijack the narrative by making things "go viral" or by attaching comments that skewed perceptions.  Pretty soon, your Uncle Harry was forwarding right-wing "Memes" to you on a regular basis.

Facebook succeeded, though because there was an installed base of hardware.  Everyone had a computer or a phone and an internet connection.  Today, most people can't envision living without one.  But Meta?   You have to buy a headset and they aren't cheap.  So in addition to your monthly cost for internet service, your $1500 cell phone and $150 a month cell phone bill, you PC or laptop (which might be required to run Meta) and your gaming console, you now have to shell out more money for a Meta headset.

Maybe it isn't a significant burden for some - after all, people spend that on cell phones and gaming consoles.  But a cell phone is a general-purpose device and you arguably "need" one to live in a developed country.  We provide them for free or at a reduced price in America, for the very poor.  Hell, even I have an "ACP" - Affordable Communications Program - hotspot.   Corporate America can't sell us crap if we aren't plugged in - right?

So maybe this skepticism of "Meta" is warranted.  Or maybe some clever Wall Street hack has decided to short massive amounts of  "Meta" stock and is feeding pundits and reporters with bad-news articles to be spread around.  Throw in a few hundred thousand posts from bot farms, all running down Meta, and well, the stock will tank.

I get suspicious when everyone chants like a Greek Chorus online.  Something is up!

Or maybe they are hoping "Meta" will spin-off Facebook as a separate entity (or vice-versa) to raise capital for the Metaverse.

Or maybe it is just a lot of Schadenfreude at work.  We love the high-fliers and successful business-people until we feel they are a little too successful.  Then we tear them down.   First Musk, then Bezos, now Zuckerberg.  Maybe we elevated them a little too high above ourselves.  Maybe they were always assholes.  Maybe having Billions of dollars changes you somehow.  I suspect all three at work.

So it seems that people are rooting for Zuckerberg to fail and hoping Facebook goes bust.  I doubt either will happen.  As I noted before, it seems that what Zuckerberg is trying to do is to be the gatekeeper of Virtual Reality - to create a platform for VR that is so ubiquitous that everyone will sign on to it.  It could be a gaming platform (and gamers have no trouble shelling out $1500 for a headset) or a business or technology platform (VR has been used for simulations, for remote control vehicles, and to see how parts fit together) or for "Augmented Reality" - which is something that Google tried to get into (Google Glass) and IBM had adverts for, going back decades.

It might not be as big as Facebook, but then again, Facebook was a lot cheaper to implement and the user base was a lot larger.  VR might not be for everyone - but maybe it wasn't intended to be, either.

This is not to say I am rooting for Zuckerberg or Meta.  I would not be a targeted user of VR, nor would I want to be.  But then again, you never know - maybe in the rest home, they will slap VR headsets on us, and we can explore the world while laying on a Barca-lounger.

Whatever the outcome, I suspect it will be a few more years and a few more tens of Billions of dollars before the "Metaverse" becomes a thing.  And if it does become a profitable thing, I doubt it will have the subscriber base that Facebook had.

But then again, I was wrong about Facebook, wasn't I?