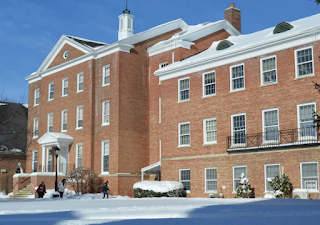 A reader sends me a link to an article about my old hometown - although after 40-some-odd years, it hardly feels like a hometown anymore, just a place I used to live.  I've spent more time away than there, and arguably have more roots in Northern Virginia than Central New York.

Anyway, a small college is going bust and it isn't hard to figure out why.  It was a small, liberal arts college, originally for women only.  Many of these small schools were founded many years ago, usually by Fathers who wanted a place for their daughters to get an education - in an era where women were not welcome (or safe) on mostly-male college campuses.  Not much has changed over the years, it seems.

So, for example, Wells College, founded by one of the founders of Wells-Fargo, was a small, liberal arts college in Aurora New York, near where our lake house was.  Like Cazenovia College, Wells College was on the brink of insolvency, but fortunately one of their alumni was the creator of "American Girl" dolls, which she sold to Mattel for nearly a Billion dollars - and she has supported Wells College with that largess.

The folks at Caz College need to go through their Alumni directory and look for Billionaires!

But it is an old story and one that will be replicated in the coming years - and one I predicted early on in this blog.  Like GM in the late 1970's, small colleges are selling an overpriced product that is, quite frankly, shoddy.  A degree in agitation studies from no-name U isn't going to set you up for a job.  And yes, education for education's sake is fine and all, but not when it costs $200,000 in borrowed money.

Yea, that. The tuition, room, and board at Cazenovia College was listed in the article as over $50K a year.  If you assume 1,000 students there (which they no longer have) that comes to $50 Million a year in income.  Surely this is enough to service a $25M debt, right?

The school realizes what is going on.  Demographics is the key - and what I mentioned in my first posting about college bankruptcies.   Fewer high school graduates are available as the next generation is smaller than the last.   And of those graduates, if they want to spend $50K a year on an education, they want an education that is relevant to today's needs, and from a "name brand" university.  You don't want to go to a job interview and the first question you get is, "Cazenovia College - where is that, exactly?  Is that like a Community College or something?  Do they have a football team?"

Yea, that's unfair.  But it is a realistic scenario - and you can't fight reality.   Recruiters and HR people look for name-brand colleges, often aware of them only because of the sports teams.  I cannot tell you how many job interviews I went to where, when I mentioned I went to S.U., they talked about Coach Boeheim for a half-hour.  Only the real tech geeks appreciated that I went to General Motors Institute - that landed me a job at Carrier.

The same is true with The George Washington University.  Yes, "The" is part of the title.  Actually it was "The National Law Center at The George Washington University" - try to fit that on a team jersey!  And when I went there, there were none.  Well, we had an intramural team, I think, but the new Dean made it a goal to create an NCAA Level 1 or whatever basketball team, and he did - using our law school tuition money to attract key talent.  So when I went on job interviews after graduation, it was "Hey, what about those Colonials!"  People are blithering idiots.

So we have a perfect storm - admissions are down and tuition is up, and liberal arts degrees from small colleges are a hard-sell.  Worse yet, is not every student is paying that $50K a year to go there.  When I was a teenager, we used to hang out  at the "Rathskeller" or whatever they called it - a small bar underneath the dining hall, as I recall, with pool tables, some pinball machines, a juke box, and of course, draft beer.

It was a different era back then - before the 21-year drinking age.  I was about 16 at the time, and we would hang out with the college girls and drink beer and play pool, and sometimes these girls would invite me back to their dorm rooms for a little nooky.   Yes, shocking, I know.  I was seduced by older women!  Pretty desperate women, I guess.

But all that being said, some of the girls I met were there on scholarships.  They weren't paying full-boat tuition or anything close to it.  And with all the partying we did, well, some of them dropped out before graduating.  It was the 1970's and a lot of pot was involved as well.

So although the sticker price is $50K a year, hardly anyone actually pays that. So their income is far less than what you would think.

Note that Cazenovia College was named "one of the best colleges" by U.S. News and World Report.  Still think those rankings mean shit?  I never did.

The people running the college are trying their best to make it work.  They started admitting men, as did Wells college.  And maybe they can turn things around, as Sweetbriar College (my late sister's Alma Mater) apparently is doing.  The new President of that college has radically restructured the curriculum.  Whether this works, long-term, remains to be seen.  It helped that the "Save Sweetbriar" alums kicked in $12M as part of the deal.

But like anything else, something has to give.  GM made shitty cars back in the 1970s, but they are still around today - after bankruptcy, of course.  Stripping away a lot of debt and restrictive labor contracts (as well as cutting costs and closing unprofitable divisions) was the key.  And I think colleges are no different.  Sure, they are academic institutions, but they are also businesses, and have to at least cover their costs, or go bust.  Even if run by the government, there has to be a lid on costs, lest the taxpayers revolt.

And maybe, like with Sweetbriar, the threat of extinction will get some alumni to open up their pocketbooks and cough up enough dough to keep the place running.   After all, $3M shouldn't be too hard to raise.  Heck, even $25M isn't all that difficult.