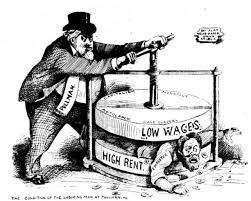 People say we should share the wealth.  But what is wealth, anyway, and is there really anything to share?

On the Internet, I hear statistics all the time that 10 people own 50% of the world's wealth or some such nonsense. I say nonsense because often these statistics count only equities such as stocks, so when they say "wealth" they are talking about stock portfolios and the illusion of market cap.

As Elon Musk's recent travails illustrate, (or that of Mark Zuckerberg) market cap is nonsense.  People said he was the "richest person in the world" based on the market cap of the shares he holds in Tesla and other companies.  But when Tesla stock tanked by a third, where did all the money go?  The answer is, it never went anywhere because it never existed - it was just market valuation based on what the last sucker paid in, for one share of Tesla, multiplied by the number of outstanding shares.

It is like the value of your house (which will be sinking soon, if not already).  A house is "worth" $500,000 in 2007 and in 2009 it is "worth" only $250,000.  Where did all the money go?  Answer: Nowhere because a house is not money.  The "money" never existed.  It was just an appraisal of value.  Until you sell the property and put cash in your pocket, it is just a theory.  So when you read about so-and-so being "worth" a billion dollars (Hello, Yeezy?) you have to be skeptical.  Chances are, their "net worth" is based on appraised values of real estate and stocks they own.  Real worth - in terms of cash, would be far less, if they cashed-out of their positions.

Regardless of valuations, some people argue that this "wealth" should be "redistributed" to the poor (meaning them) which is an interesting proposition.  Assuming we could declare martial law and take away all of Elon Musk's stock, when we sold it, well, the share price would plummet - as it does when he sells his shares.  So we would not realize all of that "wealth" that he had, if we were to redistribute it.  Even taking it through onerous taxation would have the same result.

Even if we redistributed all his "net worth" ($230 Billion) to everyone in the United States (screw the rest of the world, right?) it would give each of us a one-time check of about $696.  I don't know about you, but that would change my life - forever! I could open that new cupcake shop I always dreamed about, or kick my meth habit and become a Nun.  We're talking about life-changing events!

But of course, when everyone gets that check, merchants will conveniently offer products priced at $696 until the money runs out.  And as we have seen in recent years, when you throw "free money" into the economy, well, it just raises inflation, which pretty much wipes out any increase in wealth.  The "stimulus" checks of the pandemic era were just an advance on our pay in 2022 - paid back in terms of inflation.

But let's look at the other argument - why not pay employees more and pay CEOs less? That is the argument unions make when companies claim they are broke and cannot hand out raises.  If we assume Mr. Musk has an annual income of $2400 Million (hard to calculate as he is as crafty as Trump with his bookkeeping!) and we divide that by the approximately 100,000 employees of Tesla (I could not find numbers for SpaceX or other ventures he owns or controls) that does come to a tidy $24,000 per employee.  Not a bad raise - but it presumes Mr. Musk is now making zero dollars a year.

You could play this game with any Billionaire. Jeff Bezos makes about $1.7 million a year (He's one of the "poors" I guess, or is better at hiding income!) and has about 1.5 million employees (!!) to pay.  As you can see, his "income" would only give each employee a dollar-a-year raise, which isn't going to change anything for anybody.  But again, we are looking at income, not wealth.  And I suspect a lot of his "income" like Elon Musk's, is untaxable "loans" taken out against his stock holdings.   It gets tricky to do these calculations.

So maybe we should tax Mr. Musk or Mr. Bezos instead?  They should pay for their "fair share" of government programs and defense budget and so forth.   I agree with you there - but realize that the tax antics of Billionaires are just a delaying move - borrowing against his shares to avoid taxes, which will have devastating consequences when the bills actually come due.  In fact, Musk has already had to deal with this - selling shares of Tesla to pay back loans.  What happens if Tesla shares tank between the time he takes out the loans and pays them back?  And I suspect, like margin loans, the banks can force share sales when the price goes below a target value - which in turn would depress share prices further.

Tax avoidance can be a dangerous game to play!

So let's say we take away all his money and give it to the government.  While $230 Billion sounds like a lot of dough, it pales in comparison to the $5.35 trillion the government spends every year.  This one time cash payment would cover about 4.29% of the Federal Government's budget for one year only.  If we taxed 100% of his real income, it would amount to a fraction of a percent.

Wealth inequality is a bad thing, economically - wealth that is tied up in the hands of a few people can cause a economy to stagnate. A healthy and wealthy middle-class is necessary for an economy to thrive.  You need customers for your $100,000 electric SUVs or you'll go broke, too!

But the idea that "taking away" or "redistributing" the wealth of the very rich is going to solve all our problems is, well, nonsense.  And of course, legally, we cannot do this, even if we wanted to.

Tax reform is a good idea - but the amount of income it will generate for the government isn't going to necessarily balance the budget.  And an awful lot of that increased income is going to come from people who consider themselves middle-class or upper-middle-class, who are already paying close to 50% of their income in Federal, State, and local taxes.  Your local doctor or dentist or car dealer is the one getting socked with these tax bills, not the high-flying rich who own their own jets.

But once again, people - and the media - confuse "wealth" with "income" and conflate the two.  As wage-slaves, we plebes only understand income - our weekly paychecks, which we spend as quickly as possible on basic survival needs such as food, clothing, shelter, cars, tattoos, piercings, and of course, video games and drugs.  We don't have enough money - or discipline - to set aside any money to "invest" and create wealth.  And even if we did, we end up "buying" a bogus investment such as gold, bitcoin, nfts, or whatever other get-rich-quick scam comes down the pike.  And when it all blows up in our faces, we pine for "redistributing the wealth" and then go online to Amazon and drown our sorrows in consumerism and hand another penny or a dollar to a Billionaire.

And these same poor folks will vote for Republicans, who promise to slash Medicare and Social Security and of course, cut-off aid to Ukraine and let Putin win (and he will be satisfied with that and promise not to invade anyone else!).  Cutting spending is indeed another way to balance the budget, but for some reason, these cuts are always directed at the poor - no one is saying that those PPP loans should be paid back!  And weirdly enough, it is the poor that vote to cut their own programs.   I guess masochism runs deep among the poor - they think they deserve to be treated like crap.

If I sound jaded, it is because I am.  After blogging for over a decade and approaching 5,000 postings, it is interesting to go back in time and read my blog from a decade ago.  Back then, we were recovering from the delusions that bankrupted many a baby-boomer who got caught in the something-for-nothing mentality and thought their houses were gold mines.

You'd think their kids would have observed this and realized their parents were idiots.  Well, they did, but the next generation just lurched off at a different get-rich-quick scheme, all to the cry of "This time, it's different!" which, by the way, is one sure way to tell if something is a scam or not.

But those halcyon days seem so innocent and pure compared to today.  Back then, we could at least figure out what went wrong and people - for the most part - acknowledged their own malfeasance.  Well, some did. Others externalized on a massive scale and started subscribing to wilder and wilder conspiracy theories.  Baby boomers who "lost it all" to the housing collapse of 2008 were prime meat for Trumpism and Qanonsense in 2016 and today.

And why not?  Telling people hard truths is never a fun job.  You tell people they are fools and spendthrifts and they will lynch you.  You tell them they are "beautiful" and that "but for" those immigrants and colored people and trans folks, they would be rich, rich, rich! - and you are elected President, at least by the electoral college.

And when it all comes apart, they lose their minds.  The dream of free ponies is too beautiful to let die! Yet the fail to realize that all the free-pony schemes in the past always came apart - hurting the little people the worst.  Whether it is Communism or Fascism, the net result is the same - entire countries reduced to ruin.

There is, I think, a middle-way, between the extremes, that would largely solve most, but not all, of our problems.  But no one wants to hear about that.  Half the country thinks Biden is too radical, and half think he is too conservative.

Me, as Goldilocks, thinks that's just about right.

There is an election in a couple of weeks.  It will be interesting to see how people vote.  Will the plebes really vote to abolish Social Security and Medicare - just to "own the libs?"  Stranger things have happened in history!