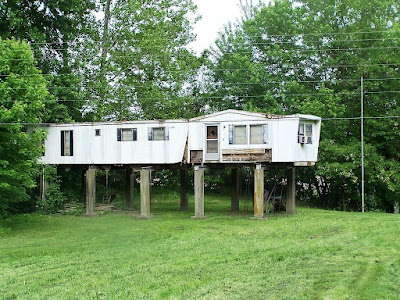 In order to have coverage from flood insurance, you have to first buy it.

A recent article on CNN talks about flood insurance in such oblique terms that you would think the government automatically buys it for you.  It doesn't.  You have to buy it.  And every year, when there is a storm - hurricane or not - the media runs a story about how "mean" insurance companies are, for not paying out for flood damage from a fire policy or how "mean" FEMA is, for not paying out on flood insurance when the homeowner declined to buy it.

The latest gag is to argue that since a home is zoned "X" (low risk for flooding) it is somehow FEMA's fault (or the mortgage company's fault) for not mandating that people buy flood insurance.  I live on a barrier island and have no mortgage - I still have flood insurance.  It isn't that expensive, and if I lived in an "X" zone it would cost very, very little.  But people would rather buy a new Jet Ski than spend $50 a month on an "X" zone policy.  And it's all the government's fault they got flooded out!

Bear in mind that FEMA flood policies max out at $250,000 or so ($100,000 for contents) so for most folks, it is a partial payback - not enough to rebuild or replace the house entirely.  But insurance is supposed to work that way.  With deductibles and all, you are never made whole.  If you were, then people would be encouraged to commit insurance fraud - and make money.  It already goes on as it is - I recounted how one clever fellow in Florida sank his boat three times when he blew up the engines.  The insurance company got wise the third time around when he took out a title loan on the boat before he sank it.  You can't collect twice on the same boat.  But people try.

I wrote before about beach living.  Back in the day, there was no insurance.  You built an inexpensive "beach shack" and used it for summer vacation.  Most were not insulated and indeed, had no interior sheetrock, just bare walls.   If it blew away, you built another one.  People up North had similar shacks in the mountains or by the lake.  Mark's parents had one in rural Maine - it was just a shell with kerosene lamps, a propane refrigerator, and a wood stove - a classic Maine "Fish Camp."   If a forest fire took it out, no big deal.

But today, beach houses and mountain lodges are full-time homes or even if vacation homes, are mini-mansions themselves.  So they are expensive to build and when they get flooded or blown down, expensive to replace.   Most folks building today build concrete houses on concrete pilings with Cat-5 Hurricane windows and roofs designed not to peel off in the wind.  Such houses survived on Estero Island during the recent hurricane and on the Gulf Shore in Alabama a few hurricanes ago.  People posted photos of them and called them "miracle" houses - but it was not Jesus who saved them, unless the builder's name was Jesus Ramirez.

That's how the game is played today.  You either get insurance or you build fireproof or windproof or floodproof.  I might mention the same thing is going on in the windy dry hills of California and elsewhere.  Split-shake cedar shingles look romantic and all, and were popular back in the 1960's and 1970's, but today, you have to have a fireproof roof, clear all debris and brush from anywhere near your house and take other steps to make your home as fireproof as possible.  Wildfires in California are not going away anytime soon - they have been part of the landscape for decades, now.

Insurance companies are not laying down, either.  If you rebuild, they will insist your new home is windproof or floodproof or fireproof or all three - otherwise they simply won't write a policy for you, or they will price it so high you can't afford it.  And hey, maybe that is God's way of saying don't build there.  Or if you do, build something you can afford to walk away from.

We visited Hull, Illinois many years back after a big flood on the Mississippi flooded the town and surrounding areas.  The flood insurance people told folks they would not be covered if they rebuilt in the flood plain - unless they elevated above a certain level.  Most folks found it cheaper to move to higher ground, but a few stayed on.  We saw one mobile home elevated nearly three stories above the ground on stilts.  I guess they didn't want to give up.  It will be hard to climb all those stairs when they get older, I think.

Move away, move up, or move on.  Those are really the only choices.  Choosing not to buy insurance isn't really anyone else's fault but your own.

If our house was flooded out - which could happen, and did happen back in the late 1800's when a direct hit hurricane washed over the island - the maximum payout from flood insurance would probably not cover the cost of rebuilding.  We would have to decide whether to take the cash and move on, or to repair the house as best we could, or tear it all down and start over again, this time on stilts.

Fortunately, I don't have to make that decision today.  But I will make sure my flood insurance premiums are paid up!