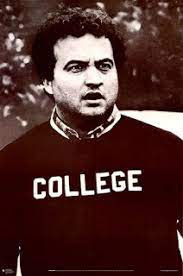 Are the chickens coming home to roost in higher education?

I wrote, more than a decade ago, that maybe the next wave of bankruptcies will be with colleges and universities.  That didn't quite come true, although a number of small, liberal arts colleges, particularly those catering to women and minorities, have struggled or gone bust - or were forced to merge with larger institutions.  The Mom & Pop Diner can't compete with McDonald's.

I also opined that the US News and World Report "College Rankings" were just stupid.  They relied upon self-reported data and used somewhat arbitrary criteria for evaluating colleges.  Not only that, the system used to rank colleges encouraged colleges to work the system by upping their numbers for these arbitrary criteria without necessarily improving the college's real worth.

It seems the chickens have finally come home to roost.  According to a recent article online, a Mathematics professor at Columbia (where my brother got his PhD in puppetry) figured out that the numbers that Columbia self-reported to US News and World Report were, in fact, fudged.  By playing with the numbers, Columbia was able to go from #18 ranked to #2 in a matter of years.  But what is more troubling than the rankings game is that the same professor argues that the whole thing is a money game - designed to cash-in on expensive college educations, so they can support a burgeoning class of administrators who now outnumber actual professors at the school.

Sounds like the makings of a class-action lawsuit.  How many students and grads went there based on these skewed rankings?

At $65,000 per year tuition, Columbia is one of the most expensive schools around.  But is it worth it?  My Brother went there back in the 1990's and as a grad student, taught courses and was given subsidized housing, which made the whole thing a little more affordable.  But today?  Who is paying these outrageous tuition bills?

When I was at Syracuse, the Engineering Department was not very well known.  Today, they have a new "Computer Engineering" building for Computer Science majors - a "science" the only recognized as an "Art" when I was there.   I got some decent grades and was given a small scholarship at one time.  One of the Deans (of many!) explained to me that they had to get the grade average up to improve the college rankings - and that so many of the students at that university basically bought their way in, by paying full tuition.

And that is how they make money.  Foreign students from wealthy families come to America (or did, pre-Covid and pre-Trump) to attend prestigious Universities and get a valuable diploma.  They didn't qualify for Pell grants or scholarships (generally) so their rich parents paid the full tab.  There were a LOT of guys from the middle-east when I was at SU, and they all drove new, grey-market Mercedes they had Dad ship in through Canada.

In addition, we had a lot of students from "downstate" - New York City or more specifically the wealthy suburbs thereof in Westchester, Long Island, and Jersey.  They were spoiled rich kids who had mediocre grades and couldn't get into an "ivy league" school - so their parents bought their way in to SU.  That was back in the 1980's - I doubt it has changed much today.

And that is just a school I am familiar with. I am sure there are many more.  Even the prestigious "ivy league" schools admit "legacies" particularly if their parents donate money for a new wing to the administration building.

The problem, of course, is that not everyone has rich parents.  Not everyone has a scholarship based on their academic credentials or  athletic abilities.  Middle-class kids whose grades are good but not stellar, have to borrow money - a lot of money - and pay it back over time.  And many are finding the value-for-the-dollar of a college education lacking, particularly when the degree they get doesn't qualify them for that "dream job" if it even ever existed.

Now, granted, some of these students have themselves to blame for a lot of it.  They listened to teachers and guidance counselors and even parents, who exhorted them to get a college degree because for their generation it was the ticket to the upper-middle-class.  Now they act all Pikachu-faced when it turns out that a degree in just any old thing with middling grades is not only worthless, but has a negative value in the marketplace.  They are often better off leaving the degree off their resume when applying for a job, lest they be deemed "overqualified."   Oh, and those student loans are still due.

Worse yet are the students who looked at college as four years of a drunken orgy - a chance to play at being an adult, with all the fun and no responsibilities.  You've read all the articles in the paper - kids dying of alcohol poisoning, or getting into fights at bars or deciding to date-rape or roofie a young freshman.   Kids have more time in college to get involved in politics and extracurricular activities than they do studying, it seems.   They view college as a four-year party and when the party is over, it has to be someone else's fault that they have to clean up the mess.

But the fault isn't entirely with the students.  We have made college an almost toxic opportunity - a chance for four years of fun, at the cost of the rest of their lives.  And we can't expect 18-year-olds to make really logical life choices at a time in their lives when they are raging with hormones and wanting to get out and see the world.  Not only that, in many cases, their parents want them out of the house as well.  Teenagers - what's not to like?

So what's the answer?   Do we effectively nationalize the nation's colleges and universities by making them all "free" as Comrade Sanders proposes?  Would government oversight place a limit on how many Deans and assistant-Deans and assistant-assistant-Deans the schools could hire?  Or would that just create a shitload more bureaucracy with no end in sight and the bill being sent to the American taxpayer?

Or do we try a free-market approach?  In some regards we are already doing both.  Since the government is guaranteeing student loans (and by law, protecting them from bankruptcy) they have distorted the market, in terms of pricing.  Just as guarantees of home mortgages, subsidized interest rates, and tax-deductible interest hasn't made homes "more affordable" but instead made them more expensive, the attempts at making college "more affordable" have resulted in dramatic tuition increases.  The problem is, of course, these come at a cost - in terms of student loan debt.

A true free-market approach would do away with all that.  But the end result might be that fewer people could go to college, particularly the very poor.  And without warm butts to fill the seats, many more colleges would go bankrupt.  We've really painted ourselves into a coffin corner, here.

And maybe, just as a pilot in the "coffin corner" needs to slowly back down, we need to slowly unwind the system that has resulted in so much corruption - yes, corruption - of higher education.  In part, this may be organic.  Many young folks are starting to figure out that maybe a college education is not what they really need - or need right away.  I was fortunate to spend 14 years in night school - finally figuring out what I wanted to do in life, more than halfway through.  If I had "stayed the course" and not dropped out, I would have ended up in a career I didn't like or want, in a place I didn't want to live, and likely be unemployed by now (as opposed to retired, and that's totally different!).

So demand-side pressures will force schools to re-think and re-structure, as is already being seen with the demise and struggle of many smaller liberal arts colleges.  What's more, the pandemic has made everyone re-think how we work and play.  Colleges went "online" during the pandemic, and many people went to "work from home" which I had been doing since about the year 2000 (welcome to the club!).  It just makes sense.

What doesn't make sense, in this world of online books, is a college professor charging hundreds of dollars for a textbook that is "updated" annually simply to make the previous edition obsolete, so that students have to buy the new edition - and it kills the secondhand book sales.  Yea, they were playing that game back in the 1980's, too.

Maybe the student-consumers will figure this out and decide on a different course.  So many very famous and successful people either never went to college, or dropped out when it became irrelevant.  Even many in the middle-class find they can make a decent living without some high-falutin' college degree.

It is like what GM went through in the late 1970's - they were selling bloated, poorly made cars that cost too much and got horrible gas mileage.  People found that cheap Japanese imports - as tinny as they were at the time, were a better value - durable, inexpensive, and efficient.  It took many years, and a few bankruptcies, but the "Big-3" American carmakers eventually figured out how to compete with the imports.  Of course, today, they once again have given up and went back to making heavy, overpriced, oversized SUVs that get crappy mileage.  I wonder how that will play out?

So, it may be that natural pressures in the marketplace bring down prices and cut the waste in colleges and universities.  Or, we can keep pining for free college and student loan forgiveness, and the costs will continue to spiral out of control, while at the same time, degrees become worthless.

People point to foreign countries as examples of how free college works.  A friend of mine got a Physics degree in the UK, spending most of his time at the pub, stacking empty pint glasses in a pyramid (after draining them).  I didn't understand how college worked there and why he didn't use his Physics degree to get a better job, instead of working in retail.  Turns out, he got an "ordinary" degree, which was basically a certificate of attendance and little else.  College, for him, was just a place to park a young person for four years while he (hopefully) sorted his life out.

It cost him nothing, but it cost the UK government a tidy sum, and today that same government is trying to rein in spending with college (which is no longer free) as well as National Health.  Funny thing, the Brits keep electing Tory governments - maybe socialism isn't all its cracked-up to be.  Maybe - or maybe that is all about to change, what with the resounding success of Brexit and all.  As the Tories age out and die off, maybe a new generation will take over.