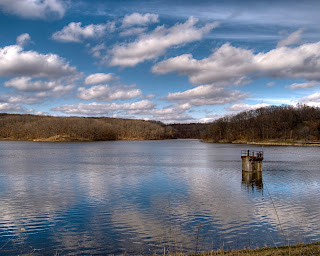 Once the kids are back in school, things quiet down a bit.

We are camped at Argyle State Park in Illinois, and it is one of those occasions when RVing is like they show in the magazines - you have a remote site, not near anyone else, with a view of the water.  No screaming kids, no dudes with loud generators or loud motorcycles, no 20-somethings "sharing" their music with you.

We went out Kayaking on the lake and it was mirror smooth.  You could hear nothing, whatsoever, other than the tinnitus ringing in your ears, and even that went away after a while.  The only noise was the occasional squawk of a blue heron, or the sound of fish jumping - and the splash of our own paddles.

Speaking of blue herons, what is up with them?  You paddle along and see one, and it gets all pissed off that you have "ruined" their fishing spot.  So they take off, loudly protesting your intrusion and then fly to a place ahead of you and then settle again to try fishing - at which point you arrive again and the process repeats.  I am sure that more than one blue heron thought we were doing this intentionally.  Just go the other way, dude!

It is nice to drive around the park and not see another soul.  Most of the folks camped here are in another loop (all bunched up together) and are older retirees.   And we are fortunate that we have having an Indian Summer Native American Summer Indigenous People's Summer and the weather is warm.

But of course, it is a crap shoot, with the weather at this time of year.  We just came from Wisconsin, where it was 54 degrees out - in a "clothing optional" campground no less (there were a few brave souls, I was not one of them, thank you very much!).

Folks ask us how we pick a particular campground.  And the answer is - by chance.  This park was halfway between where we were and where we wanted to go - about 130 miles from our previous spot.  We have never been here, didn't research it much, never read the reviews (until after we reserved it, oddly enough) and just took a chance that it might be nice - and it was.

Life is all about taking chances, particularly when the risks are trivial.  The worst that could have happened is that we might have spent two rainy days in a run-down park with neighbors who are into loud rap music.   But that is rare - and our camper is always a refuge from that (it is rather well insulated from noise - like living in a Coleman cooler!).

But you'd be surprised how many people are scared of such trivial risks.  They only have two weeks of vacation so they have to be perfect!  And as a result, they are inevitably disappointed when they are not - and the miss on life's little pleasures, seeking the large ones.