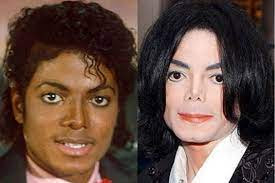 Why is it people feel they need to alter their bodies?

America - and the West - is full of unhappy people.  Folks, it seems, are never happy with the way they look or feel, and have to change themselves, often through drastic means.   There are minor things like makeup and hair styling, of course, which are pretty harmless and quickly reversible.  Then there are things like tattoos and piercings, which can be very expensive and much harder to reverse. And then there are surgical techniques, such as facelifts, boob-jobs, nose-jobs and even penile implants.

What got me thinking about this was I met an older gentleman who had a penile implant - "the pump."  He described the process of having it installed as uncomfortable, to say the least.  It made me cross my legs to hear about it.  Anyway, he can pump this little bulb in his scrotum and voila! - instant erection.

Why he did this was beyond me, but judging from the number of ads on television and online for various boner drugs ("the little blue pill") a lot of men have insecurities about their genitalia.  Women are no better, of course, often risking life and limb (in retrospect) for silicone implants so as to make their breasts larger and (the theory goes) more appealing to men.

Why is it we have to alter our body images and have such negative self-images of our bodies?  Granted, in other cultures, such things are also done.  Primitive cultures historically have used tattoos and other forms of body modification to mark themselves, or enlarge ear lobes, lips, or even necks.  The standard of beauty, it seems, has always been artificial.

But in addition to costing a lot of money, these body modifications can be somewhat dangerous or even fatal. Burst breast implants have caused a lot of problems for women in the past. I am not sure that some of these other techniques are much safer - we've all seen the effects of plastic surgery gone wrong.

Of course, there are situations where such surgeries are warranted.   Reconstructive surgery, for example, can help restore someone's self-esteem.  But making your titties bigger so some man will want to lay you?  Seems kind of lame to me.  Any man who is attracted to you only because of breast size is not someone you want to date or marry.  And this obsession with erections is similarly suspect.  Are we, as humans, really that vain and insecure? (Yes, I guess).

Today, of course, this whole "transgender" thing has been thrust into the spotlight,with some folks, not even of legal age, wanting to take hormones (always a safe bet! /s) to grow or reduce breasts, and go under the knife to rearrange genitals (crosses legs, again!) in order to "change gender."  We are told this is "life-saving" surgery, because without it, people would kill themselves.  Imagine the slaughter that must have occurred before such surgery was invented.

And it was invented fairly recently.  The first attempt involved transplanting female organs to a male, and in an era before rejection-blocking drugs, it ended up killing the patient.  But with advances in medicine, it may be possible to transplant a functioning uterus into a male patient (vaginal transplants have already been done with female patients, apparently).

Perhaps one reason these things are occurring in Western countries is that we are wealthier countries and can afford such surgeries.   Of course, there is some debate as to who would pay for this (Government? Private Insurance?) and whether this is a "necessary" or "elective" procedure.

Healthcare is a limited resource, and thus has to be rationed - triaged if you will - to determine who should and should not receive care.  In our country, those with money get all the care they want, including plastic surgery.  Those who don't have money often have to suffer (literally) with lesser care and often die far younger as a result.  I had a friend of mine who was diagnosed with cancer.  The hospital told him to bring $20,000 on the day of surgery or not bother showing up.  The surgery saved his life - he managed to raise the money.  Others are less fortunate.

In many other countries, they have nationalized health services.  And yes, in those countries, decisions have to be made as to what is affordable and what isn't.  Do we give a heart transplant to someone who is 70 years old and a chain smoker (who refuses to quit) and is 100lbs overweight (and refuses to even try losing weight?).  It is a tough question.  And a tougher question is, in a nation where healthcare is paid for by the government, does the government cover boob-jobs and sex changes?  I would be interested to know.

The name of this blog is Living Stingy, so you might guess I am not a fan of things like tattoos and piercings.  Oh, sure, I will fake interest in someone's tattoos - and indeed, the better ones can be quite artistic.  They are also helluva expensive, too.  Myself, I have no desire to deface my body with holes or demarcations.  I am happy to leave it alone - not only is it less painful, it is cheaper, too!  And I am all about the cheap.

In a way, I feel bad for people who think they need to augment their dick or make their titties big.  I feel bad for people who think they cannot live in the body God gave them, even if they feel it is the "wrong" gender.  Gender, these same folks tell us, isn't about the bits 'n bobs that physically define us.  If that is the case, why change the bits 'n bobs?  Throughout the ages, there have been men who have lived as women and women as men - without resorting to drastic surgery.  The problem with body modification is, of course, there is no going back once you go down that road.  These are not readily reversible procedures.

I think it is simply easier to accept yourself the way you are - a unique individual with all the inherent faults any human has.  You can modify yourself into something else, but what that is, isn't necessarily you, but the creation of a surgeon.

But I think not.