The Problem(s) With Florida 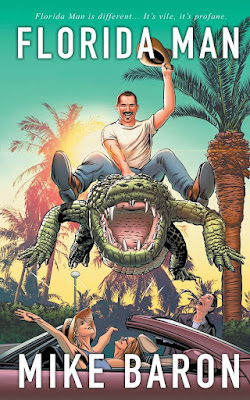 Florida used to be something different than it is today.

What the hell happened to Florida, anyway?  When I was a kid, it was a different world.  It was reliably Democratic, even after the "Southern Strategy" switched Southerners from Democrats to Republicans.  Florida was never really part of the Old South in the first place.  And the only really populated areas were around Miami - which was full of retired New Yorkers (mostly Jewish) who would turn out at election time to vote Democratic.

Today?  There is one gay resort left.  The gay bars have vanished.  The few "drag bars" are clown shows for heterosexuals from the Midwest to come and mock men in bad drag.   The ratty old parts of town were torn down and made into condos.  It's all about money now - and most of the gays we knew from earlier years sold out when the homes they bought in the 1980's for a pittance were now worth well over a million bucks.  We gentrified our way right out of town!

But that's just Key West.  Florida used to advertise that 1,000 people a day were moving there - and they were.  Some were retiring from up North and others were just moving there willy-nilly because they thought there might be jobs or something - these latter folks became the prototype for the "Florida Man" we see today.

Back then, Miami was one city, Fr. Lauderdale, another.  Little towns and villages dotted the coastline, inter-spaced with orange groves. Lauderdale-by-the-sea, Pompano Bach, Deerfield, Delray, Hollywood, West Palm - each with its own character.  Over time, these grew together until they became one mega-city extending from Homestead all the way to Jupiter - and beyond.  When you fly over it at night, all you see are lights along the East Coast - bounded only by the Everglades in the West.

The Villages started out as a trailer park, but quickly morphed into something else - and continues to grow by leaps and bounds every year.  Until they run out of retiring boomers, it will continue to grow as well.  More and more people moved to Florida, but not to the coasts, but the center of the State, where property taxes were somewhat reasonable and land was cheap. People on the coasts were learning the hard way that no income tax doesn't mean everything is free - or that the local governments were fiscally responsible.  When property values skyrocketed, local governments just spent the new tax money, rather than cut the millage rates.

With the increase in population outside of Miami, Florida slowly turned from a reliable Democratic stronghold to a solid Red State.  Bill Clinton was the last Democratic Presidential candidate to carry Florida - if you don't count Al Gore - until 2008, when Barack Obama won in a squeaker.

Then there is Disney.  Orlando went from a small, sleepy agricultural town, into one of (if not the) largest mega-cities in the State.  And at first, it was all about amusement parks, but over time, the area has morphed into a center of business and industry as part of the "New South" and the population boomed.

As did the rest of the State.  Mark's grandparents had a cottage on Ft. Meyers Beach that was accessible only by driving on the sand.  They kept an old Ford "woody" wagon at the beach, as Betty (Mark's Grandmother) didn't want to get her Cadillac stuck on the beach.  Today, the road is paved and the tiny cottages such as Mark's grandparents had, are now either mini-mansions on the water, or high-rise condos.  It can take hours to get from one end of the island to the other, during season - a trip that took only minutes in years' past.

And so on down the line.  Even the panhandle, which was once viewed as the Redneck Riviera, is being expanded and gentrified.  Jacksonville went from a third-rate city to the largest (by area) in the State.

Granted, a whole lot of this is related to the general expansion in population of the US in general, and the trend during the 1970's through the 1990's of people migrating from the "Rustbelt" to the "Sunbelt".  And a lot of what was and is wrong with Florida dates back decades - even a Century or more.  Land grabs and land scams are as old as the hill.  People don't talk about it today, but back in the 1960's and 1970's if someone told you they had Florida land for sale, you could be sure it was underwater.

So, Florida has always had this reputation as being a land of opportunity - for shady dealers.  The explosion of cocaine in the 1980's was just a continuation of that trend.  Miami Vice was more of a documentary than fiction.

Florida used to be an attractive place to live, though - a place to retire for cheap and enjoy the sunshine. Most retirees had a home "up North" and were "snowbirds" as the summers in Florida were unbearable.  But even that has changed, with more and more people living there full-time and never leaving their homes in the Summer months, but instead, staying inside and enjoying this newfangled thing called air conditioning.

Yes, air conditioning built today's Florida.  Most "retirement" houses in Florida were built without air conditioning, as they were not occupied in the hot and humid summer months. Our condos, for example, in Pompano, were built in the 1960's and didn't even have window units (steel-framed casements!) when built, as the "snowbirds" were long-gone by April.  Mark's Grandparents' house was similarly constructed - like most homes for retirees, it was vacant for most of the year.

But something has changed, fundamentally, besides the advent of air conditioning.  Florida is no longer a fun place to live and in many respects, not even a fun place to visit.  Crime is rampant and people drive like maniacs.  I coined the phrase - more than a decade ago - while driving there, "Welcome to Florida!  How can I pull out in front of you?"   You see, Floridians are always in a hurry, and if they see an RV coming down the road, they will pull out in front, lest they be "stuck" behind a "slow" RV.  This usually means you have to lock on the brakes, which in turn forces you to drive more slowly, thus perpetuating the stereotype.

Of course, that is assuming the person pulling out isn't just staging an accident for insurance money.  Florida has more personal injury attorneys per capita than any other State - or so it seems from the number of billboards advertising them.  Insurance fraud and insurance scams have always been rampant.  The latest gag with roofing is only the most recent chapter in this saga.

Corruption in local and State governments has always been an issue.  Land developers, both crooked and legitimate (hard to tell sometimes!) have always had a friend in Tallahassee.  Local government has always turned a blind eye to various scams and cons, as the politicians get funded by the same scam artists.  You could argue the same is true for any State, but Florida seems to be on the forefront of this sort of nonsense.  Before it was outsourced overseas, various call center scams often originated in Florida - not to mention invention broker scams and other cons.

But the fundamental problem with Florida could be summed up in four words: Too Many Damned People. What was a fun place to retire to or vacation to became a nightmare when everyone and their brother decided to move there.  Cities which were once easily navigable and user-friendly became traffic-jam nightmares.   Once nice neighborhoods of working-class retirees devolved into ghettos -until they became gentrified to death.

South Beach, for example, started out as a string of art deco tourist hotels on the beach.  It devolved, by the 1960's, into rundown retirement apartments for retirees from up North, who were quickly running out of money.  Today, it is a hyper-trendy tourist district - a continual traffic jam and a string of slimy restaurants all serving the same bad food.  A maître d' will literally grab you by the arm and try to seat you at a table, against your will.  Tourists are just another crop to be harvested, much as oranges were, years before.

Like I said, Key West - and the keys in general - are not so much attractive anymore.  Duval street is once again seedy, this time with endless t-shirt shops and "Margaritavile" style restaurants, all serving the same dreck off the Sysco truck.  Actually, this echos much of Florida's tourist spots.

Of course, the same could be said for many other tourist places.  The waterfront in Savanna Georgia, for example, is about the same thing, albeit on a much smaller scale.  Folks tell me they "did Savanna" by touring the waterfront - they might as well as stayed home and went to TGI Fridays!  It is hardly the "local culture" - to the extent that exists anywhere anymore in America.

If I sound down about Florida, it is because it is what it is.  We still visit there - there are still a few places to go where it isn't too crowded, at least on certain days at certain times of the year.  If you can avoid holiday weekends and various festivals, it isn't so bad.  The oddly-named "Faver Dykes" campground is nice, for example, except during bike week in Daytona, when it is so crowded you would need to make reservations a year in advance.  Watch for gators.

Florida is still attractive and still a draw for what we call "temperature vacations." Florida has almost a mystical meaning for folks in cold climates, such as in Michigan or Minnesota.  You tell them you used to own a house on Ft. Myers Beach and they think you are as rich as the Pope or something. To them, Florida is a shangri-la of warm days and cold beers.

And it is like magic, to them, to get on a $99 flight from Detroit, parking your salt-laden car in the snow and slush and then get off the plane in Orlando in the sun and warm weather.  You can always spot the tourist by how scantily they are dressed.  Locals are wearing blue jeans and long-sleeved shirts in the winter.  Tourists are wearing thongs - and the women even less.

(For some odd reason, the Brits like to visit Florida in the hot and humid summer months.  I guess they need that temperature extreme to burn out all the cold and damp from their home country - it can sink right down into your bones!   For Florida locals, this summer tourism is basically found money!).

But of course, all of this could change in a real hurry.  Baby boomers are meeting the grim reaper, one by one.  The next generation isn't as large as the current one - will the land boom in Florida continue unabated?  Who will buy all the million-dollar homes they are now putting up in The Villages these days? (and whatever happened to the concept of Florida as a cheap place to retire?). That is, of course, if hurricanes and rising sea levels don't sink the entire State.  We'll just have to wait and see.

But other than as a temperature vacation, I am not sure Florida is good for much, anymore!