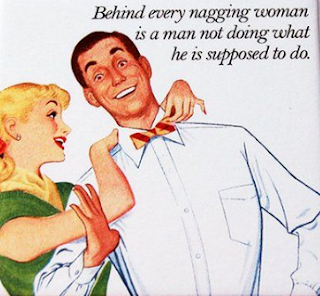 What is nagging and why do people do it?

What exactly is nagging?  Why do people do it?  And how can it be stopped - or can it?  I was thinking of this the other day.

Now, in response to this question, there are three right answers and several wrong ones.

The right answers are:

"They are on the dresser!" or

The wrong - nagging - answers include:

"You're always losing things!  Why don't you keep better track of things!" or

You see the difference.  Someone asks a factual question ("Have you seen my keys?") and the answer they are looking for is a factual one - one that will help them.

But the nagger decides this is the opportune moment to pick apart their spouse's flaws, real or imagined, or just kick them when they are down and most vulnerable.   They already feel like shit, being late for work and having misplaced the keys, why not make them feel worse?

And we wonder why the divorce rate is so high - and the spousal murder rate isn't lower!

In the movies and comic books, nagging is usually depicted as a housewife constantly talking to the husband - and reminding him of things to do, like take out the garbage.  But nagging is more than that.  It is this incessant need to tear down a spouse or a friend, with this constant background level of criticism.

If we dissect nagging, we see why it is traditionally something that wives are accused of doing to husbands.  Nagging is all about the power imbalance.  Until fairly recently, women were unempowered in most relationships and in fact, little more than property - and still are, in many most parts of the world.  But with changes in social attitudes, I am sure that husbands will start to nag as well - and probably many already are.

In almost every relationship or marriage, one party has more power than the other - it may be slight, it may be severe.  In America, traditionally the husband was the "breadwinner" and had a job and a career and the social status that came with it.  In most households, he was "head of the house" and made all the important decisions - at least on paper.  Wives had to be content with basking in the reflected light of their husbands, being "Mrs [Husband's Name]" and not even having a name of their own.

But nagging gives the more submissive party in the relationship a chance to get even, so to speak - to assert some form of power or authority over the dominate party. It is akin to how powerless inner-city youth vandalize and spray-paint things - they are attempting to exert control over their own environment in the only way they know how.

Nagging may be the only way to achieve a power balance in a marriage.

Or it may be something else.  Sometimes people don't respond to simple requests (e.g., "take out the garbage") and thus, the request has to be repeated again and again, until it becomes nagging.   When a person realizes that there are no consequences to ignoring the first request, they wait until the second, third, or fifteenth, before taking any action.  They "win" at the game of passive-aggression, in that, while they are forced to take out the garbage in the end, they make the spouse whine and complain about it the whole time.

Marriage is like a war - or many small, pointless battles.

I think also that television is to blame, in particular, the "Sit-Com" with its put-down humor and annoying laugh track.  We have friends who watch way too much television (in other words, like 90% of America) and they enjoy this put-down humor, which is, in effect, a form of nagging.

In the oh-so-funny sitcom, the main character comes in (to applause, naturally, because entering a room is worthy of applause) and says, "Have you seen my car keys?  I'm late for work!"  The other character(s) then say amusing bon mots with put-downs of the main character's personal flaws, met by howls of laughter - from the laugh track.

That's television in a nutshell, and dealing with people who watch this drivel gets tiresome.  To begin with, they start to think this is funny and worse yet, normal behavior.  So you try to talk to them and they insult you - or the clothes you wear or you hairstyle or whatever.  It isn't that they don't like you (well, maybe...) but that this is what they think is normal for humans to do.  Insult comedy - Don Rickles has a lot to answer for.

Whatever the cause, nagging is annoying - and a form of passive-aggression.   Over time, it can be destructive to relationships and marriages. The extra-martial affair is attractive not because of the wild sex, or "true love" but because, as at the start of any relationship there is little in the way of nagging.

But can it be stopped?  That's the nut to crack.  Once the nagging habit starts, it is hard to curtail.  You can call out the nagger, but that does little to attenuate the problem.  Or you can, like so many spouses do, just ignore it and let it become the background noise of any relationship.

Sadly, that may be the best any of us can hope for.