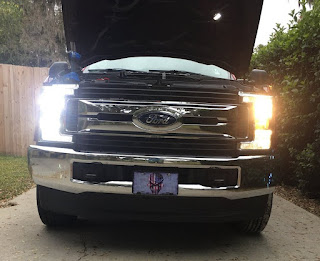 Automatic headlights sound like a great idea, but they are just annoying.

Years ago, I was parking my old Camry in the parking garage at law school (that cost a bundle!) and a lady in a brand-new Crown Victoria parked across from me.  As she walked away, I said, "Hey lady!  You left your lights on!"

She tersely replied, "Oh, those are automatic headlights - they go off by themselves!" as if I was some plebe with an old-timey car with an actual light switch.  "Whatever!" I replied.

Two hours later, after class, she is asking me for a jump start.  Seems she didn't have the switch in "automatic" mode but in "ON" mode and it drained the battery dead.  Right away, I was not enthused with automatic headlights - it seemed to me a better idea to have actual control of these things than to leave it to to chance.

That was over 20 years ago.  Automatic headlights were a novelty back then, today they are present in almost all cars.  Both the F150 and Hamster have them - I never use them.  There are other weird toys and programming with lights as well, some useful, some annoying.  Many cars will measure battery voltage and when it gets to a level where it will barely start the car, it will shut off power accessories and lights - even if you left them on.  Our 2002 BMW X5 did this (through the "power control module") although I was able to drain the battery dry once by leaving our trailer plugged into it overnight.

GM thought it would be keen to make the backup lights go on when you exit the car or use your remote to unlock it.  The idea was, it would "light your way" and you could see where you were walking.   The F150 has a similar feature - lighting the "puddle lamps" under the mirrors and the truck bed light and parking lights, when you hit the remote.  It is a little less jarring than the backup lights, and no one is confused as to whether you are backing up or not.  On more than one occasion, I have stopped to "let someone out" of a parking space when their backup lights suddenly came on, only to feel foolish when I realized the owner of the car was across the parking lot and had just hit their remote key fob.  Cut it out, General Motors!  No one wants their backup lights on when they aren't backing up!

On the F250, they decided to make all four LED headlights go on for "low beam" and it is blinding.  Worse yet, many owners seem to leave these lights on all the time, even during broad daylight.  I am guessing this is again, the "automatic" headlight option engaged.

It is kind of sad, but Americans have lost the ability to drive.  Automatic headlights are annoying, but then again, I see so many people driving grey cars, in the rain, at dusk, with their lights off - ditto for the fog.  "Why do I need my lights on?" they say, "I can see everyone else!"  Yes, but no one can see you!

So we have automatic headlights, automatic wipers, lane control, automatic parking, automatic braking, and of course automatic transmissions, which started this whole nightmare.

The image above is from an F250 discussion group where owners complain their headlights are not bright enough.  Judging from the patriotic skull license plate, I am not sure I want to meet this person - the culture of belligerence strikes again.  I am sure he has a "punisher" sticker on the back, next to his "Let's go Brandon!" sticker and fails to appreciate the irony.

NOTE:  Putting higher wattage bulbs in a car, particularly older models with incandescent lighting, can cause problems if you over-amp the lighting circuitry.  At the very least you may blow a fuse, and if you replace that with a higher amperage fuse, you may melt the wiring.  With LEDS, this is probably less of an issue.

And if you don't know if you have automatic headlights or not and/or don't know how to turn them on or off, shame on you.  Go to the DMV and turn in your license!  A friend of mine confessed they hadn't touched the light switch on their car since it left the dealer, five years ago, but instead left it in "automatic" mode.  Tee-hee!  As you might guess, they are a really shitty driver.

Maybe it is just me, but I think it is time to reclaim control of our cars - or what little control we have left - starting with the light switch.  Just turn the damn automatic headlight thing off.  If you are so unaware of whether your lights are on or off, and whether they should be on or off, maybe you shouldn't be piloting two tons of metal down the road.

Just a thought.  And if it raining, turn your damn lights on!  It's the law in many States - and should be, in all 50.

UPDATE:  A reader reminds me about DRLs - Daytime Running Lights, which was a requirement a few years ago but has seemed to fall by the wayside.  The problem with DRLs is that people drive at night with only their DRLs on, not realizing their regular headlights (and taillights) are off.   I think it is no longer required - like the 1974 ignition interlock, it was a good idea on paper.  I think on some cars, they can be disabled, too.

The same reader recounts how adding an audible backup alarm to a GM truck (wired to the backup lights) results in the BEEP! BEEP! BEEP! every time you lock or unlock the truck.   Progress!