Hurricane Recovery - Faster Than You Think! 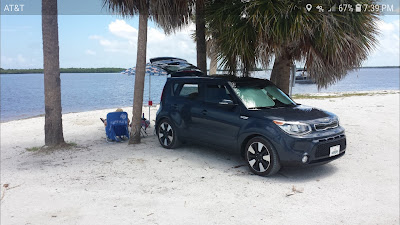 Our favorite picnic spot on the Sanibel causeway is now underwater.  But not for long....

People are freaking out - and rightfully so - at the level of destruction caused by hurricane Ian.  It hit Ft. Myers Beach (Estero Island) pretty hard, pretty much washing over the island and wiping out a number of homes.  Down the road, the causeway to Sanibel island was wiped out in many spots - the bridges collapsed in sections and water rushed over the sandy parts, forming new channels - including one right where our hamster is shown parked above.

The death toll is unknown, but it could be bad, as a lot of people didn't leave when they had the chance.  Many more left cars and boats behind, only to be destroyed by the storm.  It will take months and years to rebuilt it all - but a lot will be built back faster than you'd expect.  The causeway to Sanibel will likely be fixed in months, I suspect.  But we'll have to wait and see.

The big problem is insurance.  I wrote before that we had a windfall (sorry, pun) profit with our condos in Pompano Beach after a big hurricane, as the State Farm adjusters all needed a place to stay during the normally-slack summer months.  Those State Farm checks paid our mortgage!

So they will once again send down agents and appraise damage and cut checks, although State Farm no longer writes on coastal areas and many more agencies have left Florida (as I noted before) due to the roofing scam (which will go into overdrive now).  The few companies left may also leave the State or jack their rates - already high - through the roof.

The insurance issue could have ripple effects across the country, as other companies re-think their exposure to storm damage.  Anything on any coast is suspect - Texas, the Carolinas, California-Oregon-Washington (with added tsunami risks!) as well as New England which was socked with hurricanes.  You do remember what happened to the Jersey shore, right?

Even inland areas are not safe.  I wrote before how we traveled through Vermont on Route 9 after a hurricane - yes, a hurricane - hit that land-locked State.  The road was washed out in several spots, but the Governor redirected road crews across the State to stop work on every project and rebuild Route 9, which they did in record time.  So it can be done.   The main road of Estero Island looks bad, but it is just sand over the road.  When the hurricane hit in the 1950s, they brought snow plows from up north to move the sand away.  The same will happen again - or something similar.

On the other hand, many entire neighborhoods were reduced to rubble.  The question is, will people rebuild and what will they build if they do?  Already the island was over-developed, as I wrote about before, more than once.  Old houses were torn down and replaced with high-rises, but the same narrow road handled all the increased traffic.  It took hours to traverse the island, which is hardly larger than the one I live on.

Maybe this is a chance to rebuilt in a way that is better for the environment as well as traffic flow and quality of life.  Nah!  Can't have that!  This is Florida, after all.

It is interesting to note that in the views I have seen so far, the newer houses and condos, built on stilts, and made of concrete, seemed to weather the storm much better.  The old "beach shacks" made of wood, floated away and were smashed to kindling.  No doubt, insurance companies (and zoning laws) will require that any new construction be elevated and hurricane-proof or at least resistant.

But whether it is affordable to rebuild is the question.  As I noted in an earlier posting, the property taxes in Florida are obscene.  So if you buy a wiped-out house from the owner (who cashes his insurance check and leaves) and you build a million-dollar home on the bay (it's been done, a lot, there) your property taxes will be in the five figures, easily.  Add in a five-figure insurance bill and you wonder who can afford to live there.  Even a half-million-dollar home is unaffordable - which is why we sold Mark's parents home on Ft. Myers Beach, when they passed away.  As out-of-state owners, we'd be looking at 20K a year in taxes and insurance and would have to rent the place, week by week, to vacationers, just to cover costs.  And of course, today, we'd be looking at a vacant lot.

Actually, it was a vacant lot a few years ago, when a storm came in (two years after we sold out) and pretty much destroyed the place.  And that was just a "tropical depression" not a major wipe-out that we had this time around.

We are fortunate - so far - that Jekyll seems to miss hurricanes.  Florida sticks out into the Gulf Stream, as does South Carolina.  The Georgia coast - all 100 miles of it - is inland from the Gulf Stream and protected not only by barrier islands, but by offshore sandbars and reefs which mean we have shitty surfing, but little erosion.

But that doesn't mean we are safe.  In the late 1800's a hurricane hit the island dead-on and water washed over the island much as it just did to Ft. Myers Beach.  Fortunately, most of the island was uninhabited at the time.  Today, it is only 1/3 developed, but that still means a huge economic loss if we get a major storm.

I am sure a few savvy investors will fly down to Florida on private planes and start snapping up damaged properties and either bulldoze them and build mini-mansions, or do half-assed repairs and sell the mildew-smelling homes to unsuspecting buyers (we've seen more than a few in our real estate adventures in the sunshine state!).

But on the whole, I think within a few years, all will be forgotten, particularly if there is not another major hurricane making landfall.  There are lots of hurricanes out there - if you visit the NOAA site during hurricane season, you will notice this.  Many - maybe most of them - either fizzle out in the deep ocean, or hit "other countries" which of course, as Americans, we don't care about much, other than to throw paper towels at them.

And once again, we will get complacent, and then a big storm will hit - and everyone will act like this never happened before.

What would I do if hurricane Ian turned sharply West and wiped out our island?  Hard to say.  FEMA flood insurance covers only $250,000 which they claim is the cost of rebuilding the house.  If this is so, then the cost of the land is another quarter-million.  Problem is, if you want to just "walk away" no one will pay you much for a piece of land that was just scoured by a hurricane, particularly if everyone else is selling at the same time.

People like to talk about insurance scams - and they exist.  But for the most part, with deductibles and all, you don't come out ahead when making an insurance claim - you end being made partially whole, but not entirely whole.  And it is rare that you would come out ahead.

But then again, sometimes it happens.  When Mark's stepmother weathered one of the minor hurricanes on Estero, the insurance company came out and wrote her a check for $10,000 to repair the screen "cage" around the swimming pool.   She called her handyman who repaired and re-screened the cage for $3000.  "I feel guilty about this!" she said.  We told her to bank the money - the next storm would not be so generous!

To the insurance company, it was a minor payout and the cost of researching the cost of repairing versus replacing the cage wasn't worth dickering over - particularly when there were hundreds of other houses to visit and adjust.  And of course, they just pass on these costs to the consumer - so Floridians love to gloat about how they "pulled a fast one" on the insurance company, but then bitch about the outrageous premiums.

Mark's Uncle once had a chimney fire in his house.  Before he called the fire department, he pulled logs out of the fireplace and rolled them on the carpet. "This way I get new carpet!" he boasted.  I am not sure he came out ahead there, but it illustrates the mentality of some people, particularly folks who consider themselves to be "operators" like Mark's Uncle did.  By the way, that's called insurance fraud, although the $500 in wall-to-wall carpet wasn't worth litigating over, from the perspective of the insurance company.

Of course, hurricane season isn't over quite yet.  So hold on to your hats!