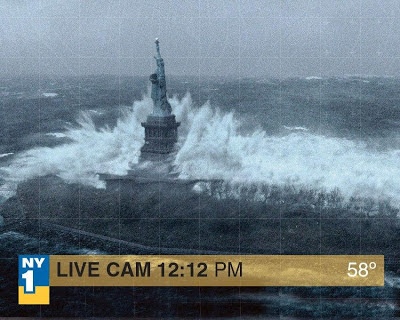 
Having lived through a number of hurricanes in Florida and one in Washington, D.C., (where we were out of power for a week) the irony of post-hurricane cleanup and the nonsense that goes on in the media, never ceases to amaze me.

1.  People spread fake stories and fake images: The above image is, of course, from the movie, "The Day After Tomorrow", and not from any hurricane.  But people are spreading it online as an actual shot from hurricane Sandy, along with a number of unrelated images.  This happens like clockwork, after every major storm - people trot out the same photos, often photoshopping in local landmarks, and then spread them via mass e-mails as "incredible shot of the big storm!"

During Katrina, people spread all sorts of rumors about murders in the Superdome and "bodies stacked in meat lockers under the SuperDome!"   No one asked why there would be meat lockers in a football stadium.  Seems like an obvious question to ask.

During this storm, a campaign manager for a GOP Congressional candidate sent out a number of "tweets" with alarming comments about how the entire stock exchange was underwater.  The irresponsible media reported these as fact (which is scary).    Why would someone just make up stories like this?  Compulsive liar?  Oh, right, campaign manager.

2.  People spend enormous amounts of time in line getting trivial things:   Today on NPR they were interviewing Joey Buttafuco (apparently) who said he spend three hours today driving all over New York looking for gas and waiting in long lines.    Here's a clue, Joey:  If you have three hours to kill, you don't really need gas.  And driving all over the place burning gas to try to find gas is idiotic.   Park your car and just stay home for a few days.

After one hurricane in Florida, the local radio station was blathering on and on about "free ice" being given away in Miami.  The line went around the block.  One of my neighbors went down there and came back with a melting bag of ice and two military "Meals Ready to Eat" (MRE) that they said tasted like crap.   What was the point of all this?   Nothing, except that it was FREE and the radio was hyping it, so it must be good, right?   We were hardly starving or needed ice or anything.  Sheesh!


3.  People act as though Electricity was Oxygen:   Being without power is weird, and it takes a while to stop reaching for light switches every time you enter a room.   But you can live without electricity, unless you are on a heart-lung machine.   One couple on the news reported that they "self-evacuated" on an Army truck and went to a local shelter, because their undamaged house was without power.   I am not sure that sleeping in an army cot in a gymnasium with a bunch of homeless people is preferable to sitting in your own home, snuggled under blankets and reading a good book.

We lived for a week without electricity in Washington, and it was no big thing.  People went back to work within a day or so.   It was annoying, and many folks cranked up generators (with extension cords criss-crossing the neighborhood) and we all got by.   Turns out, you really can do without refrigeration, at least for a few days.  Yea, canned goods gets tiring.  But you get over it, pretty quickly.

4.  The media never reports the undamage:   If you watch the television, you may rightfully think that all of Manhattan is underwater and it will take months, if not years for the city to recover.  Within a day or two, however, buses and much of the subway system was up and running.   What about lower Manhattan?   All those flooded subway lines?   Well, these are largely the same subway lines that were flooded after 9/11 - and we managed to get those up and running again.  The media reports breathlessly about "unprecedented flooding" when the precedent was about 10 years ago.

Similarly, they show endless footage of downed trees, burned homes, and other damage from the storm.  But they never show the streets that are open (most of them) the people with power, and the folks who suffered no damage at all.

5.  People act shocked that beachfront properties are damaged:   From the media reports, you might believe that most of New Jersey is now just a muddy shallow bay in the Atlantic Ocean.   And if you owned a house on the beach, this is probably the case.   For some reason, we act shocked when houses built on barrier islands (and often right on top of the barrier dunes) wash away in a storm.   In some of these neighborhoods, flooding and destruction are so commonplace that the locals don't even take note of it.  You don't hear people in the Outer Banks whining all the time when their beach homes wash away, do you?

My Grandmother lived in Redbank, New Jersey, and she belonged to a beach club - one of several dozen or so located on a sandy strip of barrier island.  During one storm (which was not even a hurricane) the entire island washed away.  Not just "damage" to buildings, but the disintegration of an entire island.  Dozens of these beach clubs suddenly ceased to exist along with the beach.

Storm damage to vacation homes is a predictable event, not some weird outlier behavior.  Stop acting shocked when a beach shack drifts away.

6.  People do stupid things:  With every storm such as this, there is always the jackass who decides to drive through a flooded street, only to discover the water is chest-high.   And people die this way.  During the storm in DC, people would start up generators, but put them in their garage (for fear of them being stolen) and end up dying of carbon monoxide poisoning.

7.  The Police act like idiots:  During Hurricane Katrina and now during this Sandy, the Police spend more time trying to keep people from returning to their homes that they do actually trying to help people out.   One fellow interviewed in New Jersey reported that he was just fine after returning to his undamaged home, despite the lack of electricity.   He went to work the next day and when we came back, he had to negotiate with the Police at a roadblock.  They were "not letting anyone back in" to the "storm damaged area" for fear for their safety as well as "looting".   Here's a clue:  Why not take down the roadblocks and instead search for looters.  The sooner people return to their homes, the sooner the cleanup can commence and the easier it is to cleanup (when a house sits with water in the basement for a week, you have a real mess).

Then, for some reason, three days later, the Police decide that the roadblocks are not necessary.   It is just idiotic Policing - showing authority and abusing power.  In some cases, people end up getting shot over stupid stuff like this.   Frankly, if a hurricane struck our island, this is what would worry me the most - not the storm, but the reaction by the local "authorities" who would let our homes molder and rot with dampness, and keep us away for arbitrary reasons.

Of course, you can't even think to criticize the actions of these "first responders" as since 9/11 every policeman and fireman is now a sainted hero, if not an outright God, even if they are just a redneck cracker Sheriff from Bumfooque County.  Yes, many of them do heroic things.   But a lot of them really do stupid things.  And these unnecessary roadblocks and cordoning off neighborhoods merely because there is no electricity or out of fear of looting is stupid.

* * *
The list goes on and on.   The point is that we recover from these storms, over time.   Except of course, Hurricane Katrina, which for some reason is still flooding the lower 9th ward in New Orleans.  It must be, as we still talk today about the "Victims of Katrina".  (You can't be a storm victim for a decade, sorry).

The cleanup from this storm will go faster than you would expect.   We were in Vermont two years ago shortly after a major hurricane came ashore and washed out a number of roads in South end of the State (including Route 9).   The State Department of Transportation took every contractor and road crew off their construction jobs and put them to work repairing that road.  By the time we got there, not a month or two later, the roads and bridges were largely repaired.   It was pretty amazing, but it is a matter of willpower, not miracles.

And the same will happen in New York and New Jersey.  This isn't rocket science.   Electricity will be back on within a week or two, and most roads will be reopened by then as well.  Rail lines will be repaired.  It will all get fixed.   Of course, it may take longer to repair your beach house, if you can indeed even rebuild on the site.  But that's what insurance is for, right?

But the media will have none of that.   Everything is broken and it is going to stay that way, forever (like with Katrina).

They were interviewing a member of the Army Corps of Engineers "de-watering team" and they asked him how many months or weeks it would take to pump out the Subway tunnels.   You could see the disappointment in the reporter's face when the Engineer replied, "About 48 to 72 hours, once we start pumping".   Hours not days or weeks.

"And where will you pump all this water to?" the reported asked, as if it were some impossible problem to be solved.  Again, the crestfallen look on her face when he replied, "Well, back in the ocean!"

Army Corps of Engineers - the "Get 'er Done!" division of the military.

Listening to the media is always dangerous.  They like to posit that we are all victims and that everything is awful.   Why is this?  Because it sells newspapers and sells eyeballs.  No one wants to hear good news, it seems.   We all like to wallow in "Ain't it awful?" from time to time - or continuously.