The Other Side of the Story.... 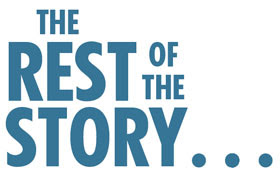 While you shouldn't fall prey to conspiracy theories, it pays to think about the untold side of the story.

A reader recently commented on my last posting about Mortgage Fraud, claiming I had not read the MSNBC article carefully enough.  The guy in the article was persecuted!  A rogue IRS agent had it in for him!   It was a travesty of justice!

Perhaps.  If you believe his side of the story.   But there is likely another side to the story, and that side was not reported in the article.   Why not?  Well, a number of reasons.  Government Officials can't get involved in sensationalist "he said, she said" types of stories, for starters.  And of course, it makes a more compelling story if you can make the injustice seem more extreme.

An example of this, of course, is the "Innocent Man on Death Row" type story.  A man is convicted of gunning down six people, with plenty of witnesses and DNA evidence and the like.  20 years later, he is on death row, and an article appears in the paper saying he is innocent!  And if you read these one-sided articles, you might come away with the impression that he was.   After all, the evidence is "disputed" and whatnot.

In a way, it is like these conspiracy theories.   The folks putting up the idea that the pyramids were built by astronauts will put forth all the evidence supporting their theory (including just fabricated stuff) and then conveniently not present the other side of the story.   And people believe this.  My brother, back in the 1970's, read a book by Erich von Däniken that said that aliens built the pyramids and most of the great achievements of ancient man.  And after reading this one-sided book, he actually believed it.

Similarly, people read bullshit books about "The Bermuda Triangle" and believe there is some sort of mystical part of the world where ships disappear.  Or they go on a 9/11 "Truther" website and convince themselves that the 9/11 attacks were "an inside job."  Or people read book saying that the government is concealing Aliens in "Area-51" - and they believe it.

When you listen to one side of the story, you tend to believe just about anything.   And this is how people believe that Mitt Romney was a "jobs creator" at Bain Capital (something that his own party debunked in the Primaries) or that Barack Obama was born in Kenya.

Many folks have little in the way of real-world experiences, and thus have no counterweight to fantastic or bizarre stories.   The pyramids must have been built by aliens, they think, because the blocks are so huge, and only machinery can move big blocks of stone, right?   Or the 9/11 attacks must have been a controlled demolition because "fire can't melt steel!"   But as an Engineer, I can assure you that humans can move blocks of stone with simple rollers, ropes and levers.  And fire can indeed anneal steel until it no longer has its design strength, at which point it will bend like a pretzel. And the reason why the government won't comment about what goes on in Area-51 has less to do with aliens and more to do with top-secret aircraft and spacecraft development.

Similarly, this MSNBC story about Mortgage Fraud has some holes in it.  Living in Washington, I knew a lot of people who worked for government agencies - and worked for some myself.  All that high-tech crap they have in the movies is just that - special effects.   Most government workers have a cubicle and a computer, just like you do.  And they are all on quotas.  IRS agents are evaluated on how much they collect, over time.   They can't go off chasing trivial matters if there is not a lot of tax revenue to be had.

Similarly, an FBI agent isn't going to go after someone for "lying" on a mortgage application, unless something else is afoot.   So right off the bat there, that tells me there is something else afoot.  And likely this was some shenanigans that they could not charge him for - or that they cited him with a lesser crime as part of a plea agreement.  Or they wanted to go after someone else - a ringleader - and this was all they could get - and all they could get him for.  Remember, Al Capone was convicted only for tax evasion.  That does not mean he was innocent of other crimes - only that tax evasion was the only thing they could make stick.

But we will never know, as the FBI and the IRS will not comment on cases like this.  And the "investigative reporter" at MSNBC didn't bother to research the court records, but rather relied on one side of the story for his report.  And this is why you shouldn't rely on the media too heavily for information.  They want to sensationalize, as it sells newspapers, eyeballs, and click-through revenue.  Today more than ever, they want you to bite on a story, as a story unread means less revenue for the company.   Their advertisers pay based on number of views.  So a salacious headline and a "oh, woe is me!" victim story are the order of the day.   You go with what sells.  And Tot Mom and Justin Beiber sell, as does "Gagnam Style" - as these keywords keep cropping up on all the news sites.

And in a way, this is why our political system, with all its problems, works pretty well - if you bother to investigate both sides of the story.   When a politician makes Statement A, you can be sure another politician will call him out on it.   The only problem with this process is when people refuse to look into both sides of the story, and just believe whatever partisan diatribe they set forth on Fox News - which is not "fair and balanced" despite their trademark.

I get nasty comments and e-mails from partisans like that, particularly during the election.  "You are just a shill for Obama!" they say.   And while I support the President, I am not a supporter of any policy he has that makes no sense.  I look at both sides of the story and make a judgement.

So, for example, when Mitt Romney says "I know how to create jobs, as I did that in the private sector", I have to see proof of that.  In the law, that is called a "conclusory statement" - it states a conclusion without any argument to support it.  It would be like going into court and saying, "I'm innocent, your honor!" and expecting him to say "Oh, why didn't you say so earlier?  Case dismissed!"   That is a nice sentiment, but you have to prove it not just say it.

And in this instance, none other than Newt Gingrich and David Stockman (Reagan's Budget Director) beg to differ.  They showed exactly how Bain Capital operated - and operates - and how it stripped companies down, repackaged them and resold them.  No "jobs creation" whatsoever.  In fact, people got laid off and their pensions destroyed.  That is a pretty big whopper of a lie Romney told, and yet a lot of people believed it, because they didn't bother to investigate what really went on, but rather just listened to the conclusory statement.

So what was the Romney campaign's response to this?  "Uh, well, I wasn't working there at the time."   Working there - an interesting choice of words for someone who never took home a W-2 from Bain Capital, but was instead paid in Capital Gains.   And sorry, when you own a company, it is hard to claim you didn't know what was going on.   Oh, and the main thing - you didn't dispute the facts, just the timing.   This is nit-picking, not a real argument.

A real argument would have been to point to the legions of actual workers who were hired by Romney - and interview a few of them.   But they couldn't do that, because he actually laid people off.   And most folks didn't seem to notice this glaring omission.  I mean, this is a simple thing to check, right?  Just interview one guy who would say on camera that Romney gave him a job.  They couldn't do even that.

Unfortunately, most folks don't think very much.  They hear a story on the TeeVee and believe it.  After all, the television never lies - ever, ever.  That lease deal on a new Hyundai was so sweet!  And that frequent flyer miles credit card was a real bargain.   Right?

You have to look at both sides of the story.  And when the other side is not presented, you have to ask yourself why.   And you have to use your life-experiences and skepticism to fill in the blanks and think about what that other side could be.

Because when somethings sounds too-good-to-be-true, it likely is.   Whether it is a Presidential Candidate, a death-row inmate, a new car lease, a credit card offer, or a story in the newspaper about some "outrage" that is going on, chances are there is another side to the story.   And when you factor both sides in, things don't always seem so black-and-white.

Before I went to law school, I tended to be a raging true believer, willing to believe whatever was on the television that day.   It was only when I became a lawyer and started interacting with people that I realized that folks tend to twist things in their favor.   And oftentimes, people would call me up and say, "Gee, this invention is patentable, right? right?" - particularly during that "dot com" era when a green light from me would mean a million dollars in startup money.

Being skeptical isn't easy - and it isn't fun, either.   You are constantly popping people's balloons and trampling on their carefully planted flowerbeds of fantasy.   But living in reality is necessary for both an Engineer and a Lawyer, so I have no choice.   And for the average individual, living in reality is the best option, in terms of your own personal financial outcome.

Be skeptical.  Think about things from both angles.  Because usually there is a nugget of truth on both sides of an argument.  However, one side usually has more nuggets than the other, in most cases.   But you have to look at both sides in order to find out!
Newer Post Older Post Home