Real Mortgage Fraud - What is it? 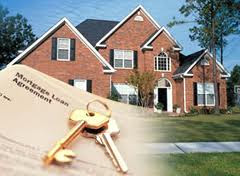 What is Mortgage Fraud?  Not what you think it is!

Another recent story on MSNBC provides less information that you need to tell what is going on.  In this story, they tell about a guy who was sent to jail for lying on a "liar's loan" application.

The story mischaracterizes what "Mortgage Fraud" is.  It is not just lying on a loan application.

Nor is it something than banks and lenders do, either.

Real Mortgage Fraud involves teams of people who buy houses than then sell them to a "straw man" buyer, who often uses a "liar's loan" to buy the house at an INFLATED PRICE - often double what the first buyer paid.

Example:  Joe Knuckles buys a house for $200,000.  He sells it to Jim Patsy for $500,000.  Jim is in on the deal, as is the mortgage broker, the closing attorney, and the appraiser.   They pocket $300,000.  Jim has the house, but can't afford to make even one payment.  But thanks to foreclosure laws, he can live in the house for a year or more (particularly if he declares bankruptcy) until they boot him out.
Meanwhile, Joe Knuckles buys two more houses.  He has more straw-men lined up, either associates of his, or people pressured into these deals.  Often, Joe is doing back-to-back closings on five or six houses a DAY.

Joe rakes in millions - tens of millions - of dollars this way.  And he is just an "innocent seller" of a property, so he can't be prosecuted.

Ahhhh. But the straw-man buyers can be nailed, and the Attorneys and appraisers and mortgage brokers as well.

Maybe this is what happened here.  Like most MSNBC articles, there is not enough information to really tell.

Usually the patsies are people who owe the mafia gambling debts.  This is a way of "busting out" their credit rating, which is preferable to busting their kneecaps.

But that is how real MORTGAGE FRAUD works.  Not many people know about it, though. I attended a legal seminar about it.  A lot of Attorneys in Georgia and Florida were disbarred over this.

I tried to explain this in an earlier post, but people couldn't follow the narrative.  The victims of Mortgage Fraud are not homeowners, but the banks.  Granted, we are all victimized by the runup in housing prices that this fraud caused, in many neighborhoods, such as in Atlanta.  And granted, we all lost money in the recession as a result.

Organized criminals are not funny, lovable characters, like on the Sopranos.  They cost us all, an awful lot of money.  And if you doubt this, ask yourself why taxes are so high in New York and New Jersey.
Newer Post Older Post Home