Did Subprime Loans to Minorities Cause the Real Estate Meltdown? (No) 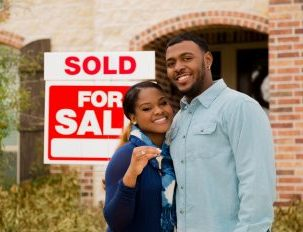 According to the GOP, these folks brought down the entire U.S. Housing market.
Talk about Black Power!
You don't suppose the GOP would be lying about this?

One of the narratives being pushed by the far-right was that the current economic crises was not caused by eight years of George Bush's deficit spending and a decade of unsustainable housing price increases (fueled by a lot of folks who thought they could 'buy and flip' mini-mansions for a profit).
No, no, it was all Obama's fault - or Bill Clinton's (take your pick, or both) and all those Minorities defaulting on loans they never should have gotten, through the Community Reinvestment Act.
When in doubt, it seems, blaming Black people is always a good tactic, as white folks never do nuthin' wrong - or at least that is what they want to hear.
Oh, those Black folks!  We freed them from the bonds of slavery and how do they pay us back?  By becoming Welfare Queens and then screwing up the housing market!  That's how!
Yea, that is just a little bit more than racist - it is scapegoating and race-baiting in its worst form, and it is plank #1 of the GOP party platform, which is enough to make one vomit.
What was the real story?  Well, as I noted before, the housing bubble had its roots years back - in the tattered remnants of the 1989 bubble.  But it was a lot of people - mostly white folks - who built and bought the mini-mansions and luxury condos that are now sitting empty in Las Vegas and Fort Lauderdale.
If poor minorities were involved at all, they were the ones who got in late to the game and overpaid for meager housing, got the worst loan deals, and have already been foreclosed upon, as they cannot afford to use lawyers and legal tactics to stay in their homes.
Which is not to say it never happens.  I attended a law conference recently, where an attorney from Rural Georgia taught us about the fine art of lien-stripping, and he used as one example, a young couple who were able to lien-strip their house, so they ended up owing only a fraction of the original mortgage, which they paid back on a principle-only five-year repayment plan.  So yea, some folks worked the system and came out ahead.  But they are in the minority, not the root cause, and not usually minorities.
And as I noted before, organized crime had a role in outright mortgage fraud - the buying and selling of houses in dummy "straw-man" transactions that netted huge profits for some criminals and got some  greedy attorneys disbarred.
But, by and large, the huge part of the problem was all of us who bought homes at these inflated prices and signed odious loan documents, convinced they were good deals, and we could "always refinance later" or "flip" the house and make a huge profit.  It was the greed of the masses, not some giveaway to minorities.
But again, complex stories don't sell to the populace.   You want a simple narrative, and one that puts the blame on the unseen "others" - and Black folks are a great whipping-boy (in the past, quite literally) for white folks to use.
From a recent MSNBC story:

Former Governor Romney, in every debate so far, [has] said something like, "Fannie Mae and Freddie Mac were a big part of why we have the housing crisis." But studies have shown that Fannie and Freddie were late to invest in subprime mortgages, following the lead of Wall Street firms that [he] never mentions. (Fact-check from The New York Times here and here.) The unspoken narrative in [his] comments, and those of the other candidates, panders inaccurately to those who want to believe that loans to unworthy minorities, driven by the Community Reinvestment Act, caused the financial crisis. In fact, most subprime loans were made by lenders who were not covered by the CRA, but who were driven by the need for profits to satisfy their Wall Street investors. [Is Romney]  trying to deflect blame from Wall Street?

Well, yea, duh.  Because it is a lot easier to deflect the blame than to accept it.  It wasn't the default credit swaps or the bundling of specious mortgages into investment blocks that caused trouble.  No, it was those darn Blacks - and government programs!  If only the government had stayed out of it!  We would all be better off!
This is not to say government is innocent, only that it is not the sole source of the blame.
And who likes this argument?  Well, folks who bought mini-mansions and lost their shirt - white folks - like to regale me with tales of the CRA and Bill Clinton, and "a young Senator named Barry Obama" who did all these misdeeds that caused the Real Estate meltdown.
It is a prime example of what I point out in this blog - externalizing.   People want to blame others for their troubles, rather than look inwardly at their own actions.  And when someone comes along and says, "Hey, it's not your fault!  It was the fault of others!" then people will buy into this, big-time.
"You'll never go broke telling people what they want to hear" - that is the real trademarked mantra of Fox News (not "fair and balanced").
Scapegoating minorities never works out well - for the minority in question, but also for the scapegoater.  Ask anyone in Germany how that worked out.
And funny thing - when economic times are tough, everyone wants to look for a scapegoat.  It seems that today, Blacks are in the cross-hairs, what with their CRA loans, Obamaphones, and Food Stamps, they are causing all the problems in the world.   And of course, they are "taking over" turning us into a nation of minorities (except of course, for the 78% white part).
Problem is, it isn't true.  If you bother to investigate these things, the claims fall apart rather quickly.  And you have to ask yourself why folks would lie about these things.   What exactly is it they are selling you?  And why are they distracting you with lies?
The answer is, of course, is that the folks selling these lies have one hand on your wallet.
Newer Post Older Post Home