The Real Meaning of Thanksgiving 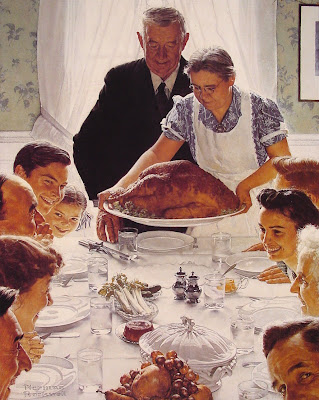 As with Christmas, the real meaning of Thanksgiving is not in the trappings.

Many people get depressed at this time of the year.  And maybe that is why we invented winter holidays - to do something to cheer ourselves up at a time of year when the skies seem dark all the time.  You wake up, it is dark.   You go to work and sit in an office all day.  You leave for home, and it is dark already!   You never see real sunlight for two or three months!  Some fun!  It is not hard to understand why people get depressed.

Thanksgiving has now morphed into the official starting-gun for Christmas.  But it was not always the case.  When the musical "Mame" came out, there was a catchy tune called, "It's beginning to look a lot like Christmas!" which was a song tinged with irony.  But regardless, it has become a Christmas classic, with the irony surgically removed.

One of those surgical operations was on the lyrics.  Originally, the one lyric read, "But, Auntie Mame!  It's only two weeks after Thanksgiving!" - in reference to getting into the holiday spirit.  In other words, when the musical was written, the idea of setting up your Christmas tree in mid-December was viewed as "too soon".

The lyric was changed, in later versions to "But Auntie Mame!  It's only two weeks before Thanksgiving!" and that sort of says it all.  Today, I guess the lyric would be "before Halloween" or "before Labor Day" or perhaps "4th of July".  Christmas has spilled over into adjacent holiday seasons.

No, it seems we have lost the meaning of Christmas, and the commercialization of it has washed over onto Thanksgiving, and we've ruined that holiday as well.

What do you think of, when you think of Thanksgiving?   Turkey?  Family?  Travelling?  Football Games?  Parades?  Black Friday Shopping?   These are the trappings of modern Thanksgiving, and they are all blatantly false.

Thanksgiving, as the name implies, is all about giving thanks (just as Christmas is a Mass celebrating the birth of Christ).   And just as Frosty the Snowman and Santa Claus have horned in on the Christmas gig, football games and parades and shopping have taken over Thanksgiving.

And that is one reason why I refuse to participate in the modern versions of either Thanksgiving or Christmas.

The traditional Thanksgiving has nothing to do with Pilgrims and Turkey, but was designated as a day of giving thanks - thinking about how much we have and how lucky we are.  But today, in America, this is not the case.  Most folks today are convinced, via the media and particularly Fox News, that they are disadvantaged and put-upon - that their lives are one horrific problem after another, usually caused by those unseen others who are taking all their money and making their lives miserable.

But this, of course, not the case.  If you are living in America as a homeless person you are likely wealthier than most of the population on the planet.  You have options for free food, free shelter, and job training, free clothes, and a social support network (never mind that many refuse to accept these offers).

If you are living "below the poverty line" in the USA, you likely own (or rent an apartment equipped with) a microwave oven, a refrigerator, a stove, an air conditioner, and also own a car.   And of course, you have a TeeVee and maybe even cable!  And one of those "Obamaphones" as well!  And likely you are overweight, as you consume more calories than you need.

You are hardly put upon.

If you make the median income in the United States - $51,000 a year, you likely own a home, two cars, and have a host of electronic toys, a flat-screen TeeVee and all the cable channels.  The fact that you also have a mound of credit card debt is a choice you made, not a preordained outcome, of course.

And likely, if you are reading this, your income is much higher than even that.  If you make $100,000 a year, which is not hard for a couple to do these days, you are likely in the top 1% of income for the planet.  And chances are, you have a house full of crap - all charged to credit cards.

What were you bitching about again?  Oh, right, a 3% tax increase that likely won't even apply to you.  That.

It is obscene, really, to whine and complain about how rotten things are, when you are at or near the top of the pyramid.

And that is what Thanksgiving is all about - to step back, reflect on how lucky you really are, and put your life in perspective.

Because no matter how much the media and the politicians get you riled up, chances are, your life isn't really all that bad.   If you are even a pound overweight, you have no right to complain about anything - not when others are going hungry in this world.  You have a calorie surplus.

That is the real message of Thanksgiving.  But not surprisingly, the commercial interests that dominate our culture have subverted it (and Christmas) to their advantage.  The real message of Thanksgiving is anti-consumerist, if you think about it.  If a person stops and thinks about how lucky they are in life, and how much "stuff" they already have, they may think, "Gee, chasing after the consumerist dream is a false value - I already own too much junk as it is.  I will be happy with what I have, rather than constantly wanting more!"

And if people start thinking that way, well, that is dangerous to the powers-that-be.

So Thanksgiving has morphed into a spending spree.  You must spend money on food, to begin with - and far too much of it.  We fell victim to one of these "free turkey" coupon deals.  Buy $60 worth of crap, and you get a "free" turkey.   Do you really think we got a "free" turkey?  Of course not.

For many folks, traveling is part of the bargain.  So the airlines rake in the dough, as people travel on the worst days of the year to go off to spend time with people they hate.   More spending money, not because you want to but because you feel obligated to.  It really is stupid, if you think about it.

After the food is served, everyone sits down to watch the TeeVee.  The Macy's day parade is one long advertisement for a retailer.  The football games are loaded with ads.

They really have us, don't they?   They managed to take a simple holiday and turn it into an excuse to empty your wallet.

But it need not be that way.   You can spend Thanksgiving being thankful for what you have, and stop and reflect on why you worry about what you don't have - and why that bothers you.  You can prepare a simple meal and maybe share it with friends.  But you don't need to fly across the country just to spend the weekend with relatives.

It is within your power to make Thanksgiving into what you want it to be.  Few people realize this, unfortunately.
Newer Post Older Post Home