Could Romney Have Won It? (Open Primaries) 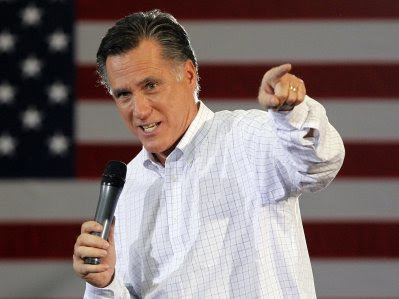 Could Romney have won the election?  I think so, but the primary process derailed him.

And this is one reason why the crop of candidates for the GOP nomination was a motley collection of extremists and dreamers.   How else could Newt Gingrich even run?

Romney was pilloried in the primaries as being "too Liberal" as he was governor of blue-State Massachusetts, and signed into law, the "RomneyCare" act which was a blueprint for "ObamaCare".  Those on the right painted him as "Obama Lite".   And among religious conservatives, his Mormon credentials were always suspect.

To counter this, Romney went hard-right, appearing on Christian (not the real kind, the hatey-kind) talk shows, and saying things that he would later renounce a few months later.    He had to do this, in order to win the primary.  And in that regard, it is remarkable that the GOP did nominate someone who was, in many respects, moderate - at least compared to his competitors in the primaries.

And once the primaries were won, he could "etch-a-sketch" his positions, or so he thought.   In the general election, and particularly in the debates, his positions became alarmingly moderate - a stark contrast to his earlier positions.

This placed him in a precarious position.  The "base" (in every sense of the word) of the GOP would not tolerate any softening of stances on Gay Marriage, Abortion, or tax increases.   Yet, the general public overwhelmingly feels otherwise.   Moreover, his shifts in policies ended up providing fuel to the opposition - making it easy to point out how inconsistent and vague his policy positions were.   In retrospect, we realize his "sketchy" plans were sketchy on purpose, as saying what he would really have to do (including raising taxes) would have been a deathknell to his campaign.

Republicans are so caught up on signing Grover Norquist pledges and saying "never, ever" when they should be saying "whatever it takes".  This hobbles them, as they end up with no maneuvering room down the road, when real compromises have to be made.   And as a result, we end up with a Congress that does nothing - can do nothing - as they will lose re-election by appearing to be even the tiniest bit moderate.

Blame it on primaries - closed primaries.

But of course, Democrats have the same primary system in many States - why hasn't this been a problem for them?   To some extent it has - and that is perhaps one reason Hillary Clinton's campaign was derailed.   Thinking herself the "presumptive nominee" she pandered to the far left with ill-conceived ideas like "baby bonds" and Federal funding for the Woodstock Museum.

But Democrats have less of a problem than the Republicans, as people are the far-left, while certifiably insane, still are sane enough to realize - in most instances - that voting for a moderate Democrat (which Obama is) is far better than voting for any Republican.

On the GOP side, however, it is "my way or the highway" - and unless you sign all the pledges and toe the party line, you will not get nominated, and if nominated, you will not get the "base" to vote for you.  So Republicans feel they have to pander this minority of voters whose odious view turn off the majority.

How can this be fixed?  Open Primaries.   When everyone has a say in who the party nominates, the nominees tend to be more centrist, moderate, and reasonable in their positions.   Candidates can say what they really believe in - and win - even if it does not appeal to the far-right "base" of the party.

Here in Georgia, we have open primaries - so far.   And in our County, the primary is the election.   When I voted in the primary this summer, I foolishly chose the "Democratic" ballot, which had few candidates on it at all.   Coming from the North, I didn't realize that Georgia is a one-party State, and that the big decision occurs in July, not November.

The ballot I cast yesterday was essentially worthless.   Georgia is a "Red State" and went for Romney in a big way.  My vote for Obama was meaningless.

And the rest of the ballot?   The candidates were all Republican or "write-in" - the Democratic Party failed to even field candidates in this State.  Why is this?  Well, the State is conservative, to be sure.  But not as conservative as you would think.    Since the primaries are "open" to all, the parties (or in this instance, party) can sample opinion from everyone, not just the far-right.

And this may explain why the GOP maintains control of the House, while losing the Senate and the Presidency.   In many States with open primaries, the GOP does well, as they can appeal to moderates in that State - without having to sign pledges to the far-right, or associate themselves with odious political factions.   And this is why, it appears, that the so-called "Tea Party" may lose as many as 11 seats in the House.  It's "my way or the highway" and "No, never, not ever!" tactics have soured like old milk in a powerless refrigerator in Staten Island.

The "Grand Old Party" needs to rebuild itself as something other than a collection of gun-nuts, racists, fundamentalist (hatey-kind) Christians, Abortion Doctor shooters, and other assorted crackpots, gold bugs, conspiracy theorists, and the like.   Because, that assortment of nuts is past its sell-by date, and is not enough of a majority to win an election - even when you throw Billions of dollars of slush money from Casino and PayDay Loan owners at PAC ads.

And that is the second half of the story - a party that has basically sold out to the highest bidder.   And that was readily apparent to most people going to the polls yesterday.
Newer Post Older Post Home