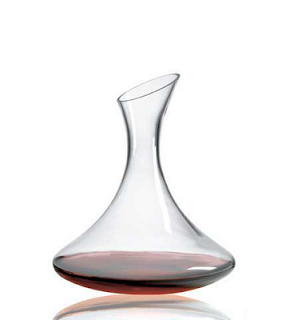 Decanting wine can improve its palatability


Wine is largely misunderstood in America, and yet we do drink a lot of it.   Many folks claim not to like wine, or they profess confusion at the many types, brands, and labels, as well as vintages.   They look at a wine list and are intimidated.  After all, in a James Bond movie, Bond can tell a Rothschild '53 from a '54, with just a whiff of the cork.

Well, relax.  Like so much else in a Bond movie, it is just a lot of made-up crap.   No, you can't die from being painted with gold paint.  And no, Oddjob can't crush a 6,000-lb Lincoln Continental into a three-foot cube and then put it in the back of a Ford Falcon Ranchero (load capacity, 500 lbs).   In fact, much of the plot of Bond movies makes no sense - and if you start thinking about the plot too much, you'll just ruin the fun.  Why would you try to beat the bad guy at Baccarat in the casino, when you could just put a bullet in his head in the parking lot?  Because there would be no movie, that's why.

Most of the wine consumed in the world is not vintage wine that is laid down and aged in private cellars.  Rather, the bulk of wine consumed is table wine which is meant to be drunk (in both senses of the word) within a year or two of its production.   And yes, even a lot of pretentious wines from California and France are really table wines, not great vintages.

But that still leaves a problem.   When you go to any wine store, there are hundreds, if not thousands of wines you can select from.   For many folks, this is very intimidating, as they are used to buying beer or liquor, based on the availability of less than a dozen brands.   And some folks take this approach to wine as well - buying a "brand name" mass-produced table wine that they like.  And there is nothing wrong with that, of course, except that most of the mass-produced wines are a little on the sweet side, if not a lot.

Many folks are afraid of risk, and the risk of buying a bottle of unknown wine, even for $10 or less, scares them to death.   Suppose the wine is not to their liking?  They've gone and wasted $10!  And suppose they do like the wine?  Odds are, it won't be available when they return to the store - which is often the case.

On the other hand, this is sort of the fun aspect of wine - finding something you like in an obscure wine shop, or trying a new variety or region and deciding you like it.   A pleasant surprise is a wonderful thing, and the risks of getting a "dud" are really not all that great.

But once in a while, you get a bottle that is, well, perhaps a little "off".   And this happened to me with a batch of Rio Seco Malbec the other day.  A remarkably inexpensive wine from Argentina, it can be had for as little as $4 a bottle.   We had bought a few bottles previously and it was a very servicable table wine.

But this latest batch, well, was different.  At first I though the wine might have corked - a condition that occurs when the cork fails, allowing too much oxygen in.  But it did not have that "wet carboard" taste or smell, but rather was a bit bitter almost.  Granted, a Malbec can be a pretty intense wine, but this seemed a little too intense and a little too acidic.

What to do?  Throw away a half-case of wine?   There are other options.

Such wine can be used, of course, for cooking.  And we use a lot in sauces and the like, as well as white wine in steaming seafood.

But another option is to decant the wine and see how a little more oxygenation affects the taste.  Poured into a decanter such as that shown above, swirled around for a bit and then allowed to rest, the wine changed flavor almost immediately.   After a few minutes it was far more palatable, and after an hour, quite nice.

Wine, they say, is like a living thing.  It does change over time, even in the bottle.   And perhaps this batch we bought was damaged by heat or something - or was made from different grapes of a different vintage.  Who knows?

But before you throw out a bottle of wine, try decanting it first.  You'd be surprised how it can change the wine.
Newer Post Older Post Home