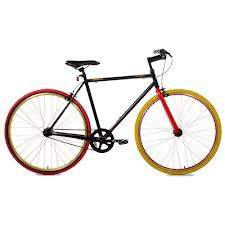 Wildly impractical and totally trendy, fixies are now available at Wal-Mart.   Fixies are so "over!"


What is a "fixie"?  If you are over 40, you probably have no idea.  Fixies are bicycles that are descended from board-track racers of an earlier Century.  They have no gears, no brakes, and no freewheel.  If you want to slow down, you have to pedal slower.  Real fun when going down a steep hill!

They have become trendy with a certain set of people who place style over substance, as parodied effectively on an episode of Portlandia.

Your typical modern "fixie" is characterized not only by the fixed gearset (often accompanied by a freewheel set, on a reversible rear wheel) but also by mismatched and wild tire colors, as well as jarring florescent frame colors and usually straight, upright handlebars.  Many modern trendy "fixies" are almost effeminate in nature, with shocking pink or other "little girl bicycle" accessories.

The folks who ride "fixies" of course, are putting style over substance.   They are not practical bicycles, by any stretch of the imagination.   While they may work in somewhat flat environs, imagine trying to ride a fixie down the hills of San Francisco.   And I am sure some do.  And they either have brass balls or no brains - and perhaps the two are connected.

But if you haven't heard of "fixies" just yet (although they were mentioned in a wall poster on Season 3 of Glee - "Fixie Club, no brakes, are you in?") they are already "over" as they are now being sold at Wal-Mart.

Yes Wal- Mart.  I went there today to get some brake cleaner and $1.28 double-check crackers (Triscuit knock-offs, for 1/3 the price, and less salt), as I have disassembled the entire front suspension of the X5 and remove the axle half-shafts.  It is a mess.  I needed brake cleaner.

While walking by the bicycle display, I was checking to see if they had any more of those huge 32" tire bicycles (finally a bicycle built for someone my size!).  They were sold out, but what was shocking, was that they had fixies in stock.

Fixies.   At Wal-Mart.  Who woulda thunk it?

Of course, the bicycle business is all about style.  Really.   Back in the 1960's we all rode "Sting-Ray" bicycles, which were hardly rideable and were horrific, in terms of efficiency (they have re-emerged in recent years as Latino "low rider" bikes, and as a whole new generation of unridable motorcyle-like bikes).

(Our ancestors, of course, in the 1950's, rode balloon-tire single-speed coaster-brake monstrosities that weighted in at 70 pounds or more, and were laden with chrome, lights, and huge motorcycle-like fenders.)

In the 1970's we all went for the 10-speed, with its "rams head" handlebars which caused you to bend over double to reach the brakes.   More efficient, but less practical.  And those thin wheels would bend when you looked at them.

In the 1980's, the Mountain bike took off.  Finally, a bicycle that would not bend a rim when you jumped the curb with it!  But pretty soon, the serious off-road cycle stuff started going mainstream, including incredibly short wheelbases and short frames.   A good trend, gone awry.

The BMX craze took off at about the same time.  Great for doing stunts on a skateboard ramp, but sucky for getting a six-pack at the 7-11.  Ever seen anyone (particularly an adult) try to ride a BMX bike as transportation?  It is just sad.

The "Beach Bike" craze took off in the early 2000's, and it provided us with at least comfortable and easy-to-ride bicycles with wide tires and strong frames - even if they weighed in at 75 lbs (they sell these at Wal-Mart, too, complete with "woody" trim!).

It seems that the bicycle, as basic transportation, has yet to catch on.  But as a style item, is a big success.

So, I guess, it was inevitable that Wal-Mart would have fixies.  And we have to look to our friends West to see what the "next big thing" will be.

But it is funny.   Wal-Mart not only had fixies, but beach bikes, mountain bikes, BMW bikes, and even a sting-ray kind of bike.  And most started at $99.99.