For Sale - But Not For Sale 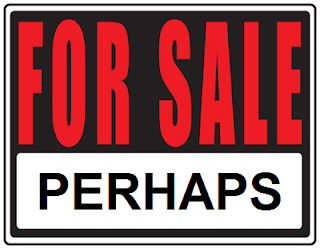 When something is for sale, but not for sale, walk away as fast as possible.


If you are looking to buy a secondhand car or boat or RV, sometimes you run across the fellow who has an item "for sale but not for sale."   It is a good idea to run away from such folks, as getting involved with them is a bad economic proposition and usually a waste of your time.

What do I mean by this?  These are people who are selling a car, but put an unrealistic price on it (Blue Book retail prices or higher) or who say things like, "I don't need to sell it, so no low-ball offers!" or some such nonsense.

If you are really selling an item, then you need to sell it, period.  And yet there are a lot of people out there who will waste your time with what I call constipated commerce.  And I have written about this before - the fellow who has a boat for sale for nearly a decade, on his front lawn.   Anything "for sale" for more than a year, is not really for sale.

Why to people do this?  The motivations are various, and all bad.  And you can't strike a reasonable bargain with such folks, much less "win" with them, so just walk away from such transactions.  In fact, run away as fast as possible.

There are at least three types of "for sale but not for sale" people I am aware of:

1.  Hoarders - who want validation that their goods are valuable and desirable.  These folks will list some of their hoarded possessions for sale on Craigslist and then be remarkably slow and vague in getting back to you if you contact them.  You ask them basic questions like the price, location, and condition - as well as when you can stop by to see or buy the item - and they answer only one of the four questions.

So, four or five e-mails later, you have only a vague idea of the price and no indication of when you can come look at it or buy it.   And the reason for this is, they really don't want to sell it.  They just get off on the idea that someone else covets a possession that they own.

This validates their hoarding instincts, by giving them the impression that their piles of garbage are, in fact, rare and valuable collectibles that people desperately want.  And why sell them, if they are so valuable?

Hoarding is a form of mental illness.  Never deal with mentally ill people.  If you e-mail someone about an item for sale, and they don't answer back promptly, and don't provide you with a clear price, condition, and when/where you can come buy it, just walk away.  The item is not really for sale.

2.  Power-Shifters - who want someone so "desperate" for a consumer good that they will overpay for it.  And such desperate people are not hard to find, either.  I wrote about power-shifters before.  Most are professionals - salespeople and the like who use power games to manipulate people.

But some amateurs want to get into the game, and when they put their car up for sale, the try to power-shift the transaction so that you appear to be the one who desperately wants the product, as opposed to the person desperately wanting to unload it.

I looked at a used BMW wagon on Craigslist the other day.  It was a nice looking car, but for some reason, while the seller put up all sorts of information, the one key piece - mileage - was missing.  Any transaction entered into predicated on a lie is only going to go downhill from there.

So I e-mailed him and asked him, and he responded that it had 220,000 miles on it, which was far above average and near end-of-design-life for a BMW.   And he was asking $2000 over book value for the car as well.   Time to walk away from an unrealistic dreamer - right?

Well he e-mails back that "several people are interested in it!" and that I had better "jump on it now" as the first person with "cash money" (is there any other kind?) will get the car.

I just replied that it sounds like a good deal - for someone else.   And perhaps someone else jumped on the deal - believing this guy's nonsense that the car was worth over book value.   But myself, I was not inclined to pay extra.


3.  The "I'll Get My Price" people -  These are folks who think that for some reason, they are entitled to a particular price on a fungible consumer good, despite the fact that the book value for the item is far lower.  And I've wasted my time with such folks in the past.

We went to look at a Wanderlodge - a classic RV that was built by BlueBird coaches here in Georgia.  Being built on a school bus chassis, they were all-steel.   Not a problem, unless you park it in Florida near the ocean for a few years.

This fellow wanted $20,000 for the coach, on the grounds that it had a rebuilt engine and new tires.  But the real story was that the reason it had these items was that it had sat in the salt air for so long that the engine seized and the tires dry-rotted.  The body and even the frame were a mess of un-restorable pack corrosion - thick, flaky rust that is impossible to fix.

The coach was good only for parts at this point - yanking the engine and the new tires, if they had not already rotted in the salt air.

The perpetual sailboat-for-sale people in Lansing, New York won't budge a dollar on "their price" even though the boat has been for sale for nearly seven years.  (I went up there this summer, and yes, it is still there, and they still mow around it).  Despite the fact that any piece of depreciating equipment drops in value over time, they have not adjusted their price.   And the fact it remains unsold would tell you one thing and one thing only - that it is overpriced.

"The right person will come along..." they say.  Maybe.  Maybe a fool will buy it.   But in the meantime, they have mowed around it for seven years - enough time to double your money in the stock market.

Price is king.  Everything else is secondary.   No matter what the item is for sale, it can be sold - and will be sold - if the price is adjusted accordingly.  Nothing else really matters.

In Edith Lank's Real Estate column, people regularly write in, asking how they can get their home to sell, when it has been sitting on the market for so long.  And in every case, she has the same advice - lower the price.

If a house has a bad view, a less-than-optimal location, bad carpet, an old furnace, or whatever that is preventing it from selling, you can always make it go away by lowering the price.   People won't pay "top dollar" for a home, unless it is in top condition and in a good location.  However, people will snap up a bargain and are willing to live with some inconveniences, if the price is right.

Nevertheless, there are folks out there who don't get it.  They see a neighbor's house selling for $500,000 and expect their house will be equally as valuable.  But their house doesn't have the same view, the extra bath, and the two-car garage.  And the overall condition is worse.   This doesn't mean the house is worthless, only that it is worth less.

Alas, the dreamers, the power-shifters, the hoarders, and the "get my price" people never seem to understand this.   And as a result they waste your time and everyone else's.

And the worst thing you can do, of course, is to try to buy something from one of these time-wasters.  You will end up paying far too much - and usually end up with a piece of crap.

UPDATE (2018):  If you see an ad for a car, boat, or whatever, that says, "no tire kickers!" or "no dreamers!" or "serious offers only!" odds are, you are wasting your time contacting them.   Odds are they are one of the three above (hoarder, power-shifter, get-my-price) and they have been frustrated in the past by people offering market value for the item, instead of the seller's inflated price.   Needless to say, any ad that says "call for price!" or has no price listed, is something that is not really for sale.

One thing I love about eBay - to either buy or sell something - is that it is no bullshit.   You are selling your car and it will be gone in seven days.  Or you are buying something and it is actually for sale.  Craigslist and cars parked by the side of the road often sit unsold for months at a time.
Newer Post Older Post Home