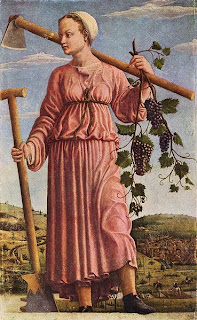 A muse may inspire you - if you find it.

Many people, it seems, never find their muse.  And this is sad.  I see a lot of young people and when you ask them what they want to do with life, they mumble, "dunno".

What causes this death of creativity?  It is hard to imagine that someone could start out life and have no clue what they want to do with it.

I think, though, a number of factors may be a work.


1.  Television:  Watching television sucks the life and ambition out of you.  On television, the message is clear:  Everyone is a STAR and you aren't shit.  They reinforce this message periodically by allowing "one of us ordinary folks" to be on TeeVee, where we, of course, act like total rubes.   The message is clear:  Leave it to the "experts" and the "superstars" and don't bother trying, just be a passive consumer.

While this is a good way to harvest money from Mr. & Mrs. Average American, it is a horrible normative cue for young people to take away.  If you fall for this, you end up believing that nothing you can do in life will measure up to the "experts" and "superstars" on TeeVee.  And this is likely true - there can be only so many people on TeeVee, and they tend to get the most talented folks (although not all the time).

But that does not mean you lack talents at all.  Moreover, many of us have talents that are not ready for prime time.

The television tells you it knows-all and sees-all, and it reinforces passivity in human beings.  The moment you shut it off your real life begins.

Sadly, many folks never do.   If you watch TeeVee, you are not living life, you are watching it.


2.  Pot: Smoking Pot sucks the life and ambition out of you.  I wrote before how it induces a sense of statsis in people.  The pot smoker will stay at a crummy job, until fired, a bad marriage, until divorced, his parents' basement, until thrown out.   It may be relaxing and "fun" - for a while - but long-term, it keeps you as a kid for a while longer, which of course is the point for most users.

So the pot-smoker does another bong hit and says, "Gee, I don't know what I want to do with my life."  Trying hard things seems, well, hard.   I know that I never dreamed I would be a lawyer, when I was smoking pot - and being an Engineer seemed pretty far-fetched at one point as well.   And that is why pot-smokers gravitate toward shitty, minimum-wage slacker jobs.  There is no fear of failure there, and if you do fail, well, it was a shitty job anyway.

And I see this pattern all the time among po-theads.  They try less hard, and as a result, succeed less.  And this is sad, as they have real talents they can use, but their talents end up going to "waste" quite literally.


3. Disconnect:  It is hard, as a young person, to see the connection between something as obtuse as schoolwork and "real life" in the "real world".  And this is one reason why I am glad I was in a co-op program at GM, and later worked my way through college at Carrier.   When I took thermodynamics for the third time, I really understood it - not from a textbook, but from working in the lab at the ultimate in "applied thermodynamics."  To most of the other kids in school, the material was just dry equations, not real machines that they had worked on and sweated over.

High School, in terms of education, is basically worthless.   You might have a few good courses, but most of it is study hall and lunch and gym class.   If you are lucky, you might have a good art teacher, if they haven't cancelled all the art classes in favor of football.  And maybe you can learn something about computers, literature, some math and science - and for God's sake, learn how to type!

But few do, and often College is the place where they realize how crappy their education was.  But college often is no better.   Schools that tout their rock-climbing walls are not providing a real education to students, but just perpetuating the disconnect.

What do I mean by disconnect?  Well, we have so much wealth in our society, and as a kid, you have earned none of it.  Your typical college kid is living on money provided by Mom and Dad and Student Loans, and most of what he has in life are things handed to him.  A few years of after-school jobs is not the same thing as a career.   So you have all this nice shit, but have not earned any of it.  And it seems scary and you begin to think that maybe you ever will.

And some kids react to this mental disconnect by assuming that they are entitled to all this nice shit and then act shocked when they graduate and the bills come due.

And maybe that is why, when a young man gets his first paycheck, the first thing he does is run off to the new car dealer to buy a shitty econobox that is all the rage with his age group.  It is a means of connecting - between earning and having.  The chance to say, "this is something I bought, on my own, and without my parent's help!"   Unfortunately, many of them end up asking Mom and Dad to co-sign the loan, which sort of defeats the whole point.

It isn't easy, to be sure.  And perhaps my experience has some clues.  I started working early on in life, precisely because I was sick of being dependent on others for money.    I realized that other people could be quite undependable, and relying on them to support me was dicey at best.   Other kids were not so motivated.

Working gave me a different perspective about money and my own self-esteem.  As a returning adult student at college, the contrast between myself and my classmates was staggering.  I owned my own home and my own car - that I had paid for myself.  And I had a job, or actually several.   The kids in the dorms had money and things, but they were all gifts from their parents.  They had yet to prove themselves in life, and thus could not make the connection between their own self-esteem and their own self-worth.

For example, one friend of mine never worked any jobs after school, or even during the summers when he was home from college.   Perhaps he lacked the confidence - and that lack of confidence bootstrapped itself in to less and less self-confidence.   And pretty soon, he was smoking a lot of pot, which meant that even when he tried to find a job, he was fired within a week or so - causing the low-self-esteem engine to chug on and on.

Did he have a muse?  Of course he did.  He just never embraced it.   He was a talented guy - smart, clever, and could work well with his hands.  He got good grades in school, particularly in math and science.   But he dropped his interest in those courses early on, and never really found his way after that.

He had a muse, but he couldn't find it.   And thinking he had no skills or talents, he let depression and low-self-esteem take over, with the end result, well, he ended up a very unhappy man.

Everyone has a skill or talent, large or small.  Not everyone can be a rocket scientist or a superstar, but that doesn't mean we are utterly worthless, either.  Find your muse - and nourish it!
Newer Post Older Post Home