Do You Need a Pest Control Service? Maybe. 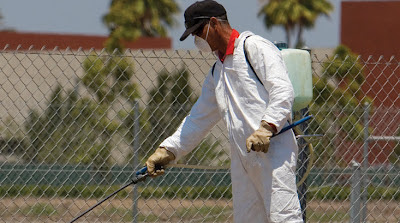 Do you need a pest control service?


Living in the South, pest control is not an option.  The entire sunbelt economy is, in a way, artificial, and hinges on two pieces of modern technology:  Air Conditioning and Pest Control.

Until the advent of Air Conditioning, no one lived down here except slaves and rednecks.   The South was a sparsely populated mostly agrarian society, backward in every respect.  Today, it is booming with factories and housing developments, and the population has skyrocketed since the 1960's - when cheap Air Conditioning became widely available.

In the North, the annual winter freezes tend to keep bug populations in control, for the most part.  However, down South, if you don't do something about the bugs, they populate - and populate, and populate - until you have a real bug problem.

In the tenements of the North, they have what are called "Cockroaches" which are disgusting little vermin that never seem to go away.   In the South, they have a similar, if not identical bug, called a "Palmetto Bug" which sounds so much more charming.  Pass the Mint Julips, please.

But they are basically roaches, and they will take over your house if you let them.   So unfortunately, one must resort to chemical weapons to keep them at bay.

A pest control service is one way to deal with this.  For a nominal quarterly fee, from $50 to $85, they come out and spray around inside your house, usually around the baseboards, and then spread some chemicals outside as well.

Does it work?  Well, yes.   A few days after they spray, you will see a few dead "Palmetto Bugs" emerge from the baseboards and lie on their backs and die slowly.    They were there all along, the spaying brings them out.

But, you can also buy a gallon jug of insecticide with a sprayer and spray yourself.   We did this recently, and the effect was about the same.  Two days later, bugs show up and die.

So, we are thinking of dumping our pest control service, and "doing it ourselves" instead.  Since we are no longer doing the "snowbird" thing, there is no need to have someone come and spray while we are away.

Termites bear special mention.    Our $85 fee does not include termite treatments.  And in fact, no one does termite treatments anymore.   In the old days, they would inject Chloridane into the soil surrounding your house.   Pest Control people tell me that these treatments can last years, if not decades.   Since then, Choloridane has been outlawed, and the idea of using chemicals as a preventative measure for termites is no longer practiced.

Instead, they put these termite traps or baits in the ground.  Basically, they are a plastic cup with some tasty wood in it.  Once a month, or quarter, the termite guy comes around and checks the traps to see if any termites are in them.   Then, and only then, can they spray for termites. 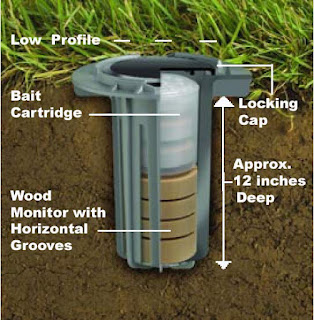 
We had these traps in Virginia, and I am not sure it wasn't just a lot of hooey and money down the toilet, frankly.  The termite guy wouldn't even inspect them, half the time (if you didn't watch him like a hawk).  I think they realized they were a bit of hokum as well.

Thus, preventing termites is a little more tricky these days.  You can't result to chemical weapons unless they have been sighted.   Prophylactic spraying is no longer allowed.  (UPDATE:  We were able to get our house treated for termites when we told the company that a contractor saw a flying termite while working on the house.   They can't spray as a prophylactic, but if you claim to have seen the buggers, they will spray.  It ain't cheap and may involve drilling into the foundation or concrete decking.)

And people are scared of termites, as if they do get into your house, they can cause a lot of damage.  And since it is not a "sudden" catastrophe, generally it is not covered by your homeowner's insurance.

However, we've seen some examples of termite damage on houses (having been in the Real Estate Business) and frankly, the idea that they will eat your whole house down is a bit far-fetched.   In one case, they ate into the framework surrounding the garage door of a home that a friend had for sale.   The fix was simple.   They sprayed the house for termites (and may have tented as well) and then had a local carpenter come in and cut some new pieces of wood for the frame around the garage door, which he did in about a day. 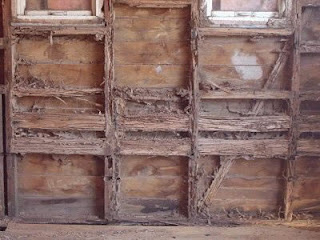 This termite damage is very extensive and looks horrific.   But bear in mind that a carpenter could re-frame this wall in less than a half a day, at most.


Some people freak out about termites and say things like, "The bank will never loan money on a house that has had termites!" or "You have to disclose this to the buyers and you will never sell your house as a result!"   But both notions are generally false.

Banks may require a termite inspection and will deny a loan on a house with an active termite problem.   But once the problem is fixed (as was done in the example above, which was a house belonging to a friend of ours) there is no problem getting a mortgage.

Similarly, an existing termite condition is a known defect that needs to be disclosed to a buyer.   But if you had termites five years ago, had the house fumigated and the damaged wood replaced, well, that is no more a material "defect" that say, having a tree limb go through your front window five years ago, once the window has been fixed.

But of course, consult your local laws and rules and Real Estate Agent, to be sure.   In most cases, a former defect, that has been cured, is no longer considered a defect.

But all that being said, it is worth spending hundreds of dollars a year on termite bait traps?   My neighbors both have them, and they are about halfway between our houses.   I pretty much figure that if I have a termite problem, it will show up on their traps.  I get a free ride.

I guess the main thing is, you can toss a lot of money away worrying about things, or just take some chances and not worry as much.   The horrific outcomes rarely happen.  And if they do, most of the time they are not as horrific as people make them out to be.

And the people who predict horrific outcomes are usually in the termite business.  And we can expect a flame comment from them in 3... 2.... 1.... !

UPDATE:  We found a cheaper pest control service.  That is always option #2!