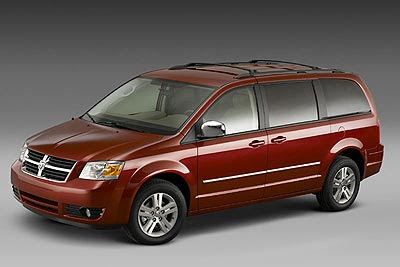 Minivans are cool - but saying that you like them isn't cool.

Probably one of the best automotive designs of the last 30 years was the minivan.   No, really.  In terms of space efficiency, packaging, features, fuel economy, and safety, the mini-van has it hands down, over other forms of transportation.

A reader recently wrote me, telling me how he planned on starting a family.  And I thought, "Cool, he gets to buy a mini-van!"   But of course, I did not say that to him, as he would have thought I was weird.

Why do I think minivans are cool?  Well, to begin with, they haul a lot of people and have a lot of interior room.   A basic minivan has more usable room in it than a Ford Expedition.   I rented an Expedition once, after requesting a minivan (they were sold out, which tells you something) and that damn Expedition could barely carry four adults and two children - and their gear.  We had to put a rocket-box on the roof, and it was hard to reach.  And the gas mileage was atrocious.  And it was poorly made.  Expeditions suck, really, unless you are towing a 28' boat or something.

The minivan gives you more room, but in a smaller vehicle - one that will fit in your garage and doesn't suck gas with two straws.

And then there are the interior features.  The minivan market segment is competitive, so the makers are lavishing features on these boxes.  You can get entire entertainment centers in these things, so the kiddies can watch their Disney movies, while you zone out to NPR or whatever.  And then there are all the cupholders, cubbies, storage bins, and the like, some of them hidden in the floor.

Speaking of floor, some of these things have seats that fold up and go into the floor.  How cool is that?  and no, your SUV can't do that, as it is physically impossible.

And they have electronic doors that open and close remotely, and well, just about any toy you can imagine and then some.   Some even have the child seats built-in, so they pop out of the regular seat.  That, I thought, was a cool feature - no more lugging those huge plastic baby-buckets around!

And minivans are cheap, too!   You can buy them for next-to-nothing, even brand new.   They are so disparaged by the status-seeking soccer mommies in their lumbering SUVs (are there any other kind?) that while the SUV might have a premium price markup, the minivan is usually on sale.

And chances are, that "SUV" is just a car chassis with an SUV body on it - with less interior room and crappier gas mileage.  Let's face it, you aren't going "offroad" in a Chevy Traverse or Honda CRV anytime soon.

So why don't I buy a minivan?  Well, I already have a working car, and there is no need to trade-in. It would be a waste of money at this point.  And minivans generally don't have great tow ratings.  And since I don't have a brood to haul around, I don't need one.  When the time comes to buy another car, I will probably downsize to a small sedan or wagon or coupe.

But if you have a family and are thinking, "Gee, should we get an SUV or a Minivan?" I would say "Minivans!  They rock!"

UPDATE January 8, 2013:  We rented a Dodge Grand Caravan for a trip to Atlanta for four people.  It gets an average of 19.7 mpg and over 20 mpg on the highway.  The seats fold into the floor and it is well optioned, including dual electric doors and tailgate.  And there is no shortage of room.

Downsides?  The plastic on the dash is a bit cheesy, and while it accelerates well, the brakes are not what I am used to, coming from a BMW.  But it does have a six-speed automatic and dual-zone and rear A/C.

Used, you can buy these pretty well optioned with about 20-30K miles from the rental car company for $17,000, which is pretty cheap.

There are worst things you could drive.  Most SUVs cost more, use more gas, and have far less creature comforts and interior space.