What Ever Happened to the Hippies? 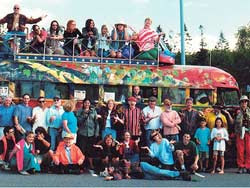 What ever happened to the Hippie Movement?  Like so much else, it collapsed under its own weight.


When I was a kid, the hippie movement was big.  And I mean big.  In the years before disco, dressing like, acting like, and thinking like, a  hippie, was a big deal.   Sure, not everyone did it, just as not everyone dressed up like John Travolta and did the Disco Duck, just a few years later.   But it was a major social and fashion trend, of the time.

Like so many "movements", there were many hard-core followers, and then a lot of people who just went along for the ride.  And it certainly looked like a fun ride at the time - lots of sex, drugs, music, and good times, with no real work or duties to perform.   We would all live together in peace and harmony, we were told, and the need for material possessions and money would just fade away.

It is hard to believe now that anyone actually thought this.  But some people were serious about it, at the time.  And many more of us were camp-followers, willing to adopt the dress and lifestyle, particularly the drugs, sex, and rock-and-roll part.  But most folks quickly realized it was a dead-end, in terms of a "lifestyle" or political statement, or whatever.  The hippie communes quickly fell apart, as people living together "in peace and harmony" quickly realized that all those messy materialism things would still come to bear, even in a hippie commune.   Some folks ended up doing all the work, or contributing all the money, and pretty quickly, they realized they were getting a raw deal, and left.

When I was a kid growing up, my older siblings were caught up in this movement, pretty much big-time.  Yea, they went to Woodstock (it rained, and my Dad found their "stash" before they left, so they were pretty "straight" the whole time.  It was a "bummer" so they left).  They grew their hair long and dressed in work shirts and torn blue jeans and work "shitkicker" boots.   And they smoked a lot of pot and carried around Chairman Mao's "little red book".   My brother would argue with my Dad that Communism was a better deal that what we were getting in America.  No, he was not a particularly bright fellow, I'm afraid.

By the mid 1970's, most folks started drifting away from the hippie movement.  Perhaps the whole Charles Manson thing creeped people out a bit - as well as Jonestown.   Like so many of the communes and movements of the time, many of these young people basically camped out and followed a Guru of one sort of another, trading free-thought for a small totalitarianism.   My brother followed one such dude, and he lived in an unheated barn in Vermont and basically worked as a slave for the Guru.   I went to visit him for a week once, living in a tent and wearing the same white robes they all wore.   Every morning they would ring a big bell, and we would all assemble in the barn and hear the pronouncements from the great Guru.   I never drank the Kool-Aid, though.

I grew my hair long and wore the hippie uniform - being an "individual" by dressing alike, as so many kids do today with their tatoos and piercings.  And I smoked the dope and took the attitudes of the hippies, that the police were "Pigs" and the system was crooked.  But like with many kids today, it was just posturing - putting on a pre-made package of ideas and attitudes.   Sort of like the way many young white kids in the suburbs pretend to be "Gangsta's" or "Rappers" and act all bad-ass, when they are more candy-ass.

And most of us discard these false disguises, early on, as we realize they really aren't who we are.  Finding yourself, as a teenager and young adult, is very hard to do, and thus it is often comforting to take on an identity or stereotype, as so many do.  There are expectations and actions, and a role to play, which can be comforting, even if the role is self-destructive.

For me, throwing off this artificial role took place when I was 18 and went to work for General Motors and got a haircut.   I realized that the whole concept of "share the wealth" and "let's all live together in peace and harmony" were nice in theory, but impossible in fact, due to this nasty little thing called "human nature".    All it takes is one guy to say, "I want more!" and there goes peace, harmony, and share-the-wealth.   No, no, the existing system, with all its flaws, was a better option.

My brother, being a raging "true believer" stayed on at the Commune for a decade more.  The rooms were better heated by then, but it was pretty much the same old B.S. - working for someone else's glory (the Guru by then had built himself a "big house" up the hill) with little or no pay, no health insurance, or 401(k) plan.   And I guess it must have been increasingly embarrassing for him to see his younger brother showing him up.   Being the youngest in the family, I cannot imagine how it would be to be the eldest - and have so many expectations thrust upon you.   And when the little bratty brother - the one you made fun of and mocked for being so much smaller and dumber and younger - ends up doing better than you, it must be pretty hard to deal with.

So he eventually left the commune.  Most do.  And in fact, if you look at the history of these communes, from the early days of our country, you see that eventually, most collapse over time, out of lack of interest.

I ran into some retired hippies the other day, who used to live on a commune, and today are millionaires.   And interesting transition, to say the least.   While it all started out fine on the commune, as a haven for artisans and artists, it quickly became apparent that a few people were bringing in all the dough, while a host of others were, well, not doing as well.  Human nature rears its ugly head.  The do-wells start to think they are working hard and paying for others to goof off.  The do-less think they are getting a raw deal when the do-wells ask for more.

Eventually, they left the commune, and after some pretty terse negotiations, were able to take their business with them.  They sold the business to major multinational corporation, and now can afford to retire in luxury.  A Capitalist success story if there ever was one, arising from the share the wealth philosophy of the Commune.  (This is not an anomaly, Oneida Silver started as a commune once).    But this illustrates that Capitalism, or the desire to reap a reward from ones' personal labor, is not some political theory or party, but rather an instinctive part of human nature.  No one wants to live as a slave.  No one wants to work so that others reap a reward at their expense.   This is pretty basic human behavior, not some high-flying economic theory.

Are there Hippies out there today?  Not really.  There are people who claim to be hippies, who are basically going through the motions and aping the behaviors (or perceived behaviors) of the era.  Sort of like when people dress-up for "60's Night!" on the cruise ship.    And there are a few original hippies who never got the memo calling the whole thing off.  They wander around, trying to relive the past, while trying to fit into a modern day reality that never really embraced the whole peace and love philosophy.

But the Hippie movement is dead.   Most of us grew up and realized we needed to take care of ourselves, and that taking care of ourselves was not selfish but rather a social obligation.   Living in a commune and doing drugs and all is fun, but it ends up creating a burden to our society, down the road.   If you grow old, having set nothing aside and having never toiled or labored to support yourself, then you are merely being a drag on society - a parasite.  This is not "sharing" but merely taking from others.

And most people figured that out.  And their own survival instincts, if nothing else, told them that this Hippie crap was a lot of nonsense - and they got out.

Of course, it sort of swung wildly the other way, by the late 1970's, as Hippies morphed into "Yuppies" and instead of decrying wealth, embraced it wildly.   And they decided that spending more and more on upscale designer junk and living the high life was the answer to everything.   Which of course, it was not.