How the Media Portrays Our Lives 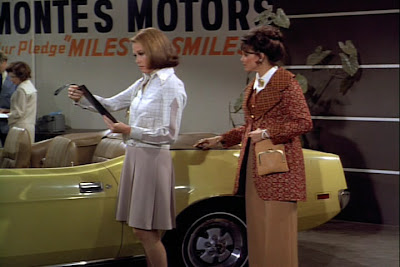 Mary Tyler Moore buys a new Mustang Convertible on her TV show.  On her salary?


One interesting aspect of the normative cues provided by television and the movies, is how they portray the lives of us "ordinary Americans".

In the movies and on TV, we all have brand new cars - and not cheap ones - and live in fabulous houses, often in expensive neighborhoods, on the salary of a secretary or some government slug.

The only exception to this rule, is when they want to make out someone to be "poor" - at which point they show that person driving a car similar to the crap that most of us drive - cars over five years old.

So Mary Tyler Moore, living on a modest salary at a television station, gets a new Mustang, and we are sold on the idea that a single girl living alone can afford to trade in her nearly new Mustang Coupe for a Convertible.  Sure, that could happen, on her budget.

Worse yet, nearly every sitcom has an episode where the main character buys a fancy car as the theme of the episode, but then later decides to "take it back" - as if a car were a pair of pants you could return for store credit.  The latest show to to do that was Glee, where the teacher buys  a Corvette to impress his estranged girlfriend, but then decided to "take it back" and get his old Honda clunker, which of course, has not been shipped off to a wholesaler.

Sure, that could happen.  The dealer has no problem taking a 20% hit on a new Corvette and pushing it to the used car lot.    WTF?

The Beverly Hillbillies was another sitcom where everyone got a new car every year - well, that is, except Jed Clampett, of course.  And we were carefully instructed as to which cars would fit our particular social class.  Mr. Drysdale, of course, had a brand new Imperial every year, while Mrs. Hathaway made due with a lesser Dodge or Plymouth - but she got a new one nearly every year.  On a secretary's salary.  Sure. 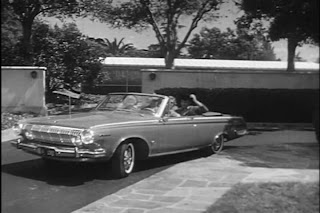 Miss Hathaway had a new convertible nearly every year of the show.  Was she embezzling from Mr. Drysdale?


How we are depicted living at home is also laughable as well.  When we lived near Washington DC, we used to get a hoot out of those spy thriller movies that they showed being set in the DC area.  Some low-level government flunky was shown living in a nice row house in Georgetown.  Yea, that could happen - a GS-11 employee living in a million-dollar row house.  Not!

And it was funny, too, if you watch the "making of" videos accompanying such movies or if you know the house in question, you saw how they have to take all the real owner's nice shit out of there and then put in more plebeian furnishings to make it look believable.  But the reality is, that guy ain't owning that house - he couldn't even afford the property taxes on it.

But having the hero live in a tract home in Burke and commuting to work in a battered Corolla for an hour every day just doesn't make for compelling movies.

The various other normative social cues they provide in the media about daily life are also misleading.  For example, most people are depicted as dining out in restaurants - a lot - and of course, they never seem to be concerned about the expense.  In fact, on most shows, people don't seem to worry about money at all - unlike most people in real life.

Of course, the exception is the "poverty show" such as Rosanne or the like, where the main characters are supposed to be impoverished or lower-class.  But even then, although the theme is poverty (as in the Honeymooners) every episode has the main characters squandering tremendous amounts of cash on some harebrained scheme.

Um, well, maybe that is an example of the media getting it right.  Except I think reality for Roseanne would have her going to a check cashing store, renting-to-own furniture, and obtaining payday loans.  But of course, you can't do that and portray it as negative - after all, those folks are likely to be local advertisers!

Eating is another example of where television skews the cues.  Unless the character is a "fatty" type like Drew Carey (People on television come in two types, impossibly thin and muscular, or incredibly obese), people are shown wolfing down the worst sorts of foods with no apparent harm to their well-being.

And of course the consequences of obesity are never discussed, even with the "fatty" types.  We never see Drew Carey's knees for example, or hear about his back problems.  But if you are 50-100 pounds overweight, you will have both.

Now, of course, some of you will say, "Well, Bob, its a television show!  It's a movie!  It isn't supposed to be real life!"  And there is some merit to that argument.

For example, if you are ever in a terrorist thriller situation and a huge bomb goes off, jumping up in the air and being blown forward (as they show in the movies) won't save you.  Your limbs will be torn off.  But in the movies and on TeeVee, the hero does this every time, with little or no ill effects.

Similarly, if someone shoots at you in real life, the bullet is traveling at many times the speed of sound, and no, you can't "duck" to avoid the bullet.

But both are typical movie and television cliches.

The point here I am making (and I did have one, when I started) was not that the people on television and in the movies intentionally deceiving us for evil purposes - well, they are, actually - but rather that regardless of whether it is escapist entertainment or not, people will draw normative cues from the actions of actors on television.

And the advertisers are counting on this.  Ford did not provide free cars (and no doubt, money) to MTM productions (Meow!) just to be nice.  They hoped that the exposure of the product - and the star using it - would help boost sales.

It is called product placement and I have written about it before.  It can be very subtle to most people, who don't even think about such things (and like the critics above, would decry even noticing such things as being "alarmist" or "overblown").

Does someone watching the Mary Tyler Moore show in 1973 run out and buy an identical Mustang the next day, because the Television programmed them like a robot?  Well, I am sure a few people did - and went to their Ford dealer and said, "I want one like hers!"  But that is a small minority of people.

No, rather, the real payoff for the sponsor is that people accept, under-the-radar, the idea that it is "normal" for someone on a limited salary to be buying a fairly expensive and impractical car (for a Minneapolis winter!) like a Mustang Convertible.

And yes, sometimes they sell the actual car - although the car-makers have been slow to figure this out.  Many movies and television shows of the 1960's and 1970's were showcases for particular models of cars.  It took Ford nearly 40 years to offer a "Bullitt" Mustang and cash in on the caché of that movie.

But Pontiac sold a lot of "Smokey and the Bandit" Trans-Ams, even if they weren't labeled as such (and Smokey, of course, gets a brand new one in every movie, which on a truck driver's salary, is of course rational). 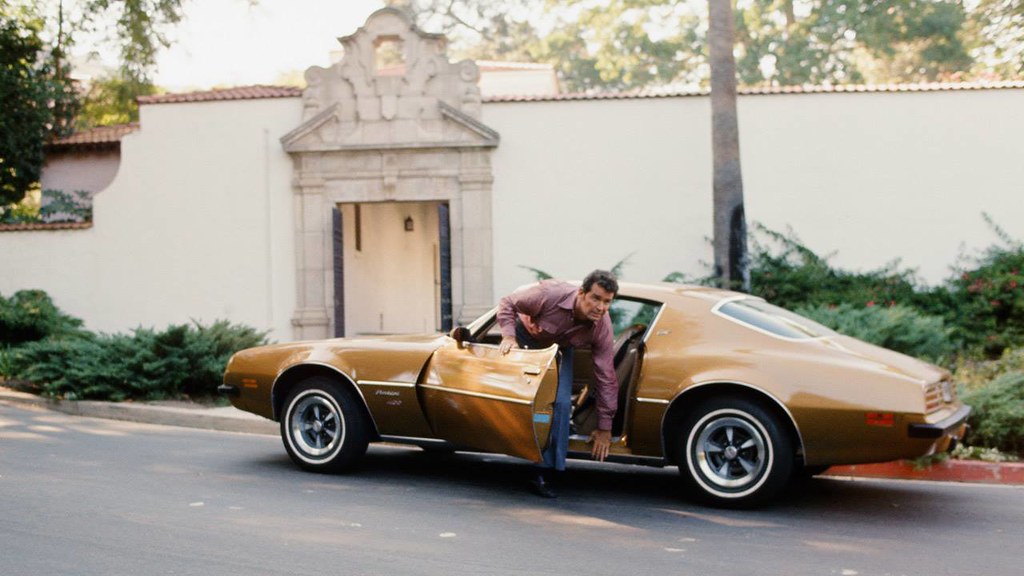 People did actually go to Pontiac dealers in the 1970's and say, "give me one just like Jim Rockford!"

But mostly, the normative cues are more subtle than that.  What they are selling is consumption - and a lot of it.  People in the movies and on TeeVee live much richer lives that you and I.  They spend a lot of money on cars, restaurants, and homes - and never seem to worry about the bills coming due.  And if we were to try to keep up with that standard of living, we'd have nothing in our retirement plans and a mountain of debt.

And that, in short, is what they are trying to sell us - a mountain of debt.

The answer of course, is to unplug from the media as much as possible.   It is impossible to watch several hours of television a day and not be influenced by it.   Your brain is being programmed, like the neural network it is, and pretty soon you are thinking that the "value meals" at McDonald's are a "value" and besides everyone else does it, so it can't be bad, right?