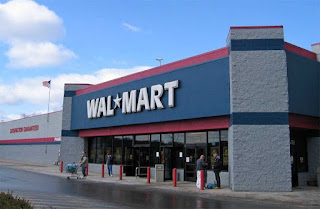 A middle-class lifestyle in America is pretty sweet, by world standards.  Yet many people, once they make twice the median income, spend twice as much, to get not a lot more.  Why is this?


I like to lead what I call the Wal-Mart lifestyle.  This does not literally mean I buy everything at Wal-Mart, but rather that I try to live down to a middle-class existence, rather than to live up to my income.  And I only wished I had done this sooner.

What do I mean by this?  Let me explain.

We have it pretty good here in America, despite what the naysayers think - and they want you to think bad things about our country and your situation, usually to sell you something, like a candidate.  But if you are an average middle-class American, chances are you are pretty well-fed, have a couple of nice cars, a house, air conditioning, a microwave, a computer, a cell phone, and all that junk that we Americans love.

And you can have all of this, on not a lot of money.

The problem is, when some of us start making more money, what do we do with it?  We go upscale. We get the "upgrade".  While we may have struggled as members of the middle class, driving a Chevy and wearing no-name jeans, when we make a couple of bucks, suddenly we think we need a Cadillac and designer clothes.

The problem is, all these "luxury" goods cost twice as much as what we used to spend - often far more.  And usually they are little or no better than what we had - certainty not twice as good, which you might think they would be, given they cost twice as much.

And many people have regrets about this, even if they don't say so directly.  On a BMW forum, I read all the time from people who bought BMWs brand-new (which is a very expensive proposition) and then whine and complain when they have expensive repairs out-of-warranty.   They realize, suddenly, that they spend $60,000 on a car, and it isn't likely to last twice as long as a Toyota costing $30,000 or less.  They paid a lot more, but didn't get a lot more.  And they realize that while they could "make the payments" on the car, they really couldn't afford to spend that much on a car in retrospect.

So they take out their frustrations on the dealer or BMW, whining about how their car needs repair. The constant refrain being, "Well, I paid $60,000 for this car, one would think it would never break down!" which is, of course, nonsense.

And of course, these cars can be inexpensive to repair, if you are handy with tools.  My front CV joint boot cracked, which is typical of any car at 130,000 miles.  I can replace the boot for $19, or the entire axle assembly for a whopping $70 (no kidding).   Of course, since I do the work myself, the labor is free.  The dealer wants a wee bit more - like close to $1000 - to do the same repair.

But if I was not handy with tools, I'd be driving a Chevy or Toyota in a heartbeat.  Why?  Because they are cheaper to buy, own, and repair.  Yea, I could "afford" to pay more for a car, but I would choose not to.

Apple products are a good example, as well.   A basic Mac laptop, or even a desktop, is going to run you a couple of thousand dollars.   A basic PC or PC-Laptop can be had for a few hundred.  Is a 5-10x delta in price going to give you five to ten times as much computing power?  Will it be five to ten times easier to use?  Heck no.  But you will be able to show off the iconic white notebook with the Apple Logo.  I am surprised it doesn't light up like the "angle eyes" on newer BMWs.   After all, what is the point of owning a status item, if no one knows you have it?

And so on, down the line.   We are tempted by the marketers to upgrade and go upscale, to show people and kid ourselves that we are "wealthy" when in fact we are accumulating little wealth, and borrowing staggering sums to have these things.

I was lucky, or smart, or both, in that I saw the writing on the wall before it was too late.  I stopped buying bling things, and cut back on spending - learning to live like the retiree I will someday be.  And I did manage to save some of the millions I made (literally) and was able to make a lot in Real Estate.

Others, well, they are less fortunate or less smart, or both.   They bought the mini-mansions and leased the cars, and thought they could finance it all by short-changing their 401(k).  And now it has all gone to hell and they want to blame someone else for it.  Obama.  The Republicans.  Take your pick.

But cheer up.  There is a bright side.  You can live very well and very inexpensively here in America.   Just adopt the Wal-Mart lifestyle.....
Newer Post Older Post Home